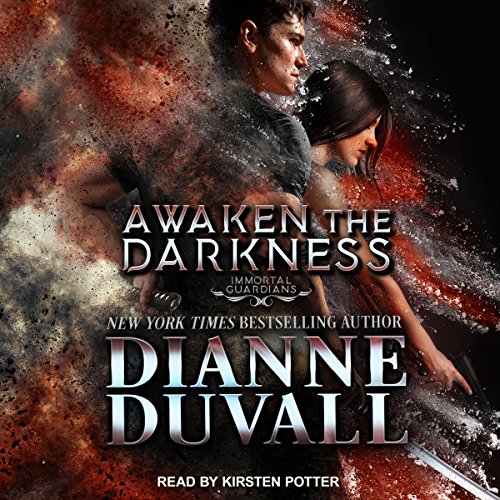 He awakens encapsulated in dirt with no knowledge of how he came to be there. Riddled with injuries, he can remember neither his past nor who he is. Nor can he remember what he is. But surely no mortal man could survive being buried deep beneath the earth. All he knows with certainty is that the soothing voice and presence of the woman moving around above enables him to endure the agony of his wounds. And he will do whatever it takes to be with her.

When Susan first sees the old two-story house for sale, such warmth and longing fill her that - against all reason - she makes an offer. It will take years of hard work and money she frankly doesn't have to fix up the place. So she can't explain why she bought it. She also can't explain what compels her to spend hours one night, digging in the basement until she unearths a man. A man who still lives and breathes despite having been buried alive. A man whose intense brown eyes glow amber with pain, declaring him far more than ordinary. Susan knows she should keep her distance. He has no memory and possesses gifts that would make most fear him.

But as the two work together to unravel the mystery of his past, she finds herself drawn in by his teasing nature and tender touch. So much so that she loses her heart to him even as they find themselves hunted by unknown enemies who are ruthless in their quest to capture them.

Sweet story, but nothing like the previous books. Least favorite of all books.
Think some of the reviews giving 5 stars are overrated. One of the best parts of the previous books is the interactions with all the other IG's. This book clearly lacked in this, and I have to say, as much as I like Stan, a whole book of just Stan was too much.
Hoping Seth's book includes all the IG's, not just Seth. The formula of all IG's is the best parts of the books.

Not as good as the others but great narration.

I’ve read all of the Immortal Guardian books, twice, and even though this was good it would never be a favorite of mine. Stanislav’s book was ONLY a love story. Oh, there were battles but only with humans AND all the others: Seth, David, Marcus and Ami and little Adira, Darnell, Sheldon, Lizette, etc, were only in the story in the last chapter. No vampire hunting, no nothing. Except for the few bad guys there was no one in the book but Stanislav and Susan, with the exception of Alexei Mikhailov, Stanislov’s second, who showed up near the end of the book when he found out Stanislov was still alive, after 2 ½ years of being buried in a basement floor.

As good as it was it was still disappointing. I always look forward to everyone from all the other books showing up and them all going out to the college campus’s to hunt vamps that prey on college students who were heading home drunk or just out to late.

There was explicit sex and the F-bomb was used 22 times.

As to the narration: In every book you just knew who was talking without being told. Kirsten Potter gave everyone their own voice in the 1st book, Darkness Dawns, and the characters still have that same voice in book #8. She is simply amazing.

Dianne Duvall wrote an amazing new twist to this Immortal Guardians series. This one is exciting. Stasis, failed memory, bad guys searching when you are out there without your immortal guardian buddies and firepower. And romance. This is such a good read. I was not bored at any time while reading or listening to this one. She gave back story but in such a way that I didn’t once flip pages. It is so very well done as I have come to expect. The audible version is fantastic and adds so much to the story. Narration is great. Such depth of emotion at just the right moments. Just enough “heat”. Well done!

Audible book review of Awaken the Darkness. The Narrator Kristin Potter was Outstanding as usual. The storyline not so much. I am so Happy that Stanislav is alive and has found love with Susan both of this characters have strong resemblances to the other Immortal Guardians and Gifted One in the prior books. Its like the names were changed but its the same character descriptions of prior IG and GO's. The story itself reminded me a bit of the 2nd book "Dark Desire" in the Dark Series by Christine Feehan, but that story was written a whole lot better then this one.

I missed the interactions of the other Immortal Guardians they don't find out Stanislav is alive until the very end of the story. Then its brief greetings. I love Dianne Duvall's Immortal Guardian and Gifted Ones series. But Awaken the Darkness is the weakest story in the series. So the story was just ok even though it didn't move the storyline along. Gershom is still out there waiting to attack the IG but he was silent in this story.


I trust Dianne Duvall so I am still giving the story 3 stars because I love having Stanislav back and I loved the little surprise at the end.

This book is not an immortal guardian and could not have been written by Dianne Duvall. The same words and phrases are repeated over and over.

I liked the story but i was a little disappointed at the end, needed more to tie in the book before, but im still looking forward to thr next one.

Great story and addition to the series :D

This was a great story and addition to the series. I will say that I've been wondering what happened to Yuri so it's nice to find out and see him get together with Susan. Yuri's story is somewhat of a standalone as the rest of the series characters don't come into it until much later in the story. And since he lost his memory, there are more explanations than there normally might be.

Susan is a woman with powers, the ability to hear the thoughts of others. This has often been as much of a curse as a gift and others finding out about Susan's abilities has brought much danger in the past. Susan keeps herself hidden and wants to find a remote home where people won't notice her and she also won't hear the stray thoughts of others.

When the story begins, Susan is looking for a house to buy that is remote. She visits one that's nice and remote but it's a real fixer-upper and she's unsure. But she just a feeling about the place that makes her want to buy it. A feeling that fades after she leaves the house but comes back with a vengeance whenever she's at the house. After some wishy-washy behavior, Susan finally decides to buy the house and moves in a while later. When Susan finds Yuri, she's freaked by the obvious issues with him being alive after being buried in the dirt for however long. Yuri doesn't have his memories and has no idea who he is or how he got there but he his instincts tell him it could be dangerous to call the authorities. Susan doesn't want to involve the police and decides to trust him since she's able to read his mind and knows that he's not lying to her and doesn't want to hurt her.

Susan and Yuri bond quickly...partially because they're very similar and work well as a couple and partially because they're in a situation together that requires them to rely on and trust each other. Susan's purchase of the house prompted some people to action and soon the bad guys that were after Yuri are intent on getting on capturing him. Since Yuri can't remember anything about his past, he can't call anyone for help and Susan is his only allie. Thankfully, Susan is able to take care of herself so she's a good partner for Yuri. Eventually, Yuri and Susan are able to figure out a way for Yuri to access his past and finally regain his memories. Once all that's taken care of and the bad guys are dealt with, Susan is welcomed to the "Immortal family" and the story ends with Susan and Yuri doing well and heading towards a HEA together.

I greatly enjoyed this story. I really liked Susan...she was smart, strong willed and competent but wasn't outrageously badass in an unbelievable way. I already liked Yuri in previous stories but didn't really know him well in those stories. In this story, I loved him and was so happy to see him get his piece of happiness. Overall, I loved the characters and the story was great and very engaging so I'd definitely recommend this story. :)

Never Give Up on Hope!

I was so glad that Stan survived his last battle and how he was found. Seth and the others never gave up looking for Stan and when he finally appeared -- the celebration was so heartwarming. I absolutely love this series and the world of the immortal guardians. I'm enjoying the journey of them battling Seth's biggest nemesis and how they each find their own eternal loves along the way. It's one BIG & HAPPY family.

I stumbled on to this series by chance and have loved each and every book. KEEP THE STORIES COMING!!

Dianne Duvall is one of my favorite authors and I love her books. Awaken the Darkness was ok. The first half of the book was slow and I had to keep re-reading. It started to pick up through the second half. Not enough interaction with all the immortal guardians. The continued relationships of this group are what make this series exceptional.

I was a little let down on book 8 wasn't what I waited almost a year for.

I was a little disappointed that this wasn't David story. It didn't have all of the immortals in it. I miss how they argue and joke around with each other. Not that the story line wasn't good. I just was looking for more. I hope the next book is David or Seth story. Please bring back everyone it's more exciting and interesting to read.