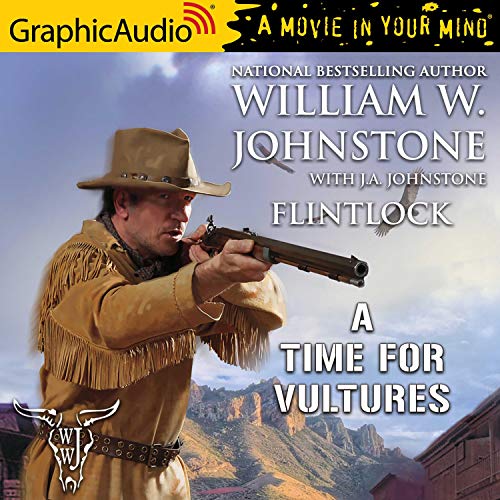 A Time For Vultures [Dramatized Adaptation]

Across the West, bad men know his name. The deadliest bounty hunter on the frontier, Flintlock is armed with his grandfather’s ancient Hawken muzzleloader, ready to put the blast on the face of injustice. As William and J.A. Johnstone’s acclaimed saga continues, Flintlock will discover an evil too terrifying and deadly to even name.

The stench of death hangs over Happyville. When Flintlock rides into town, he sees windows caked in dust, food rotting on tables, and a forgotten corpse hanging at the gallows. The citizens of Happyville are dead in their beds, taken down by a deadly scourge, and Flintlock must stay put, or risk spreading the killer disease. His quarantine is broken by Cage Kingfisher, a mad clergyman who preaches the gospel of death. He orders his followers to round up the survivors of Happyville and bring them home to face the very plague they fled. To save them, Flintlock must send Kingfisher to Hell. But the deadly deacon has a clockwork arm that can draw a pistol faster than the eye can blink. It will take the devil to bring him down. Or the frontier legend they call Flintlock.