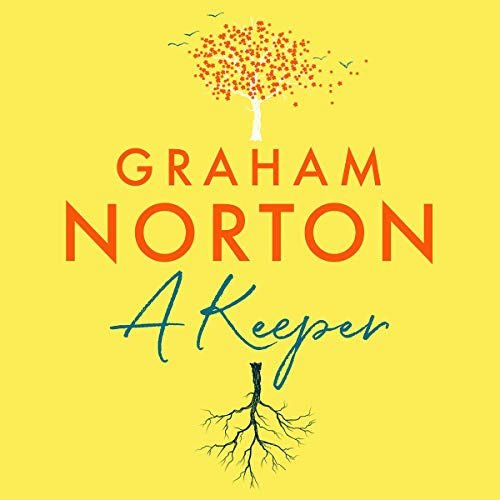 Shortlisted for the National Book Awards

Graham Norton's debut novel, Holding, was a Sunday Times best seller and loved everywhere. His new novel, A Keeper, is a twisted tale of secrets and ill-fated loves that once again demonstrates Norton's understanding of human nature and all its darkest flaws.

The mystery of Elizabeth Keane's father is one that has never been solved by the people of Buncarragh - not for lack of speculation. Her mother, Patricia, had been assumed a spinster until she began dating a mysterious man from out of town and within months had left Buncarragh and had married.

Less than two years later, Patricia was back, with a new baby in her arms but no new husband by her side and unbendingly silent about her recent past. A secret she would take with her to her grave.

Now, as Elizabeth returns to the village after her mother's funeral, bringing with her her own regrets and wounds, she finds a thin pile of ribbon-bound letters at the back of a wardrobe that may at last hold the key to her past:

Dear Lonely Leinster Lady,
I'm not really sure how to begin....

Praise for Holding, winner of the Irish Book Awards' Book of the Year 2016: "Poised and perceptive." (Sunday Times)

"A deftly plotted story as moving as it is compelling." (Sunday Mirror)

I only knew Graham Norton as the well dressed, slightly naughty, and delightfully funny talk show host.
I should not have been surprised that he could weave a tale with nice plot twists, endearing (ok, one was bat shit crazy) characters. Great narration, hearing his brogue takes me back to Belfast. Nicely done

This sucked me in completely from the start!

Loved this book! Please write more books, and I will buy every single one of them!

Funny, exciting, serious and mysterious. Graham is amazing at writing how woman think and describes things so perfectly you feel like you are with the characters. And listening to him read it is an extra bonus. I liked his first novel and I loved this one! Can’t wait for him to release another!

Thoroughly enjoyed this. I look forward to his next book. Rich characters, and he reads it so well.

The naration was perfect,
the story and writing as well. What a great book. Wouldn't change a thing. I would love to see more Graham Norton works on Audible. BIG fan.

the writing is only outshone by the narration.

fantastic story and very interesting characters. i loved every minute of it. such a talent!

Graham does a wonderful job of narrating his own book. I started listening to this and didn't want to stop. I very much enjoyed the story.

an intriguing and unique story. I couldn't stop listening to find out what happened next.

I’ve been in an Audible rut lately, unable to find an audiobook that can keep my interest. Well, Graham Norton to the rescue! The book was gripping and I found myself driving the long way home just to hear more of the story! I almost wish Mr Norton would give up TV and write full time.

Another splendid yarn by a genius with words, storytelling and performing. I almost wish Norton had begun his book-writing career earlier in his life so I could have a shelf of his works to keep me entertained. This one, as the title suggests, is “a keeper.” With a delightful ‘then” and “now” format, he tells us a story of a woman trying to put some affairs in order as she learns, through a series of startling discoveries, that nothing is as it seems. It’s a mystery that is unveiled in the same steps it is solved. I couldn’t seem to put it down when I suddenly realized that it was closer to being finished than I was. I will enjoy it many more times. What a treasure Graham Norton is!

Who'd have thought Graham Norton can write such charming books? Have always loved his show and was very curious how he would tell a tale of a woman finding a new past and a new future. With his great sense of humour and sensitivity - and obviously, imagination - this is a perfect much, a real treat!

Absolutely loved it, the story, the twists, the Irishness and of course Graham Norton's reading - I can only thoroughly recommend it!

Loved it, from start to finish.

I thoroughly enjoyed this book. A true page turner. I even shed some tears. Hope there will be a third novel from Graham.

captivating and with twists

this is yet another great story written and told by the amazing Graham Norton. he's a master of words with a great eye for detail.
Two stories told, both captivating and with twists.