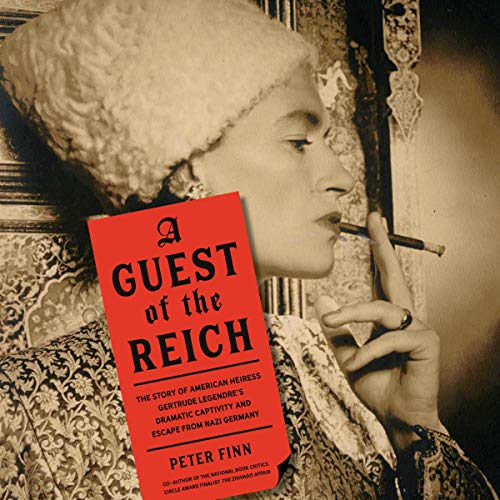 A Guest of the Reich

The dramatic story of a South Carolina heiress who joined the OSS and became the first American woman in uniform taken prisoner on the Western front - until her escape from Nazi Germany.

Gertrude "Gertie" Legendre was a big-game hunter from a wealthy industrial family who lived a charmed life in Jazz Age America. Her adventurous spirit made her the inspiration for the Broadway play Holiday, which became a film starring Katharine Hepburn. When the Japanese attacked Pearl Harbor, Legendre, by then married and a mother of two, joined the OSS, the wartime spy organization that preceded the CIA. First in Washington and then in London, some of the most closely-held United States government secrets passed through her hands. In A Guest of the Reich, Peter Finn tells the gripping story of how in 1944, while on leave in liberated Paris, Legendre was captured by the Germans after accidentally crossing the front lines.

Subjected to repeated interrogations, including by the Gestapo, Legendre entered a daring game of lies with her captors. The Nazis treated her as a "special prisoner" of the SS and moved her from city to city throughout Germany, where she witnessed the collapse of Hitler’s Reich as no other American did. After six months in captivity, Legendre escaped into Switzerland.

A Guest of the Reich is a propulsive account of a little-known chapter in the history of World War II, as well as a fascinating portrait of an extraordinary woman.

“Gripping.... As well-paced and exciting to read as a good thriller.” (Moira Hodgson, The Wall Street Journal)

“The life of a young woman named Gertrude 'Gertie' Legendre was so exotic that it sounds like the plot of a stage play or a motion picture.... Her saga is like no other.” (Jonathan Kirsch, The Washington Post)

“A vivid chronicle of the waning days of Nazi Germany, when a country answered for its own hubris and one American woman witnessed the nightmare.” (Mary Ann Gwinn, Minneapolis Star Tribune)

This woman seemed like a self absorbed brat ... it’s a shame women of more character during the war were not written about

Really fascinating piece of history but the lack of balance offered by the author of this narcissistic sociopath "first American female POW in WWII" leaves one felling incomplete. Surely there were some additional insights from those who she dragged into her experiences that could have offered to present a broader, likely, more complete biography??

Fascinating woman in a horrible period in history

This book was fascinating. The time in history in which she got caught is almost as interesting as how she lived her life...nanny raising her kids, husband living in Hawaii, free to roam the globe at will and curious to get close enough to the war to hear gunfire. Oops.... It is a good listen. I just wish there was more....

Rebecca Lowman sounds distinctly disengaged or detached to the text she reads. Or someone told her to read slowly. something is not right.

well drawn characters, intriguing glimpse into an American socialite's world. What arrogance and eye popping bigotry. Always morbidly fascinating to learn more about the German Reich. The story was one I had never heard before.

To me there was not enough info on her captivity and way too much info how self-absorbed in her life before capture. Some gaps in info but maybe info couldn't be found. I stuck with it until the end but I found her still self-absorbed all the way thru, using all available channels to her to get to Hawaii where her husband was based.....just seemed that the rules of order she felt didn't apply to her

A very interesting story insofar as Gertrude is one-of-a-kind. The story of the actual capture in Germany is not enough for an entire book, but it is nicely filled out with her background as a wealthy adventure-seeker. The narrator does a good job except for the occasional annoying mispronunciations (Army V Corps pronounced as "Vee" and not "5th"; unusual pronunciation of Cologne Germany, etc.). Lots to criticize Gertrude as a person, but that not the function of a book review.