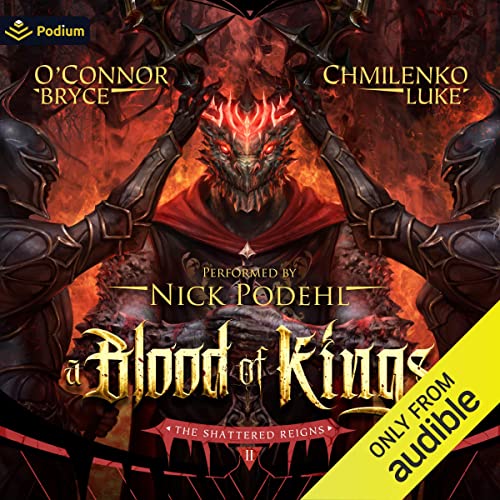 A Blood of Kings

Ryn has fallen. Ester could be dying. Bonner is too far away to help.

No matter how Declan Idrys looks at his situation, he comes to the same conclusion every time: He is about to die at the hands of the first dark elf seen in 700 years. Fate, fortunately, is not so cruel, though, and after barely surviving this initial encounter with the er’endehn of Eserysh, Declan and his friends find themselves in a tentative truce with the war-loving elves. They share a common enemy, after all, and their mutual hate for the Endless Queen and her growing legions is enough for the two groups to set aside their mistrust for one another, if only for now.

Sehranya, however, is not one to rest easy while her enemies join forces, and Declan and his companions soon find themselves assaulted by new horrors as they set out to make at last for the legendary city of Ysenden in truth.

But the queen has made a mistake. Within Declan the slumbering might of his line is at last stirring, prodded into life by the guiding hands of Bonner yr’Essel. Fire. Power. Strength. Sehranya will rue the day she did not throw everything she had into slaying the one of King’s blood....

Let award-winning voice artist Nick Podehl capture your imagination as you dive into the much-anticipated next installment of The Shattered Reigns, a best-selling fantasy series written by two authors at the top of their game.

another predictable book from Luke and Bryce and by that I mean I predicted that it would be awesome and it was! Great story as always Luke and Bryce are fantastic with everything they do. Nick is great one of the top narrators he really brings books to life!

It's great. Well worth the wait. These authors never fail. Narration is epic as always.

What a horrible ending. I hoping for a third book. If not I’m very disappointed. There is no justice if the story ends like this.

Sorry, but this is simply no where near as good as the first one. Nick Podehl does an AMAZING job narrating, as usual! This book was lackluster at best. Some of the story line is just plain stupid, especially the ending. I’ll listen to it one more time in a couple weeks to see what I think, but there were about a dozen times I had to relisten to a specific part multiple times, usually the most important parts, because my mind was wandering. Hopefully the next one will be better. I do, 100% recommended the Stormweaver book that is previewed at the end… it’s one of the best books I’ve listened to in the last couple years!

Like the role of dragons in this story along with the key characters. I think the series would bode well in film.

Average story with much potential

Story progesses far to slowly. Most twists are apparent to everybody, except the somtimes underperforming MC. This really diminishes an otherwise interesting story greatly. I was ready to drop this series from my 'to read' list - until it became more interesting again in the last chapters. But please, dear authors, pick up the speed! We do not need to know every thought that goes through MC's head. Instead do give his intellect some credit and let him understand what every reader has known for hours!!