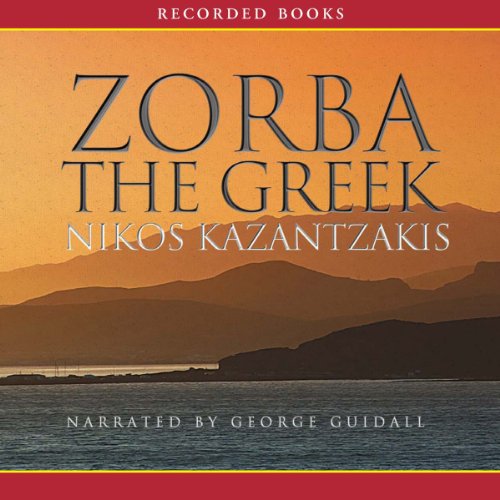 A wonderful tale of a young man’s coming of age, Zorba the Greek has been a classic of world literature since it was first translated into English in 1952 and made into an unforgettable movie with Anthony Quinn. Zorba, an irrepressible, earthy hedonist, sweeps his young disciple along as he wines, dines, and loves his way through a life dedicated to fulfilling his copious appetites. Zorba is irresistible in this charming audio production by veteran narrator George Guidall.

Drink life to the lees

I listened to this book and loved it so much that I obtained a copy and read it as well. It is definitely a top tier Audible read. The performance is excellent, with echoes of Anthony Quinn in the inflections of Zorba.

Zorba the Greek is a clamorous ode, played with wild abandon on the Greek santori about the fundamental contradiction which is the human soul. Zorba is a character who embodies the force within the human breast to live life at full-tilt with eyes wide open, nostrils flared to miss no smell, a dog joyously hanging his head out a car window taking every sensation into his being. Zorba lives every moment in the moment, fully engaged with his experiences. He possesses a pithy, folk wisdom which cuts to the heart of every issue, but doesn’t waste time with books. He lives life, he doesn’t read about living. This is the central conflict in the book. The narrator, a bookish native of Crete, hires Zorba to run his lignite mine. He is writing a book on Buddhism and contemplates how to live: let go of human desires to reach a higher plane above human suffering. He uses reason to create a protective barrier between life and his soul. Zorba represents direct engagement with life, with the very desires and urges the narrator seeks to overcome. Over the course of the book, Zorba convinces the narrator to live more from his heart by force of example of his joyous embrace of life, but he can not change the essential nature of the narrator, the boss. Each of us has his and her own boss, their inner voice of rationality. Zorba throws up his hands and proclaims, from a heart filled with a deep and inextinguishable love, “There surely must be a hell for a few pen-pushers like the boss!” (p. 306)

Born in Crete in 1883, Nikos Kazantzakis was compelled and tormented by ultimately unanswerable religious and metaphysical questions. Kazantzakis studied law in Athens, philosophy with Henri Bergson in Paris, Buddhism in Vienna, and spent time in a Greek monastery. After traveling widely and publishing many well received travelogues, he started writing novels as he approached 60. These novels, including Zorba the Greek, Freedom and Death, and The Last Temptation of Christ, struggle to articulate ideas about God, human freedom, and human rationality warring against the basic animal nature of the human creature. Kazantzakis wrote in Demotic Greek in a Cretan dialect, creating a small audience for his works, but holding true to his passion for his roots in Crete. He was anathamized by the Greek Orthodox Church in 1955 and The Last Temptation was on the Vatican’s Index of Prohibited Books. He died in 1957.

This is a book told with compassion for humans pulled in opposing directions by the contradictory desires of the heart and the mind. Zorba is one of the great characters of world literature, an inherently lovable bull-like force of nature. The beauty of Greece, the sea and mountains, the smell of thyme growing wild on hillsides, the taste and texture of bread, wine and olives, the sound of the santori, Zorba’s endless sexual passion, and the wild abandon of Zorba’s animal soul expressed by his primal dance full of defiance and obstinacy, are all inseparable elements of Kazantzakis’ vision.

His prose is filled with aphoristic phrases which perfectly capture the beauty and pain of the human condition. After the death of a soul mate who dies far away in the Balkan war, the narrator writes: "Luckless man has raised what he thinks is an impassable barrier round his poor little existence. He takes refuge there and tries to bring a little order and security into his life. A little happiness. Everything must follow the beaten track, the sacrosanct routine, and comply with safe and simple rules. Inside the enclosure, fortified against the fierce attacks of the unknown, his petty certainties, crawling about like centipedes, go unchallenged. There is only one formidable enemy, mortally feared and hated: the Great Certainty. Now, this Great Certainty had penetrated the outer walls of my existence and was ready to pounce on my soul." (p. 297) The narrator’s dance through this world, as with us all, careens between moments of joy, beauty, wonder, and those of pain, sorrow, failure and death: "As if in the hard, somber labyrinth of necessity I had discovered liberty herself playing happily in a corner. And I played with her. When everything goes wrong, what a joy to test your soul and see if it has endurance and courage! An invisible and all-powerful enemy-some call him God, others the Devil, seems to rush upon us and destroy us; but we are not destroyed. Each time that within ourselves we are the conquerors, although externally utterly defeated, we human beings feel an indescribable pride and joy. Outward calamity is transformed into a supreme and unshakeable felicity". (p. 291-2)

This book is a revelation for its spiritual depth, its evocation of beauty (and its opposite) and the portrait of its passionate hero, Zorba. Listening to this, I experienced the greatest sense of well-being and the greatest heartbreak - to the point of tears. The narrator, George Guidall, is great, as always - one of the best readers I've had the pleasure to come across.

I’m only an hour into this book (the story line of which is old hat) but I’m at this stage already prepared to proclaim without fear of being gainsaid that as compared to any of my hundreds of Audible listens (or for that matter any other audiobook) George Guidall ‘s narration Of “Zorba the Greek” is by far the most exciting, spell-bounding, breath-taking, electrifying, engrossing and emotionally original and honest. His voice's overlapping and oscillating with great ease and smoothness from the speech of one character to that of another is like trying to figure out what melody begins and ends where or when in a contrapuntal Bach tune.

Narration does full justice to the book!

WONDERFUL! BOOK IS SO GOOD IT'S A CLASSIC. NARRATION IS SO GOOD THE NARRATOR ASSUMES THE ROLE OF EVERY CHARACTER AND BEAUTIFULLY RENDERS THE STORY. SUPERLATIVE PERFORMANCE.

The narration made it worthwhile

Would you recommend Zorba the Greek to your friends? Why or why not?

Yes. The book because I have such mixed feelings about it, I want to know what they make of it. The audiobook because the narration was pitch perfect.

He gets the characters so well, it is hard to imagine it could have been any other way than the way in which he has narrated it. I simply love his performance (in this book as well as American Gods).

Could you see Zorba the Greek being made into a movie or a TV series? Who should the stars be?

Surely, as a matter of fact, it already has been.

I am not reviewing the book, as I am willing to grant that my inability to enjoy stems from my not "getting" the book completely. But it is hard to oversell Guidall.

The narrator was excellent in his timing, phrasing and assumption of different characters.
The story is a classic. I saw the movie with Anthony Quinn, years ago, x2. So glad to hear the book.

A Life Worth Emulating

This book is so much more than a story, it is a formula for living truly and enjoying life. so much better than the movie, this story really hit you in the heart wakes you up.

Zorba and Boss a relationship of two opposites

I saw myself in the character portrayal of the boss and am searching to become more like Zorba. Lots of life lessons thrown into a very entertaining story. Loved it.

Best Narration of Any Audible Book I've Ever Heard

Two philosophers opine about the world, life, religion, love, etc. One is an old man who has traveled far and wide personally experiencing life to its fullest. The other is a younger man who determines his theories of life, death and nearly everything else based primarily on the books he's read. The two men meet and become fast friends. I thoroughly enjoyed the book in so many different ways and for so many different reasons. The narration is the best I've ever experienced in an audio title. Highly recommended.

A contemplative character sketch of a hedonist

I bought Nikos Kazantzakis' "Zorba the Greek" after listening to George Guidall's engaging narration of Ellie Wiezel's "Night" and because I have read about this book in 1995 years ago when Scorsese's 1988 film "The Last Temptation of Christ" based on Kazantzakis' book with the same name was released in South Africa. I was not sure what to expect of this book, but as it is a classic in world literature, I hoped that it would carry my mind away to somewhere it haven't visited yet.

Alas, I am a bit disappointed. "Zorba the Greek" tells the story of the narrator, an intellectual of some sort, meeting a Macedonian Greek, Alexis Zorba, in his 60's that changed his outlook and understanding of life. The theme around which the book revolve is "being a true human."

Alexis Zorba lives a hedonistic lifestyle which is anchored in the genuineness of experience and not complicating the world for himself. The narrator a reader of Dante and the Buddha's wisdom are temped to discover Zorba's simple lifestyle. The book does not seem to have a strong plot. It is driven by the narrative between Zorba and the narrator. Life questions seems to be the order of the day: "Why are we here boss?" "Why do people die?" etc.

Religion (especially Christianity) more or less brushed aside as superstition. The essence of life is in living it to its fullest and forgetting and remembering selectively or maybe without making too much of the bad things in life.

The book feels like a modern Job. Yet the reader is left with questions in the absence of God or the Devil - which is deemed to be the same.

I think that there are some dissonance between my world-view and that of Kazantzakis. I really struggled to identify with Zorba or the narrator. The lack of a proper developing story place it very much in the same category as Marcus J Borg's novel "Putting Away Childish Things - A Novel of Modern Faith." Don't expect a roller-coaster ride with any cliff-hangers. The most exciting things that happened was a voluptuous widow being murdered and brother Zacharias, a monk, setting a monastery aflame and a contemplation about death in the face of death.

George Guidall read the book very well, but I had difficulty listening to it, maybe because it didn't feel so real as Ellie Wiezel's "Night" ... ? Like most Recorded Books productions, the production is superb.

"Zobra the Greek" is for someone who likes to contemplate live and can easily accept an hedonistic approach of "let it be." While it might involve some people emotionally and imaginatively, it failed to thrill.

One of the best if not the best novel I have ever heard, a jeurny in the mind of a Jenius

Live your life to the fullest, just as Zorba did. A must read/listen. ... just a few more words...