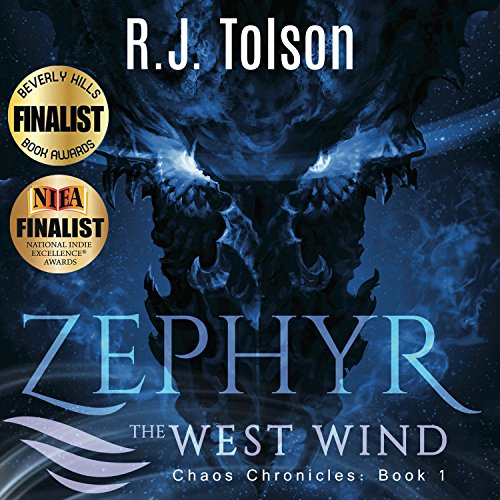 Zephyr the West Wind: A Tale of the Passion & Adventure Within Us All

Seventeen years ago, in the island village of Dentro, lived a large and powerful demon. With just a howl, mountains were obliterated. With the help of an outsider, the chief of Dentro destroyed the demon and sealed its dark power within three powerful ancient weapons: a spear, a shield, and a sword.

After leaving the unwelcoming village, the man who had helped destroy the demon took the sword in an effort to keep the village and its people safe. Months later, a villager bore the son of the outsider. Carrying the child of a stranger was in violation of a sacred village law, and everyone knew whose child the boy was.

Born into a village filled with hateful people, Zephyr grew up not knowing why he was so hated. With no friends and eventually no family, after the passing of his mother, Zephyr was forced to survive by himself as an outcast. Zephyr's only wish was to make his mother proud and force the village to recognize him - while surviving in a world filled with demons, paranormal abilities, love, hate, and undiscovered lands.

Ce que les auditeurs disent de Zephyr the West Wind: A Tale of the Passion & Adventure Within Us All

I regretted this purchase almost from the second I pressed play. Sound quality sucks and the story is childish. Save your credit and don't waste your time on this one.

He talks to fast

This book is practically Naruto

With a couple and I stress couple differences this is Naruto and Sasuke. Same basic abilities same basic back stories. I seriously think the author should be sued. I won't be getting book 2

Chaos Chronicles for the win!

If you could sum up Zephyr the West Wind: A Tale of the Passion & Adventure Within Us All in three words, what would they be?

The carefully crafted verbiage of each sentence made visualizing the book's events effortless! With the edition of character voices, it was as if we were characters in the book as well who had access to Zephyr's mind.

What does Gregory Peyton bring to the story that you wouldn’t experience if you just read the book?

The edition of character voices inspires creativity to readers. We make assumptions of looks with the text, but the added vocals makes visualizing characters even easier.

The one moment in the book that literally moved me, made me physically get out of my seat in shock, was when Leon was reintroduced to his brother Blane, and the battle that followed...chills!

Really enjoyed listening to the Zephyr The West Wind soundtrack as well!

Kind of let down

The winning of awards that are stamped on the cover gave me some hope, but I did not really enjoy the book. The characters were one dimensional. Evil guys were really evil mostly and good guys were saints. The book also felt very rushed. Love is almost instant, training takes only 3 months, and a bunch of little things. I would not continue this series.

If you have any knowledge of manga and/or anime you can see where this book got all of it's material from (or more like plagiarized the material) cough naruto, bleach. I mean at least plagiarize good anime and not that *****, and this actually got awards. I won't give the narrator a bad review they did a good job.