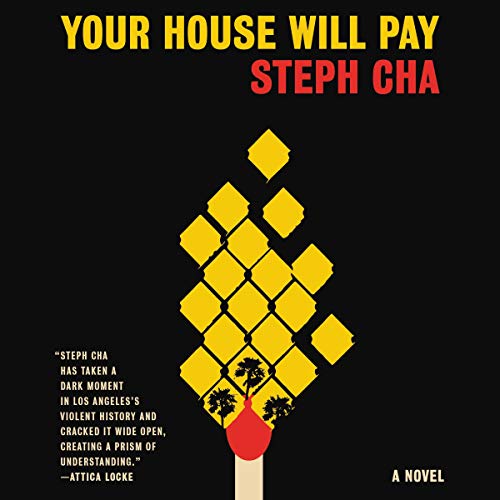 Your House Will Pay

Your House Will Pay

In the wake of the police shooting of a black teenager, Los Angeles is as tense as it’s been since the unrest of the early 1990s. But Grace Park and Shawn Matthews have their own problems. Grace is sheltered and largely oblivious, living in the Valley with her Korean-immigrant parents, working long hours at the family pharmacy. She’s distraught that her sister hasn’t spoken to their mother in two years, for reasons beyond Grace’s understanding. Shawn has already had enough of politics and protest after an act of violence shattered his family years ago. He just wants to be left alone to enjoy his quiet life in Palmdale.

But when another shocking crime hits LA, both the Park and Matthews families are forced to face down their history while navigating the tumult of a city on the brink of more violence.

“With Your House Will Pay, Steph Cha has taken a dark moment in Los Angeles’ violent history and cracked it wide open, creating a prism of understanding - of the pull of generational violence and its enduring devastation, but also of the power of human grace against all odds. It’s a touching portrait of two families bound together by a split-second decision that tore a hole through an entire city.” (Attica Locke, Edgar-Award winning author of Bluebird, Bluebird)

Rage tore through the streets of LA following the infamous "Rodney King verdict" - the acquittal of a gang of police officers who were captured on videotape brutally and with reckless abandon beating an unarmed man within an inch of his life. Your House Will Pay is the story of a black family and a Korean family whose lives were forever changed during this period. The novel captures the tension and insanity of that horrible moment and brings into focus the damage wrought by the violent eruption following the King verdict.

In Your House Will Pay, Cha highlights the oppositions that existed in the LA community--oppositions seeded by racism and oppression. As the story unfolds, we see the ways the tragedies and injustices are woven into divergent life stories and ultimately complicate the truth of innocence and guilt.

Cha's a phenomenal storytelling captures aspects of both black and Korean family life with knowledgeable care. Narrators Glenn Davis and Greta Jung bring the stories to life. Davis's performance is particularly notable as he allows fluid and natural black English intonation that stays true with shifting between standard and vernacular, yielding a style that sounds authentic His voice is relaxing, easy to listen to and never sounds over performed. Jung's performance of Korean, and Korean accented English is also very natural and never mocking or awkward.

Both in the language of the characters and in the unvaling of their lives, Cha refuses the easy temptations of stereotyping and reduction, creating rich characters who inhabit complex worlds peopled with humans--no martyrs, no villains. She portrays characters' realistically complicated attitudes toward race and towards the justice system, towards family and faith. The story also effectively illustrates some of the ways incarceration impacts families.

Cha also provides an honest treatment of the competing courage and vanity, commitment and ambivalence that are quite real among well-meaning youthful justice warriors.

Cha's powerful writing will open your heart to lives you may think you cannot imagine. Through her masterfully moving and vivid language, you will see. Your House Will Pay lays bare the impacts violence and hatred while simultaneously inviting readers to consider the impacts of the violence and hatred of turning away from injustice (and the irony of turning away under the privileged protection of injustice).

Beautiful prose makes a book that's topic I wasn't sure I'd like, a story I liked very much.

I don't know if you can say you enjoy a book about racism and gun culture, but this book was excellent. The characters were really well done and the story was riveting from the very start. I really enjoyed listening to this book. The narrators did an great job.

The mix on lines they clearly slugged in are way off and there are at least half a dozen lines from the book missing.

I loved this book!!! Steph Cha's writing is beautiful and insightful. And the narration by Glenn Davis and Greta Jung was perfect and allowed me to visual the story as if I was watching a movie. I'm now also looking for more books narrated by Greta Jung just to hear beautiful voice and perfect diction.