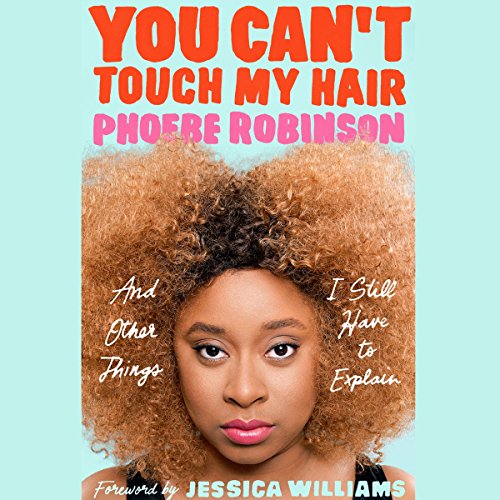 You Can't Touch My Hair

"A must-read...Phoebe Robinson discusses race and feminism in such a funny, real, and specific way, it penetrates your brain and stays with you." (Ilana Glazer, cocreator and costar of Broad City)

Being a black woman in America means contending with old prejudices and fresh absurdities every day. Comedian Phoebe Robinson has experienced her fair share over the years: She's been unceremoniously relegated to the role of "the black friend", as if she is somehow the authority on all things racial; she's been questioned about her love of U2 and Billy Joel ("isn't that...white people music?"); she's been called "uppity" for having an opinion in the workplace; she's been followed around stores by security guards; and yes, people do ask her whether they can touch her hair all. The. Time. Now she's ready to take these topics to audio - and she's going to make you laugh as she's doing it.

Using her trademark wit alongside pop-culture references galore, Robinson explores everything from why Lisa Bonet is "Queen. Bae. Jesus" to breaking down the terrible nature of casting calls to giving her less-than-traditional advice to the future female president and demanding that the NFL clean up its act, all told in the same conversational voice that launched her podcast, 2 Dope Queens, to the top spot on iTunes. As personal as it is political, You Can't Touch My Hair examines our cultural climate and skewers our biases with humor and heart, announcing Robinson as a writer on the rise.

Read by the author, and featuring additional narration by Jessica Williams and John Hodgson

“A must-read.... Phoebe Robinson discusses race and feminism in such a funny, real, and specific way, it penetrates your brain and stays with you.” (Ilana Glazer, co-creator and costar of Broad City)

“Phoebe Robinson has a way of casually, candidly rough-housing with tough topics like race and sex and gender that makes you feel a little safer and a lot less alone. If something as wise and funny as You Can't Touch My Hair exists in the world, we can't all be doomed. Phoebe is my hero and this book is my wife.” (Lindy West, New York Times best-selling author of Shrill)

“You Can't Touch My Hair is the book we need right now. Robinson makes us think about race and feminism in new ways, thanks to her whip-smart comedy and expert use of a pop culture reference. The future is very bright because Robinson and her book are in it.” (Jill Soloway, creator of Transparent)

Would you listen to You Can't Touch My Hair again? Why?

I don't normally write reviews, but after the promos on 2 DopeQueens (which I love), I went to download this audiobook and was a bit astonished that, despite the super high star rating, all the reviews that were showing up were so damned negative!!! I almost didn't download it (I needed something fun to get me through the drive home from family thanksgiving), then I remembered, Phoebe is awesome, and I want to hear what she has to say.I'm a 42 year old divorced white lady. Phoebe says a lot that ring true to me about the experience of being a lady and from knowing POC. She also says a lot of things that I didn't know from the perspective of a POC, that I found enlightening. I am really, really grateful for all that she says. YES, the cadence of this book is a bit rough if you are used to Phoebe from 2 Dope Queens, where she feels just off the cuff. In this audiobook, you can definitely feel that she's reading -- but, she's reading her book, and I'm okay with that. One review I read suggested reading it at 1.1 speed-- unfortunately, my app only broke down to 1.25 - which was okay for awhile (1 chapter), then when I could hear in her voice that genuineness that we know and love, it was weird. YES, she's 31 and the fact that she bemoans being old makes those of us older feel like sorry old sacks. I remember feeling the same way. It's not really a thing that she's her age. It's who she is. Those of us that are now older were there, and remember it, if we're honest. YES, there are a few minor points where things get a bit dry, and, more to the point, feel like Phoebe is reading us a part of her college thesis instead of just engaging us and then backing her points up with facts.THOSE ARE MINOR POINTS, however, given the overall spectacular engagement I felt with Phoebe and this book. I think she brings people in to consider other experiences, explains them with grace and humor, and most of all, makes us laugh while we understand more about our shared human experience. Phoebe, I really enjoyed your book, and your reading of it, even though I'm not the intended audience. And, seriously, screw the assholes who don't get it.

Would you listen to another book narrated by Phoebe Robinson?

Not unless she wrote it

I'm too old for this book

I definitely struggled to listen to this book. I tried, believe me, I tried. But I'm part of that last group of boomers, born 13 years after the end WWII. I could understand the "don't touch my hair" part because I went through that A LOT of that in the early 70s, when I was wearing a 'fro. White girls would help themselves to touching my hair, until I trained them to stop doing that But that's pretty much where the similarities end. I have two Millennial daughters. Maybe they would enjoy this.

Firstly, I loved the contents. As a Mexican immigrant catching up with American culture, with fair skin and a diverse friend group, I found this very informative. As a fan of 2DQ and SMWG, this book did not disappoint.

With regards to the performance, it felt painfully slow and almost gave up and switched it for the print copy. I am a big fan of both if Phoebe's podcasts so I am used to listening to her speech (which I love) but the cadence on the audiobook felt off. I sped it up to 1.1x and voilá!

Nonstop laughs and all the feeeeels

Phoebe most beautifully and hilariously describes ways in which we all need to lady up and address societal and individual issues such as racial inequities, gender stereotyping, and self care. It's incredible to hear someone openly and positively talking about these crucial issues, and I cannot explain how much I appreciate hearing them from another young woman's perspective. (Oh yeah, phoebe explains the importance of this. Because she's the best.) This book is absolutely necessary for every woman and POC wanting to see their experience reflected back, and should be listened to by everyone to gain perspective but also because it's so freakin' funny! I listened to this book straight through, totally absorbed as if in the best kind of convo with my best friend. Thanks phoebs!! <3

Most good comedians are funny regardless of your beliefs or political stance. This is an exhaustingly one-sided book that complains about racism in the country while being one of the most racist books I've read. The book simply forces an opinion and is degrading if you disagree. The author is panders to a certain audience, and maybe I'm the only idiot outside of that audience to try and enjoy her book. Then again, I'm sure she'd just assume I'm racist.

Listening To This Audiobook Was A Good Life Choice

Drop everything and run (don’t walk) to the nearest recording of Phoebe Robinson's You Can’t Touch My Hair. Look, I love essays by funny ladies. You could even say they’re my jam. Well, all my past faves pale in comparison to this hilarious new collection of essays about feminism, race, pop-culture, and being a black woman in America. Phoebe Robinson is funny and poignant literally 100% of the time (how?!), and the audiobook is bananas phenomenal (with tons of ad libs you won’t find in the print version). Listening to this audiobook was a good life choice.

I was annoyed regardless of how much I should have been able to relate.

This book hands down is the most annoying book I have ever listened to on audible. Really thankful I didn't pay for this. Her voice, her story telling ability, her attempted comic relief overkill... it was just too much. Really cute how her work wife opened up for her.. reminds me of when someone swears a story is hilarious before they tell it but it NEVER IS. She just seems very knowledgeable yet out of touch at the same. I'm 8 chapters in and I am going to try my best to finish. My ears are like literally cringing. I feel like I'm getting nothing out of this.. no aha, exactly, you feel me, I couldn't have said it better myself moments.

Phoebe Robinson opens the door to her world in this funny, but real, way.
Her opinions on everything from certain older, white gentleman, to very politically sensitive issues really reach to the core of who we are as a society and raise the question of whether or not we are headed in the right direction. Ant good story can make you think fondly about ups and downs of the characters, but it takes a truly great book to encourage the reader to be introspective, especially without asking direct questions. Thanks Pheobs!
p.s. If you ever come to Colorado on tour, you HAVE to check out The Chocolate Therapist in Littleton, for some wine and chocolate pairing... I get the feeling you would enjoy it.

This book feel short. The author's tone and reading method made it sound like she was trying too hard, which makes the book hard to listen to. Secondly, the content of the book goes off in too many directions (with pop culture references and/or side commemts) while making every point. It is just too extra.

Michelle Obama should read this book!

This book was everything I was hoping for and also way more. As a disabled black woman I found it fun and entertaining; and I loved how Phoebe Robinson was able to verbalize do many things that I try to explain to people everyday.
A must have for any SJW 😊