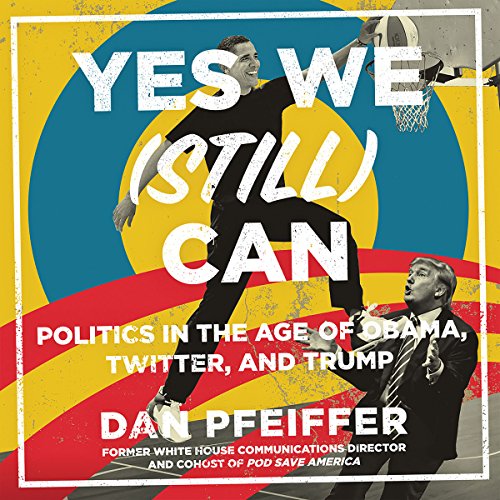 Yes We (Still) Can

From Obama's former communications director and current cohost of Pod Save America comes a colorful account of how politics, the media, and the Internet changed during the Obama presidency and how Democrats can fight back in the Trump era.

The Decade of Obama (2007-2017) was one of massive change that rewrote the rules of politics in ways we are only now beginning to understand (which is why we all got 2016 wrong). Yes We (Still) Can looks at how Obama navigated the forces that allowed Trump to win the White House to become one of the most consequential presidents in American history, why Trump surprised everyone, and how Democrats can come out on top in the long run.

Part political memoir, part blueprint for progressives in the Trump era, Yes We (Still) Can is an insider's take on the crazy politics of our time. Pfeiffer, one of Barack Obama's longest serving advisors, tells never-before-told stories from Obama's presidential campaigns to his time in the White House, providing listeners with an in-depth, behind the-scenes look at life on the front lines of politics.

Dan Pfeiffer is a moving writer, even if he doesn’t think so. His tales of the Obama campaigns and presidency are not all riveting, nor are they meant to be. But they convey the day to day hard work of putting your shoulder to the wheel and changing the world. Thank you.

Glad Dan read this himself

I feel like I have come to know the PSA guys listening to their many podcasts. It feels more personal and frank to hear Dan narrate his own story. Plus he’s a funny guy and so genuine. From a boomer who loves these guys. Even Lovett

This was a great book. I laughed and cried. I really only got interested into politics in 2015 and this is a great book to learn about the Obama campaign and other thing that happened while I was in school and not caring about politics.

The content of the book is fine, and is pretty much exactly what any listener of Pod Save America would want and expect this book to be. The narration is also fairly good; Dan clearly is used to a microphone. My only significant gripe with the book is that, IMHO, Dan should have done without all of the salty Trump side-comments that pepper the entire book. Dan never seems to miss an opportunity to take a time out from the point he's making or the story he's telling to throw in a one-liner about how Trump is garbage. I know he is, and I agree with you, Dan... but when you so consistently drop to his level it makes you seem small and petty too. Those sorts of one-line snipes fit (in moderation) with the tone of Pod Save America, but they really detracted from the book for me. I'm sure others will love it though, so who knows...

The sound editing didn't do the author any favors here. The normal narration and sound quality is good. However, there are many, many times where it seemed obvious that Dan had recorded the book's words as written, but then come in later to splice in a snarky anti-Trump comment. The audio quality for these one-sentence "zingers" is noticeably different, and then the normal audio and narration resumes. Was there someone who, after the book had already been narrated, decided that "the book is almost there, but we should really go back and splice in a few dozen pointless insults to please the base..."? Whomever that was... he or she chose poorly.

I'm glad Dan wrote this book, and I'm glad that I listened to it. I didn't really learn much of anything new though, nor feel like I got an insider's view of anything in particular. Dan perhaps suffered the bad luck in my case of following the very strong audiobooks by Alyssa Mastromonaco and David Litt. If you're reading this review, you should buy all three.

Not that I didn't think it would be a good book, but it was hilarious too! I actually had to stop the audio a few times to finish laughing so I didn't miss anything. With all things considered, it could've been a downer of a book or dull. I'm just so grateful it was far from either. I love when authors read their own stuff, because their personality (and the way the book is meant to be read) really comes through. I'm only upset that I've just now decided to order a hard copy for a family member, and wish it could've contributed to the presale "Swing Left" promotion. Great job Dan and, truly and genuinely, thank you. It was just what we needed to hear.

You made me cry!!

I love your book. Honest, vulnerable and informative. I cried at the end when you left the White House and reflected on the hopes and dreams that came true. I will not dwell on what we have now but focus on what you all accomplished. I’m so proud and hopeful for our future. We can overcome this insanity.

Full disclosure- I’m a big fan of the whole Crooked Media group of pod-lebrities, so I was predisposed to enjoying this book. I did enjoy it very much.

Pfeiffer is endearingly self-effacing, never giving himself much credit. However, it’s clear he’s a very intelligent guy. His writing brings a great sense of humor and insight that takes the book to a higher level. There’s something so likable about his delivery that by the end of the book, you just wanna hug the guy.

I loved this book and I think it’s re-listenable, which is a plus. As for anyone reading this review, you already know whether or not you’ll enjoy Yes We Still Can. If you’re a fan of the Crooked pods, you’re going to enjoy hearing Dan’s insights and perspective in long form. If you’re on the other side of the political spectrum or you’re looking for something with a both sides approach- then this book isn’t what you’re looking for.

I found the book vey boring and disjointed. The author spoke too fast and made it sound like he was reading a report as opposed to telling about his experiences. All I could imagine while listening was that I was at some boring lecture.I can't understand why someone would give it a 3 star much less a 4 star.

I think it would have been good Dan to include some of the stuff that you did that went right. I was getting a bit pissed in the middle. You tell us the bad, but what about the good you did. Obama won't have kept you around so long if you didn't do stuff that went right. This book could have been a bit more balanced. We were all so hoping the election would have turned out differently, we were drinking our own Koolaid, and we didn't see it coming. Loved the book.

I follow Dan and the crew from Crooked Media and am huge fan of how they tell a story on their podcasts so I was not disappointed. Much like on the podcasts, Dan keeps it real, doesn’t sugarcoat our current situation but somehow always leaves you smiling. Thanks for a great story of one of the best periods of my life, the Obama years. Well done!!

Inspirational and honest look at where we have been and where we are now in politics.