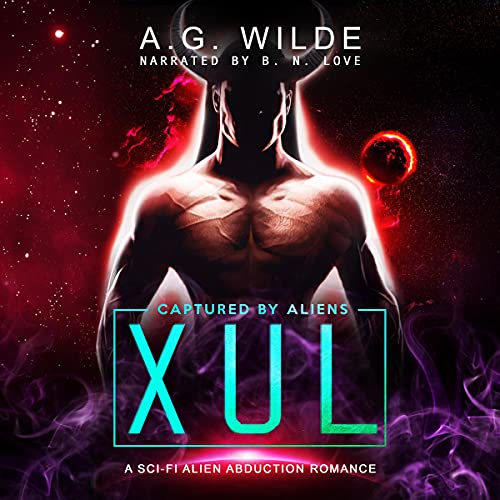 Athena wakes up in hell.

Well...it’s an alien slave ship, but it might as well be hell because she only has three choices.

Mate. Become a sex slave. Or be killed.

Desperate for freedom, a chance for survival is presented in the handsome rogue alien called Xul.

But Xul is caught up in problems of his own and a mission he cannot afford to let fail - one that could be easily compromised if he dared open his heart.

That doesn't leave her with many options and it doesn't help that she finds him utterly frustrating....

She shouldn’t really be thinking about him like that. Should she?

Xul is a stand-alone book that contains delightfully steamy scenes with a guaranteed happily-ever-after, possessive alpha males, and strong female leads. There is no forced mating between the hero and heroine and no cliffhanger. It is the first book in the Captured by Aliens sci-fi alien romance series.

I was not disappointed

This is the very first book that I have experienced from A. G. Wilde and MAN was I captivated! This book had everything: great story line, exciting action scenes, hot love scenes and well developed characters. This book was very well written an B. N. Love enhanced the book with an excellent narration. This book enticed me to read the whole series and I can not wait for the other to be added to audio.

This was surprisingly good to me. I felt like the it was a well developed story that had me not wanting to stop listening. It has a great narration to go with a great story line. This author was new to me and now I’ll be checking out the rest of this story. I got way more than I thought I was looking for.

Great science fiction world! Of course as soon as I start listening I cannot stop! Xul and Athena are an unlikely couple and loved them. They shared the same enemy and talk about the steam! Overall good story.
Narration was also well done.

I was given this free review copy audiobook at my request and have voluntarily left this review. I loved this story about Xul and Athena. They go through so much, this book has everything and sucks you in from beginning to end. Narrator B.N. Love does a great job with the story and characters. I hope the rest of the series comes to audible soon!

plot is serviceable, writing is immature

"She was certainly grateful for all he'd done for her so far-" says her inner monologue meanwhile all her interactions with him have been either sexualizing him, comparing him to a Bull (..because of his skin texture, accessories and horns?) or being intentionally obtuse about simple semantic or cultural differences. You're telling me she's familiar with Star Wars but can't grasp that "female young" means children? Strong & dumb is a fine archetype to play into...but at chapter 10/27 when he's the only sympathetic "alien" (as she keeps calling him) it starts to feel like less of a romance and more...cringey on her part. Argumentative and judgemental aren't necessarily synonymous with "strong willed".

At chapter 17 she says "You've evolved like wild animals maybe we humans spent more time developing our brains." And thats the best summary I can think of for why her diction choice and tone are so..bleh.

Bottom line; the plot is serviceable for the genre but the writing feels very immature. Half way through the book and there's still no tangible chemistry (or even...general respect?) between them. She still doesn't even know what his species is called, and hasn't cared to ask beyond "why do you have horns". To be fair to the male love interest - he isn't incredibly developed in comparison, but he at least seems to have more clear direction and motivation.

This is my first time with this author and I am really enjoying this series! So many alien abductions and strong human women. I'm excited to see how the series plays out!

I asked to receive this free review Audible book and voluntarily wrote this unbiased review. A.G. Wilde and B.N. Love are both new to me and like a galaxy far away I never know if I will like the book or not. Well, I love it. The author has written a book that will have you laughing, grieving, yelling, wanting to gag, holding your breathe, swooning, and holding on to the edge of your seat. There will also be some passionate and explosive love scenes. Athena is a fighter but is quickly subdued by these aliens. She longs to return to earth. Xul is a warrior and wonders how this frail human being is able to survive in this new environment. He is determined to rescue and protect her. There is a strong chemistry between them! If they do survive will she want to return to earth or stay with Xul?

B.N. Love amazes me with her distinctive male and female voices. One could easily think that one is listening to dual narration. She portrays the emotions and personalities of these characters in a way that brings them to life. She is a fascinating storyteller that will hold your attention throughout the story. She is such a pleasure to listen to. I highly recommend this Audible book.

Great Sci-Fi romance and start to the series

This series is now complete so don’t let that hold you back. A. G. Wilde builds a very interesting world in Xul which is book 1 in the series. I love reading sci-fi because it really takes me out of my reality if it is written well. This book did that for me. I first read the ebook and then listened to the audio. The narrator does a great job and I was lost in the story!

Fun story to listen to!

I really liked the story! originally trad the whole series on my kindle and looked forward to the audio side! it did not disappoint! the characters development was understandable and natural compared to "I saw and found my mate" sort of thing! truly enjoyed the book!

I liked the overall story, but the heroine drove me nuts. Just little things, that added up to what I saw as entitled. Like when she asked Xul why he didn’t change his mission when he knew he would be endangering her. At this point she meant nothing to him, she was lucky he cared enough to help her at all. Or when he tries to describe sand twisters or whatever he called it and she says “oh you mean tornado.” No he meant sand twister, you’re the alien here. It was little things like that that drove me crazy.