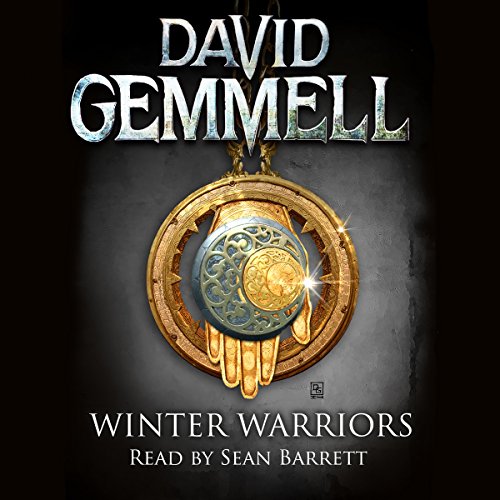 The prophecy was clear. Upon the death of three kings, the world will be plunged into chaos, and all the cast-out demons of history will return to bring blood and horror to the world. Two of the kings are dead. The third, about to be born, is hunted by the Demon Riders of the Krayakin, Lords of the Undead.

All the terrifying forces of evil range against a pregnant queen at bay in a haunted forest. But she is not alone. Three warriors stand with her, the last remnants of the once proud Drenai army. Three old men, ancient heroes, discarded by the king: Nogusta the Swordsman, Kebra the Bowman, and the hulking fighter, Bison. The fate of empires rests on their fading skills as they journey through a tormented world on a perilous quest to save the unborn king.

About 6 wks ago I found David Gemmells "Legend" The story of Drugs the Deathwalker & have burned through the Drenia series @ a pace that saddens me cause I know it's drawing to an end. Everytime Iv read/listen to one of DG's bks voiced by the outstanding Sean Barrett (a top 3 narrator in my personel pantheon on narrators) I think of Nine Fingers & for those of you that know the genre that's high praise. So staying with that thought if you love the "Bloody Nine" don't wait, start with Legend & I'll meet you @ the end of the Drenia series. Yes, it's that good!

Listening to all of his books is a trip back to my teens, when I first read them. Clean writing, set in a full, lovely world!

A master at the top of his game

Sean Barrett is the perfect voice

As rich and wonderful as I remembered…

This was the first novel by Gemmel I read. It has taken me more than thirty years to return to his world, and I’m so glad I did. It’s one of the most elegantly compelling warrior tales I’ve ever read or listened to.

Loved but I loved it when I first read it, probably not his best book but I love them all and have never been able to put one down

This is one of my favorite Gemmel book. The beginning is a bit slow but once the action starts, I love the cast of characters and how every detail is used to reach the end.

At the start, the story is aligned with the blurb : a demon prince and 3 old warriors to oppose him. What matters is the characters themselves and how they face both age and fear to confront the demon, not because they know they will win but because they have to !

These are some of the greatest books.

I feel the story in my heart and soul. He writes with all the emotion that is felt in the lifes of people.

Voice actor does an excellent job

Loved it. Voice actor does an excellent job. A little weird hearing him do women voices but it was overall good.

The worst part of the Drenai series. But still OK

All jokes repeating over and ovet. The plot doesnt make much sense either. But still enjoyable.

A wonderful story of bravery & brotherhood

Another fantastic journey through Drenai. Not all hero's wear capes & in this tale of brotherhood, betrayal & bravery they most definitely do not. The moments of humour between Bison & Nagusta remind me of the moments that helped me through in my times of service.