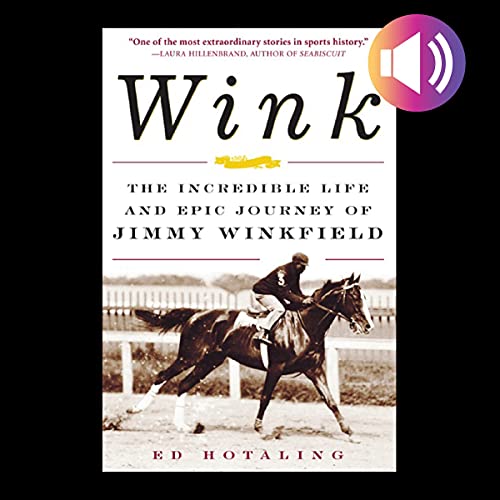 "After a number of up-the-track finishes by authors trying to emulate the success of Laura Hillenbrand's bestselling Seabiscuit: An American Legend, a worthy successor has at last broken out of the pack.... Winkfield's story is so incredible you'll find yourself wondering why you've never heard it before." (MSNBC)

"One of the most extraordinary stories in sports history is also one of its least known. Jimmy Winkfield was a gifted jockey and a remarkably intrepid man, and his life was a singular adventure. His is a story of persistence, hardship, and triumph, and it should be long remembered." (Laura Hillenbrand, author of Seabiscuit: An American Legend)

"In the entire sweep of American sports, from the days of a roistering John L. Sullivan in the 19th Century through the Tiger Woods phenomenon of the 21st, no figure made a bolder and more original odyssey of his life than Jimmy Winkfield, the poor son of former slaves whose brilliance as a jockey bore him from the winner's circle at the Kentucky Derby to the royal courts of Czarist Russia and the Austro-Hungarian Empire and from Kaiser Wilhelm's Germany to the salons of Paris. In Wink, author Ed Hotaling skilfully reports and chronicles Winkfield's battles against racism in the New World - his courage and daring in escaping that most implacable of foes - and his success and rise to glory as a rider and then a trainer in the Old World. The tale of Wink is an illuminating and inspiring read." (William Nack, author of Secretariat: The Making of a Champion and My Turf: Horses, Boxers, Blood Money and the Sporting Life)

"It is phenomenal enough that Jimmy Winkfield became a dominant force in American horse racing half a century before Jackie Robinson took the field for the Brooklyn Dodgers. But this two-time Kentucky Derby-winner's adventures after leaving to race overseas make his story all the more compelling. Ed Hotaling has a marvelous tale to tell. This is the stuff of great nonfiction." (Douglas Brinkley, author of Tour of Duty: John Kerry and the Vietnam War)

"In this fine book, Ed Hotaling adds the texture of a rich individual life to what his previous work has already told us about the great black jockeys of a century ago." (Henry Louis Gates, Jr., best-selling author, chair of the Department of African and African American Studies, and director of the W.E.B. Du Bois Institute for African and African American Research at Harvard University)

In 1904, at age 23, two-time Kentucky Derby-winner Jimmy Winkfield was forced from American horseracing by a virulent combination of racism and hard times. Wink left his beloved Kentucky, bought a steamer ticket for Europe, and made the world his racetrack.

There he embarked on a decades-long odyssey, rising to superstardom and winning and losing two fortunes. Driven at gunpoint from Russia by the Bolshevik Army and from France by Nazi occupiers, the 105-pound jockey proved himself the most resilient, courageous athlete of the 20th century. In 2005, Winkfield was inducted into America's horse racing Hall of Fame.

Winkfield achieved a human greatness that transcends the limits of sport. In Wink, Ed Hotaling tells this wonderful story - this American story - in all its rich and vibrant power.