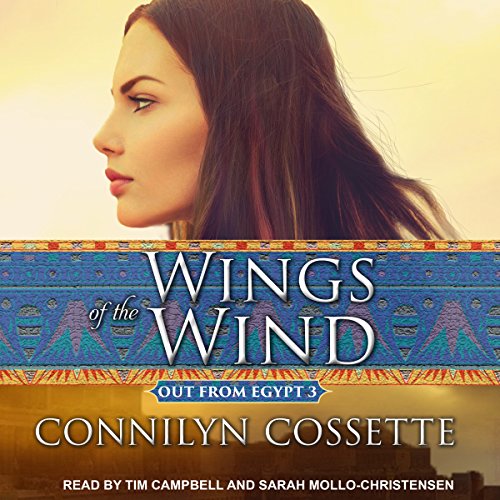 Wings of the Wind

Motherless and raised alongside her brothers, Alanah, a Canaanite, is no stranger to fighting. When her father and brothers are killed in battle with the Hebrews, she disguises herself and sneaks onto the battlefield to avenge her family. The one thing she never counted on was surviving.

Tobiah, a Hebrew warrior, has spent his share of time on the battlefield and is shocked to find an unconscious woman among the casualties. Compelled to bring her to a healer back at the Hebrew camp, he's unprepared for the consequences of what he intended as an act of compassion.

In order to survive, Alanah must unite with her enemy. But will a terrible revelation drive her toward an even greater danger?

Beautiful conclusion to the Out from Egypt trilogy

What a beautiful conclusion to Cossette's Out from Egypt trilogy! With some obvious Mulan-like aspects at the start, I loved this story of forgiveness and redemption. The Bible doesn't give us many details of the Israelites' 40 years in the wilderness, but I feel like Cossette does a good job of fleshing out some probable scenarios. If anything, reading this trilogy has inspired me to dive back into God's Word to re-read these stories of His faithfulness toward His chosen people.

This is an excellent book to end an incredible series. Alanah's story is much different from the other 2 books. It is exciting, from start to finish. Another 10-star book! We highly recommend this series and this author!

The best of her books!

I have read most of her books but this one is my favorite! Just the right mix of romance and adventure.

I'm so thankful for the way this was written and helped me see the possibilities of how God moves in our lives. he has done the same for me. Thank you.

I have thoroughly enjoyed every book that I have read by Connolly’s Cossette! Wings of the Wind was excellent just like her other books. I love the way it brings the Old Testament to life during this time period and the was the characters continue and interact through her other books. Thank you for a fabulous read.

Great story line,kept my interest. Lots of names thruout.Wish two previous books would have had epilogues.

This was an incredible series to get into. Especially if you know about the history involved outside of the scriptures. The characters are amazing and their journeys, as foreign in many aspects are relatable in the ways the matter most. Strongly reccomend this for all listeners whether they believe in the scriptures or not, these are very entertaining.

While the story line is pretty predictable, I found Wings of the Wind an enjoyable escape. I’m interested in listening to more in this series.

Must read series! I enjoyed all the 3 books!!

The "Out of Egypt" series is a wonderful story to listen to.. I highly recommend these books and look forward to more of Connie's books..