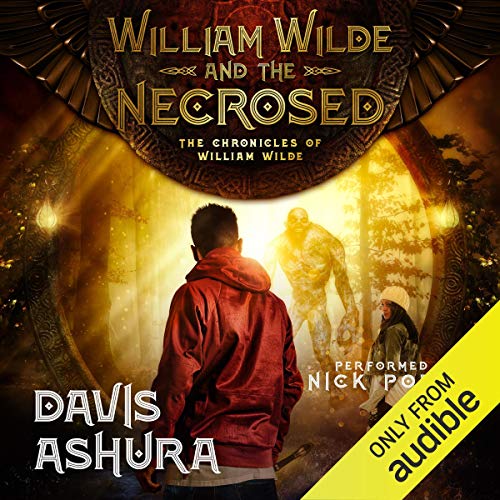 William Wilde and the Necrosed

William Wilde and the Necrosed

A riveting tale of magic, mystery, and adventure, The Chronicles of William Wilde will thrill listeners who loved The Summoner Trilogy and The Maze Runner.

On a cold winter's night, just shy of his 17th birthday, William Wilde became an orphan. It was a simple car accident that claimed the lives of his family.

Eight months later, at the start of his senior year of high school, a beautiful, mysterious girl enters William's life. Captivating and confident, she holds secrets about William's heritage, secrets of which he himself is unaware: rare magic flows in William's veins.

And watching William from afar is Kohl Obsidian, a monstrous, undead horror. He won't rest until the tragedy he started eight months ago culminates with William's death.

William's life hangs in the balance, and he must discover a means to vanquish a creature that has never been defeated.

Enter a mystical world where heroes are forged from the unlikeliest of metals.

Great story, lots of fun
Nick is a fantastic narrator, he's a good reason to listen to any book.

This is a fun book set in the 80s (my favorite time period). It is YA-but I like YA. I thought the characters were well developed, the storyline was fast paced, and the narrator was excellent. Can't wait for the next book in the series!

This is a good story meant for teenagers to read. If your an older listener keep that in mind when you start to listen to it. Overall a good story with excellent narration from Nick. As always the narration elevates the story to more than it is but for a basic teenage magic story, it’s worth listening too.

The magic of STRANGER THINGS and THE MAZE RUNNER

William Wilde and the Necrosed by Davis Ashura, narrated by the sublime Nock Podehl, is a tremendously well-written and exciting story. Nick's performance confirms that he, once again, deserves the credit given him as one of the top narrators in fantasy today.

Fans of Rick Riordan, Suzanne Collins, James Dashner, and Brandon Mull will find a new home with The Chronicles of William Wilde. Those who loved Indiana Jones, the Goonies, and E.T. as kids will also get lost in this Urban Fantasy.

This story is magical. Both literally and figuratively. Ashura has managed to unfold an adventure to us that bridges the generational appeal, promising to delight middle-aged audiences all the way down to high school audiences, much the same way that STRANGER THINGS has done. As a 40-year-old, I found myself living in a nostalgic time through the story, with all the 80's references, while not being able to take the ear buds out as the plot sped along. The magic system is just being introduced, and we get to learn with the characters. For a while, I wasn't sure who was on whose side. With a fair amount of twists and discovery, hints of teenage love, and plenty of adventure, William Wilde and the Necrosed promises a rollercoaster of thrills to a wide audience. The characters feel like old friends from a long time ago . . . and some are, if you know Ashura's other works. You will not be disappointed.

I know that the death of your family is a fantasy trope, but grief has a way of transforming a person especially in their formative teenage years. The MC starts high school like nothing has changed.

The upbeat tone of the main character immediately creates a cognitive dissonance that makes it hard for me to emerge myself in the story. It’s been eight months!

At first, I admit, it wasn't that great especially after finishing The Casts and the Outcasts series! 😍 But, it got SOOO much better! also, AIYA THE KITTEN!! IS THAT PERHAPS AIYA THE KESSARIAN?!? AHHH SOO GRATE!!!

As i come to expect with Davis he keeps you interested in the story. He doesn't slow it down when developing characters like some author which can drag a littlw. The characters developed in action which in my opinion is so much more enjoyable. i look forward to the next books.

Nick Podehl is the perfect narrator for this young adult magical adventure that transports us back to the 80s! I can't wait to get my hands on the rest of the series!

I liked this a lot more then I was expecting to! some parts had me surprised how interested I am. can't wait to check out the rest of the series

William vs the dead

William Wilde starts similar to many of the young adult series. William finds out that magic is real and he has a talent for it. He and his high school friends are out on a trip when the dead attack. The creature is described as an undead terminator. William and his friends need to find a way to escape this monster, let alone defeat it.

The book is set in 1986, so it limits the recent technology advantages. There are also nice hints of nostalgia. It is written with a duel perspective, so it is very interesting to see the events from William’s friend.

Nick Podehl does an amazing job of narrating.