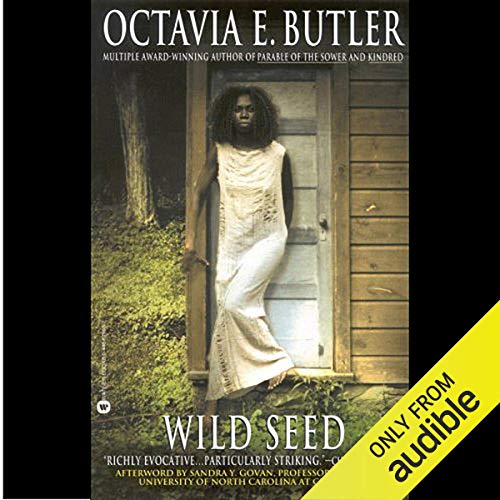 When you first meet Doro, you'd think he was an ordinary man, the same as you or I. But Doro has a unique gift: he can survive the death of his body by transferring his essence into the body of another. Unfortunately for those he takes over, there's only room for one consciousness in the human brain, and so when Doro takes control, the previous owner is evicted. He's survived this way for thousands of years, hopping from body to body, and leaving a trail of the dead in his wake, for his gift does not allow him to inhabit bodies for long, necessitating the frequent claiming of new victims.

Wild Seed begins in 1690 in Africa, when Doro discovers another immortal by the name of Anyanwu, though Anyanwu is not the monster Doro is. While his powers are tied inextricably to death, Anyanwu's are tied to life; instead of stealing new bodies, she is able to manipulate her body to heal any wound, make herself appear forever young, or even shapechange into different creatures altogether. When Doro first meets Anyanwu, she appears to be an old woman serving as shaman to the village. But when he discovers her true nature, he embarks upon a quest to find others like her — "wild seed" — and selectively breeds them in order to foster the development of these seemingly magical talents. This multigenerational genetic engineering project takes the pair from their starting place in Africa in to the American colonies and beyond.

To describe the plot as above surely doesn't do justice to Wild Seed, which is easily one of the finest science fiction novels ever written; but more than that, it is a great work of literature, period, that explores deep philosophical issues and vividly explores the extraordinary long lives of two fascinatingly-drawn characters.

For a book as brilliant as this, it would be easy for a narrator to just convey the text and get out of its way, but Dion Graham somehow manages to add yet another layer to an already rich and complex narrative by giving voice to it with such emotion and gravitas. Graham provides a variety of character voices to the extent that he seems to be a vocal chameleon; the character of Doro alone requires him to change his voice into a number of different accents, all of which Graham ably handles. But perhaps what makes this performance truly stand out is the intensity of Graham's narration in between dialogue, which really drives home the power of Butler's prose.

As both a novel and an audiobook, Wild Seed stands as a sterling example of science fiction, literature, and performance art. Utterly compelling, and completely unforgettable. — John Joseph Adams

Doro is an entity who changes bodies like clothes, killing his hosts by reflexor design. He fears no one...until he meets Anyanwu. Anyanwu is a shapeshifter who can absorb bullets and heal with a kiss and savage anyone who threatens her. Together they weave a pattern of destiny unimaginable to mortals.
©2001 Octavia E. Butler (P)2009 Audible, Inc.

The most terrible villain I've ever read about.

What did you love best about Wild Seed?

The villain is so powerful, single-minded and so apathetic, without being at all campy or forced. He only had one main superpower and it wasn't blowing stuff up or moving objects, but it made him so frightening. This was the most creative story I've read in a long time.

What other book might you compare Wild Seed to and why?

I'ts not like anything I've read before, but I have to choose . . . For the protagonist, it most reminds me of Roots because mucn of the story takes place during the time of slavery, and the protagonist is enslaved, despite being so very powerful. For the antagonist, I think of the Exorcist because the villian is so evil.

What does Dion Graham bring to the story that you wouldn’t experience if you just read the book?

This is the advantage of the audiobook. The narrator does his job so well, that each character is more than just an image in your imagination. They are a presence. In particular the antagonist of this story was a special challenge because he required different voices from time to time and there were several accents.

No. I did not laugh or cry but I felt very proud and connected. This is a sci-fi story by an African-American woman in which the main two characters are African. True, one of them is pretty messed up, but hey. He's the bad guy. It's the first book of that kind that I've come across.

I really loved this book. Octavia Butler is now one of my favorite writers.

Fairy Tale... even if it's not

There's a little smack of oddness to it i can't put my finger on, and i was afraid the accent would kill me - but no. it was nice. And original. which you don't get much these days. Reminded me a little bit of Niel Gaimon's Anansi boys only much darker and a different point of view. Again, not one of my all time best hits, but a good solid creative story with a little something for everyone. And that ain't bad.

The concept of this book is quite interesting. Two seemingly immortal people have very different perspectives on what they should do with their powers. One is a healer while the other is a killer. One sees people as only possessions to be used while the other sees all people as deserving to be free.
This book seemed at times to move very slowly, which made it difficult to get through. That said, the characters and the concept of the story kept me coming back to it. I do plan to read the next book in the series.
The narrator did a great job. Switching between male and female and between northern and southern accents was seamless.

An emotional journey through time to love.

This was my first book by Mrs. Butler and it took me on a fantastic journey into a possible world of the past full of wonder, pain, learning and purpose. It reminds me that despite what we think are unwinnable odds, we can still rely on our humanity to guide us. She developed good character arcs while letting us have anticipation before she divulged bits we'ed been waiting to hear. A talented and deep author. Good read!

Wild Seed is now the fourth book and the start of the second series I have read by Octavia Butler. She is a good writer and creates interesting (and wildly different) settings and characters.

But Butler is also hard to read at times. Not particularly unusually among fantasy and science fiction authors, she uses her settings to create alternative social structures and explore issues of ethics and morality.

Butler is known for her feminist writing. While not all men are evil, all of the books I have read from her so far have explored the ideas of male oppression of women.

Wild Seed is about two long lived people. Doro has the power to move from one body to another, living forever, but needing to ‘feed’ on those around him both to stay alive and because of an innate need. Because of his long life (he has been alive for over 4000 years), he has created breeding programs to breed special powers into his ‘children’. These settlements, first in Africa and then later in the Americas, are scattered, but allow him to live as a God. Worshiped by his children, who will willingly give up their bodies for their God.

Doro meets Anyanwu in the mid 17th century in Africa. She is already several centuries old. She has the ability to change herself and heal her body and to some extent heal others. When Doro finds her, she has already outlived 10 husbands and has dozens of children. After spending time with Doro she in her own way also creates a community around her. But one that where she can protect and heal those that need her.

When Doro finds her, he does not realize the extent of her powers, but tries to draw her into his plans. He uses her love of her children and all people to try to force her to do his bidding.

Set over several hundred years, Doro and Anyanwu are lovers, friends, enemies and opponents. He is cruel, living a life that is only about himself. She is kind (although not perfect) and tries whenever possible to bring about healing and wholeness. He becomes a less cartoonish villain toward the end, but if there is a weakness it is in the characterization of Doro as villain.

This was a hard book to really enjoy. Butler can write and she creates compelling rich characters. But it took me quite a while to make my way the whole way through it because it can be so heavy. Heavy subjects are important, but also need to be balanced with lighter subjects. So I need to wait a few weeks before reading another Butler book.

I should note a content warning on this book. Because a significant theme is the breeding of humans, there is a lot of sex in the book. Most of it is off screen, and it all consensual (of a sort), but it is also treated with far less important than what Christian theology treats sex.

I listened to this book over 2 days so it did captivate me but it was an unusual and sometimes weird tale. A love story of competing minds both seeking control of themselves and each other. Fantasy and magic combined with very human emotion. I did enjoy it but I don’t know if I would have read it if I knew the strangeness of it before hand. Recommend it? It is worth listening to and disturbing at the same time.

great voicework. a love story between two immortals, a shapeshifter and telepath. but its so much more. they go from wanting to murder each other to lust, to love, to madness.

If you could sum up Wild Seed in three words, what would they be?

Anyanwu and Doro. Both characters are fascinating; Doro with his cold approach with maintaining his bloodline and Anyanwu's desire to keep her "family" safe from the regular world (and Doro's hands). Although their special abilities and their approach towards building their nation are different, they are alike.

What other book might you compare Wild Seed to and why?

Not that I know of but I did enjoy his performance with this book.

Moved isn't the right word for the moment, but I did savor in the moment when Anyanwu discovered dolphins. This moment and her return to the sea allowed me to relish the thought of being able to go anywhere (or be anything) at a moments notice.

The narration & story made me want more. I really didn't want it to end. I felt connected to the main characters and felt totally emerged into their world!!

What a story! She wrote the stuff great movies are made of. This is the first book that helps you understand what type of subject matter her future books would be about.