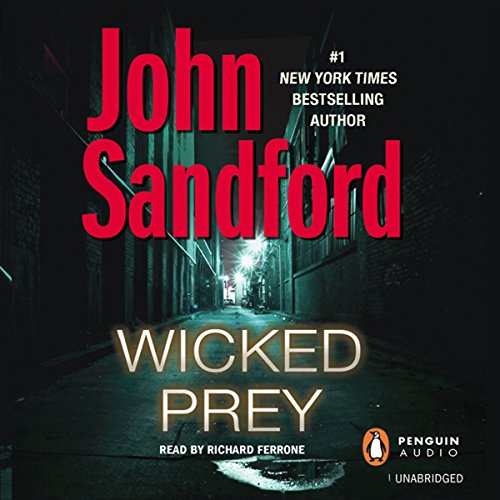 Danger stalks Lucas Davenport at work and all too close to home, in the superlative new thriller by the number-one New York Times best-selling author. For 20 years, John Sandford's novels have been beloved for their "ingenious plots, vivid characters, crisp dialogue and endless surprises" ( The Washington Post), and nowhere are those more in evidence than in the sudden twists and shocks of Wicked Prey.

The Republicans are coming to St. Paul for their convention. Throwing a big party is supposed to be fun, but crashing the party are a few hard cases the police would rather have stayed away. Chief among them is a crew of professional stick-up men who've spotted several lucrative opportunities, ranging from political moneymen with briefcases full of cash to that armored-car warehouse with the weakness in its security system.

All that is headache enough for Lucas Davenport - but what's about to hit him is even worse. A while back, a stray bullet put a pimp and petty thief named Randy Whitcomb in a wheelchair, and ever since, the man has been nursing his grudge into a full head of psychotic steam. He blames Davenport for the bullet, but it's no fun just shooting him. That wouldn't be painful enough. Not when Davenport has a pretty 14-year-old adopted daughter that Whitcomb can target instead.

And then there's the young man with the .50 caliber sniper rifle and the right-wing-crazy background, roaming through a city filled with the most powerful politicians on earth....

Another winner for Davenport fans

I have listened to many of the Davenport novels from Audible as well as Sandford's companion Flowers series. From reading prior reviews I expected to be a satisfied Sandford returning customer and I was not disappointed. This story moves along quickly and is not difficult to stay with as long as you don't try to remember all the details of each character (of which there are many, as other reviewers have pointed out). There are two weaknesses that I saw here, which I agree on with other negative reviewers. There is a lot of profanity and violence; for sure this is characteristic of the Davenport/Flowers novels and if you don't like that then you won't like this book. Second, and more importantly, the plot is a little thin ... this book is tied in very closely with the last Davenport and Flowers novels in the series and it almost feels like Sandford was trying to crank out as much as possible in as short a time as he could. I would have liked to seen a little more intricacy in the plot line. That said, though, I liked the book and would recommend it and purchase it again.
No review of this book or the other Prey novels would be complete without mention of Richard Ferrone's narration. Ferrone's voice is perfect for these stories. He can portray the bad guys really eerily and gets the tough good guys nailed. His voice sounds like he's been gargling with gunpowder and it's perfect for these books. With this novel I found that I was looking forward to more Richard Ferrone as much as I was to more John Sandford and Lucas Davenport.
Overall a great combination. In spite of some weaknesses, five stars.

Two distinct subplots with little connection between them. One was excellent, the other was OK. Probably neither was enough for a complete novel, so ...
But, I always enjoy Sandford's books, especially the Prey series. I 'prey' that he'll write more of them.

The story and narration are great! However, someone bungled up the recording. The Second half of the book is first and the first half is second. Audible please fix this!

I really think Sandford is getting bored with Davenport. This novel tries to tell several stories and in the end succeeds by the skin of its teeth.

The characters are still well drawn...but overall, a disappointing entry from an author who can do much better.

I would have preferred one major story line in this novel and I think the presence of two detracted from the listen. Sandford linked them in an implausible way and that made it even worse. The other weakness in the book was the way Davenport's 14-year-old daughter was portrayed. At every turn she seemed to have a television field crew at her beck and call. And all this during the Republican National Convention. C'mon! Negatives aside, Sandford did his usual good job of creating evil characters who possessed a few redeeming social values such as sadness expressed for fallen comrades. The book's ending might leave something to be desired for listeners who prefer to see a total victory for justice and the complete tying up of loose ends. Ferrone is excellent as a reader and adds to the overall product. A good listen for Davenport fans.

I expected better from this book. Overall, I found it hard to get through. Too much detail in the wrong places that lead nowhere. You had to listen to all kinds of, frankly, boring detail to get to the action. The opportunities where the plot could get interesting or lead down a path which would make it good were missed. The ending was not exciting but more of a relief. I think that this author has potential, but this was clearly not one of his better efforts.

As usual Sandford and narrator Ferrone don't disappoint. Another 5 star book in the "Prey" series!

Last week, I listened to "Stolen Prey" and really enjoyed it. I was looking forward to this new one, "Wicked Prey." I really liked the reader. The plot was OK, too. But, my objection to the book is having to listen to so much trash/profane language of the bad guys. I'm no prude, but listening to street gang jargon, bad language and swearing is not my cup of tea. If I were reading the book, I would just skim over those parts to get the gist of it, and move on. But, listening to pages and pages of punk talk turned me off. I finished it, and look forward to Lucas Davenport's next adventure, but I hope that his criminals get out of the gutter.

I had to restart the 1st hr. Trying to keep track of the charaters and the plotline is challenging when EVERY charater sounds exactly the same. Very frustrating, I eventually quit trying. I did purchase at the discounted rate and I still wish I could get my $$$ back. Don't bother.

A bit explicit, but I enjoyed this story

If your not offended by explicit language, this is a very enjoyable story. Worth the money.