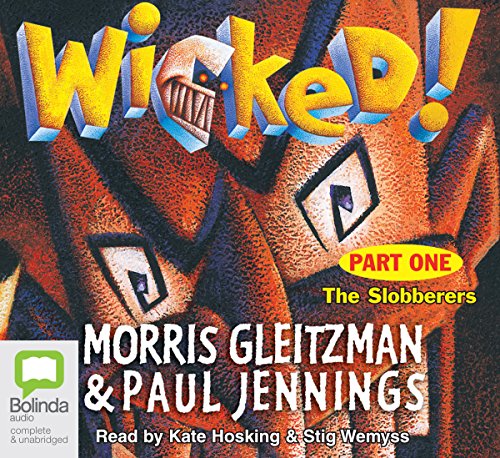 The Slobberers is the first book in Wicked!, the engrossing (and gross!) six-part novel collection by famed Australian children's authors Morris Gleitzman and Paul Jennings. In this raucous and fantastic audiobook aimed at kids in grades four through six, listeners meet Dawn and Rory, step-siblings who hate each other's guts but who are forced to become allies in order to defeat the dreaded Slobberers.

Australian comedic actors Kate Hosking and Stig Wemyss each give exuberant performances of the chapters as they alternate between Dawn's and Rory's points of view. Their voices are dramatic and adrenalized, reacting realistically to every weird, creepy, and fascinating development in this zany story.

On the other side of the fence horrible, gobbling squeals came from THE SLOBBERERS as they fought over the bloody trail I had left behind.

"Aaagh." I tore my hand away and fled.

It's WICKED! It'll suck you in.

"In this wildly inventive, highly original series the children must think things through and save themselves and their loved ones. The series is performed with great energy by Kate Hosking and Stig Wemyss. American middle school readers will enjoy these zany and terrifying adventures." ( AudioFile)