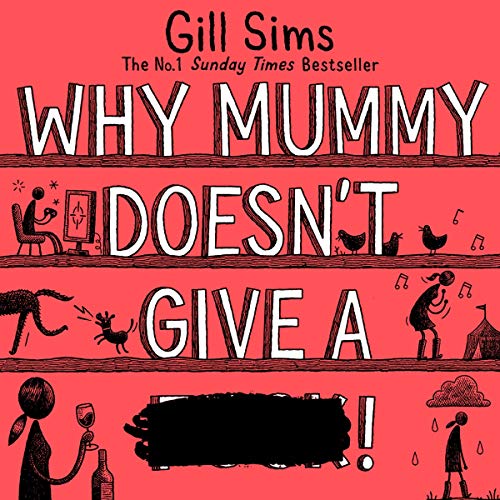 Family begins with a capital eff.

'I’m wondering how many more f*cking "phases" I have to endure before my children become civilised and functioning members of society? It seems like people have been telling me "it’s just a phase!" for the last 15 bloody years. Not sleeping through the night is "just a phase". Potty training and the associated accidents "is just a phase". The tantrums of the terrible twos are "just a phase". The picky eating, the back chat, the obsessions. The toddler refusals to nap, the teenage inability to leave their beds before 1 p.m. without a rocket being put up their arse. The endless singing of Frozen songs, the dabbing, the weeks where apparently making them wear pants was akin to child torture. All "just phases"! When do the "phases" end, though? When?'

Mummy dreams of a quirky rural cottage with roses around the door and chatty chickens in the garden. Life, as ever, is not going quite as she planned. Paxo, Oxo and Bisto turn out to be highly rambunctious rather than merely chatty, and the roses have jaggy thorns. Her precious moppets are now giant teenagers, and instead of wittering at her about who would win in a fight - a dragon badger or a ninja horse - they are Snapchatting the night away, stropping around the tiny cottage and communicating mainly in grunts - except when they are demanding Ellen provides taxi services in the small hours. And there is never, but never, any milk in the house. At least the one thing they can all agree on is that rescued Barry the Wolfdog may indeed be The Ugliest Dog in the World, but he is also the loveliest.

“Honest and very funny - it’s a tale that mums will identify with.” (The Sun)

“Sims’s latest offering is a hilarious follow-up to her best-selling debut...you’d be forgiven for thinking the blogger behind Peter and Jane couldn’t pull it off twice - but she has.” (The Sunday Post)

loved it as always and appreciated the more serious bits as well. recommended if you are looking for a bit of relatable fun!

Not At All As Entertaining As Her First Book

Gill Sims has jumped the shark with this book. It bears very little resemblance to Why Mummy Drinks. While that novel - her first - was really uproariously clever, funny, and populated by a variety of entertaining characters ... this one is simply one long, tedious bundle of complaints and negativity. Yes, there are laugh out loud moments that remind the reader of how hilarious Sims can be - but these are few and far between.

None of the characters are likable, and the daughter is particularly odious. Yet Sims justifies every obnoxious behavior as "typical teen" ... and spends far too much time rambling on and on as to why this behavior is to be expected. Underaged drinking, foul attitude, condescension ... it's all OK because, after all, teens are simply trying to sort out their lives. In one bizarre episode, she actually supplies her daughter and friends with multiple rounds of hard cider. Sims makes several off-putting and detailed allusions to the 13-yr-old son's masturbatory sessions. Please. No. Why?!

Finally, the behavior of the protagonist herself is absurd and off-putting.

The entire book is one scene after another of unlikable characters interacting unpleasantly, interspersed with the afore-mentioned rambles on reprehensible teen behavior that she considers age-appropriate.

Sims needs to stop here. This trilogy has overstayed its welcome.

I absolutely love this book! ❣️🍷The author is a wonderful breath of fresh air, she has an amazing way of putting life into perspective all the while telling it like it actually is , the ups n downs , parenting, marriage,
divorce, it’s all right here within these pages, without a care she lays it all out there , and I do believe in a manner in which most women can relate, I most certainly can!! I will be purchasing her other books , as I was quite sad when this one ended , I can’t get enough of her wit, her style of writing, along with the narrator this book is definitely worth more than 5 stars 🌟 🌟🌟🌟🌟🌟
As a side note if one is put off by the use of swear words then this book is not one you’d enjoy.

Not as good as the first

Well written and performed but just gets a bit too “woe is me” by the main character at times. Worth a listen

I've never reviewed a book before, but....

I absolutely loved this story!! At one part, I laughed so hard, I shot tea out of my nose. I even cried once. This is my new favorite book!