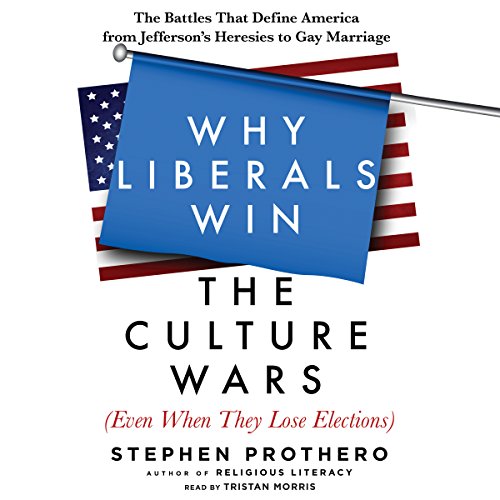 Why Liberals Win the Culture Wars (Even When They Lose Elections)

In this timely, carefully reasoned social history of the United States, the New York Times best-selling author of Religious Literacy and God Is Not One places today's heated culture wars within the context of a centuries-long struggle of right versus left and religious versus secular to reveal how, ultimately, liberals always win.

Though they may seem to be dividing the country irreparably, today's heated cultural and political battles between right and left, progressives and the Tea Party, religious and secular are far from unprecedented. In this engaging and important work, Stephen Prothero reframes the current debate, viewing it as the latest in a number of flashpoints that have shaped our national identity. Prothero takes us on a lively tour through time, bringing into focus the election of 1800, which pitted Calvinists and Federalists against Jeffersonians and "infidels"; the Protestants' campaign against Catholics in the mid-19th century; the anti-Mormon crusade of the Victorian era; the fundamentalist-modernist debates of the 1920s; the culture wars of the 1980s and 1990s; and the current crusade against Islam.

As Prothero makes clear, our culture wars have always been religious wars, progressing through the same stages of conservative reaction to liberal victories that eventually benefit all Americans. Drawing on his impressive depth of knowledge and detailed research, he explains how competing religious beliefs have continually molded our political, economic, and sociological discourse and reveals how the conflicts that separate us today, like those that came before, are actually the byproducts of our struggle to come to terms with inclusiveness and ideals of "Americanness". To explore these battles, he reminds us, is to look into the soul of America - and perhaps find essential answers to the questions that beset us.

This is a terrific and well-studied reminder that America has been arguing with itself since its birth. I felt like the case studies were a little draggy in parts, but when he got to the conclusion, I finally recognized why he had drummed some points home so hard. (The conclusions blew my mind.)

It has helped me have a deeper understanding of the nature of our country's politics, and of the individuals waging the culture wars.

The narrator speaks very clearly and very slowly. I enjoyed his performance much better once I realized I could speed him up.

This book is well written. Easy to listen to and follow the point of view. History always seems to reveal our human tendency to hold on to what we think we're losing when we could have something better if we let go of nostalgia. I continue to pray that we will be more civilized in our culture wars.