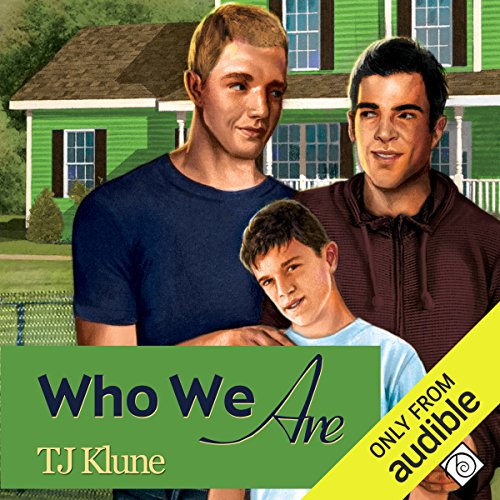 Bear, Otter, and the Kid survived last summer with their hearts and souls intact. They've moved into the Green Monstrosity, and Bear is finally able to admit his love for the man who saved him from himself.

But that's not the end of their story. How could it be?

The boys find that life doesn't stop just because they got their happily ever after. There's still the custody battle for the Kid. The return of Otter's parents. A first trip to a gay bar. The Kid goes to therapy, and Mrs. Paquinn decides that Bigfoot is real. Anna and Creed do... well, whatever it is Anna and Creed do. There are newfound jealousies, the return of old enemies, bad poetry, and misanthropic seagulls. And through it all, Bear struggles to understand his mother's abandonment of him and his brother, only to delve deeper into their shared past. What he finds there will alter their lives forever and help him realize what it'll take to become who they're supposed to be.

Ce que les auditeurs disent de Who We Are

Yes. Please re-record with Michael Lesley as the narrator. This narrator had issues. He did an AMAZING job (IMO) on TJ's other books like "The Lightning-Struck Heart" and "Tell Me It's Real."

The narrator mispronounced or completely misread a number of "big" words the kid and others used. It drove me nuts as I shouted out loud the correct pronunciation or the correct word. "Egregious." "Stead" is not pronounced like a horse ("steed"). Etc.

Could you see Who We Are being made into a movie or a TV series? Who should the stars be?

Yes, I would actually love to see the whole series of 3 books (1 more promised) be made into a short streaming series on Netflix or Amazon. Seriously. Casting would be key though, and the internal monologues might be tough to pull off if not handled correctly.

Charlie David should just shut up, he's awful and after having Sean Crisden in the first book, this was a big disappointment.

why is bear stupid and thoroughly neurotic for no reason? why is the kid a jerk now what happened to him being sweet and smart. why does Miss Paquin British? was this book written by somebody else and why did they change the narrator who dies none of the voices correct

If you loved the first, you will love the second

If you could sum up Who We Are in three words, what would they be?

There are a lot of things that happened in this book and so I would insist that if you read, Bear Otter and the Kid, you definitely need to read this one.

Why oh WHY do they change narrators in a series?

Yes, but really not a fan of the narrator. One of my favorite series. Love the balance between angst and humor. Especially the seagull chapter.

Otter. I love his protectiveness, his complete happiness with his relationship.

Made a 9 year old boy sound like a flaming queen. Just ick.

Was Who We Are worth the listening time?

Mostly. But I definitely going to reconsider buying a series where the narrators have changed.

Great, but just not as good as Bear, Otter and the

A good continuation of lives of Bear, Otter and the Kid. The author does an admirable job of squeezing another instalment from a storyline that wrapped up pretty nicely in the first book.

Not as good as the first book, but a really great end to a cute little love story.

After loving the first book, this one is virtually unlistenable. The gentleman reading should have listened to book one. I know the characters can't sound exactly alike but they're totally different. It's supposed to be only a few months after the first book but the kid sounds like he's now 17. Otter is now effeminate. And I can't listen past chapter 3.

The beauty of these characters is in their imperfection.

Humor, lots of emotions, a great cast of characters, I enjoyed the narration...recommended!

Narrator! Where is Sean Crisden?!!!! He was awesome with the first book. In this book, Ty as a "9 1/4" year old suddenly sounds Gay, where previously he did not, has a potty mouth and in the few months between BOATK has gotten way out of hand for his age. In BOATK he was sweet, precocious and extremely smart and he tore at my heart strings. In this book he is just a little too advanced too quickly. Also Bear was really ridiculous, he started out as a shy diminutive steady, loving totally unselfish guy and turned into a potty mouth, acting more affected and down right girlish sometimes in this book - more so than Otter (who has been gay for a while). I liked the first book because I appreciate the normalcy (to me) of Bear, Otter and the Kid, despite their tribulations. I think most reactions and choices were within the realm of possibility and they were just really good loving people. While they remain good and overall loving, so many choices and actions (and speaking style and content) were over the top and somewhat flamboyant, hard to believe for our shy Bear really, regardless of drinking - and in some cases not drinking .

What other book might you compare Who We Are to and why?

I am comparing this to Bear, Otter and the Kid (which was excellent and very well narrated!). I have heard Charlie David before - but he wasn't suited for this one.

I didn't like it, it was way out there for most of these returning characters except for Bear and Otter. The Narrator matters, the narrator is huge!

If it were written with a little restraint, more like the first one. This plot and the characters are all over the place. I realize there are growing pains to be had, both for a 9 year old and a "newly discovered" gay Bear, but this was extreme

Mrs. Paquin was ruined for me as well in this book, I understand eccentricity but this was off the charts. I did buy the Art of Breathing (third installment) because it is again narrated by Sean Crisden who made Bear, Otter and the Kid so precious to me - and TJ Klune's excellent writing in that installment. (I'm hoping the third time's the charm!)

Would you listen to Who We Are again? Why?

I think I prefer the first book, but it was simply for narrative reasons. TJ Klune is a fantastic writer. However, I'm not a fan of Charlie David's narration. Pretentious pronunciation and a rather annoyingly terriblly awful and unnatural British accent for a character who wasn't previously British.

What other book might you compare Who We Are to and why?

There's really nothing to compare it to, besides its predecessor. The main character's narration is wonderfully verbal and neurotic. Its so deliciously funny!

Who would you have cast as narrator instead of Charlie David?

The previous narrator for Bear, Otter and The Kid. He did a fantastic job.

It's very long, which makes it rather impossible. But, if I could, I would have eaten it up in one sitting.

I really really liked Bear, Otter and the Kid and this is the sequel...which I ABSOLUTELY LOVE AND ADORE!! It's better than the first book. I laughed, cried and blushed. Bear is hilarious to follow in his thoughts and one of my best moments was when he really blurted out everything and kid looks at him and comments that this must be the way Bear is thinking. Just saying...you need to read.

Charlie David is a great choice for it.