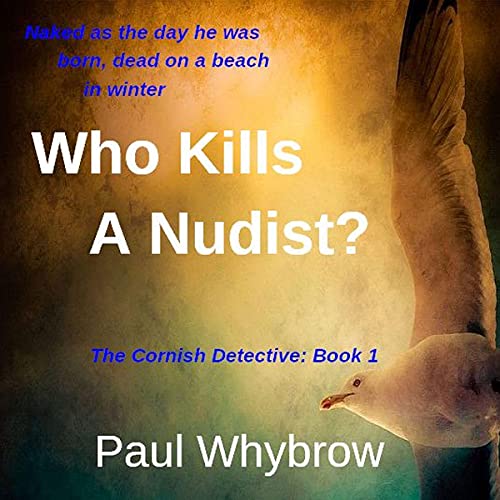 Who Kills a Nudist?

A pensioner is found drowned on a beach used by naturists. An autopsy shows his death was violent, that he'd been sexually molested.

Detective Chief Inspector Neil Kettle is a grieving widower of three years. The last time he visited this beach was with his wife. Already running investigations into human trafficking and the smuggling of drugs and weapons, Neil's enquiries into the victim's life reveal links to a shady millionaire car dealer, Rupert Mansard, a man who's risen from nowhere to prosperity.

Desperate immigrants are snuck into the country, forced to work as slaves to pay off their debt. Cornwall's rugged coast land with sheltered coves, quiet rivers, and inadequate customs patrols has favored smugglers for centuries, and only the contraband has changed.

The drowned man was found by an American photographer called Mish Stewart, who lives in a remote cabin overlooking the beach. Someone is stalking her, a shadowy man who could be their suspect Rupert Mansard. She's separated and though Neil is still grieving, they get on well enough for him to imagine falling in love again one day.

Huge profits are guarded with malevolence, destroying the innocent and the corrupt. Neil Kettle is pursuing men with assault rifles, who treat human life as a disposable commodity. Anyone and anything can be bought and sold. Mish, the only woman he's cared about for ye,ars is under threat.

The car dealer isn't intimidated by police interest in him, insulated by his wealth and insider knowledge about their investigation — someone is a traitor.

Then, a bullet is fired through Neil's kitchen window.

Is he about to become a target?

The narrator’s lisp, heavy accent and worst of all his failure to recognize his own punctuation marks! He just ran all the lines together making it so difficult to know where he was in the story. Seriously, leave the narration to the experts, because your writing is really good and the story-line well researched.