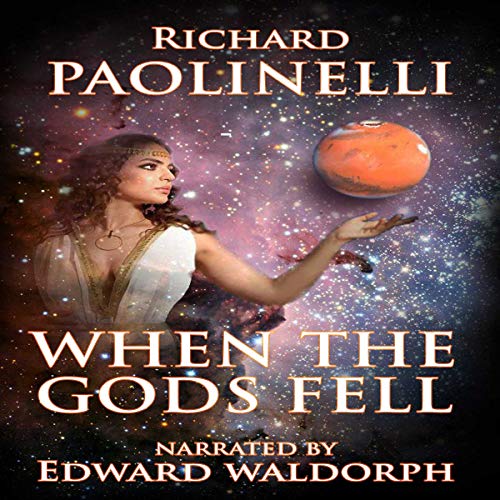 When the Gods Fell

In the year 2041 mankind has finally stepped onto the surface of Mars. The crew of the Seeker set about their mission of laying down the foundation for a new base while two of the crew are sent out to recover old Earth probes.

But instead of probes, the pair discover a mysterious woman who calls herself Oracle Delphi, and she has an incredible tale to tell them. A tale of a Mars over 65 million years in the past. Of a world that was once covered in seas and lakes, icecaps and deserts, plains and forests. When it was a world called Olympus, inhabited by the race of advanced immortals that called the planet home.

Back then, all were led by Lord Zeus, head of the ruling family of Caste Olympus. But other Castes chafe under the Olympian rule. Lord Odin, of Caste Norse, and Lord Anu, of Caste Paga, have set their eyes upon the throne of Olympus. Even as the jubilee celebration of Zeus’ rule draws near, Odin and Anu recruit the leaders of the other Castes - Dine, Asiac, Afrikans, and Hindi - to their cause against the mighty Zeus.

Only Caste Zion, led by Lord Yahweh, remains loyal to the throne. A loyalty proven two centuries before when Yahweh exiled his own son, Lucifer, after a failed coup attempt. But Lucifer’s treachery will not die. He waits for the rebellious Castes to strike against his father and set him free from his prison on Gaia, the third planet in Olympus’ solar system.

As the plotters move against the throne, Zeus sees the extinction of all life on Olympus as the only possible result of the looming civil war. He is left with only one terrible solution. Zeus turns to the only person he can trust to carry out his last order as ruler of Olympus.

What impact will Zeus' final order have on the future of Olympus? And what can be learned of the long-ago origins of life on Earth?