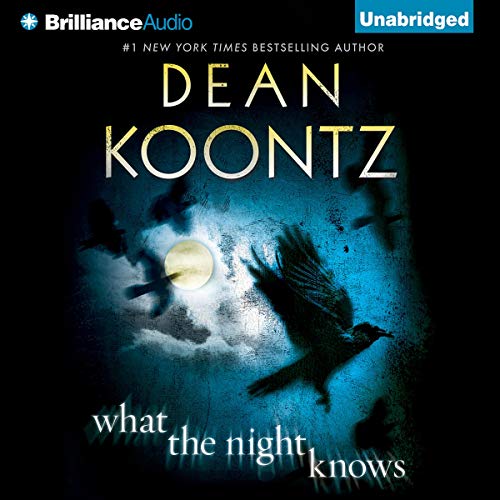 What the Night Knows

What the Night Knows

In the late summer of a long-ago year, a killer arrived in a small city. His name was Alton Turner Blackwood, and in the space of a few months he brutally murdered four families. His savage spree ended only when he himself was killed by the last survivor of the last family, a 14-year-old boy.

Half a continent away and two decades later, someone is murdering families again, re-creating in detail Blackwood’s crimes. Homicide detective John Calvino is certain that his own family — his wife and three children — will be targets in the fourth crime, just as his parents and sisters were victims on that distant night when he was 14 and killed their slayer.

As a detective, John is a man of reason who deals in cold facts. But an extraordinary experience convinces him that sometimes death is not a one-way journey, that sometimes the dead return.

Here is a ghost story like no other you have read. In the Calvinos, Dean Koontz brings to life a family that might be your own, in a war for their survival against an adversary more malevolent than any he has yet created, with their own home the battleground. Of all his acclaimed novels, none exceeds What the Night Knows in power, in chilling suspense, and in sheer mesmerizing storytelling.

“Dean Koontz... has the power to scare the daylights out of us.” ( People)
“Koontz seems to know us, our deepest foibles and fears.” ( USA Today)
“Koontz writes first-rate suspense, scary and stylish.” ( Los Angeles Times)

I have been a Dean Koontz fan for more years than I can count. I had been disappointed in some of his newer stuff, and preperred to re-read his older stories.
Finally! Here is a new one that was suspensful, great storyline and the dialog was believable. However, in some places in the story, I did get a little confused but was able to catch up quickly.

I felt this was Vintage Koontz and it was very enjoyable. I may read it again next week!

One of the better Koontz books

Yes, he's wordy and overly descriptive. It's his style. If you don't like it, don't read a Koontz book. But if you do like his style and his books, you will love this book. I didn't find it predictable at all. The narrator was perfect and drew me into the story and kept me totally entertained. I'm ready to start listening to it all over again.

Although I know Koontz can be somewhat redundant in his plots, I thought this was an entertaining and fresh approach to his supernatural narrative. I have been disappointed by some of his recent work, but thoroughly enjoyed this story. Wordy, yes at times, but not irrelevantly so. Kept my interest, and not particularly predictable, in my opinion, except for the "good will win out over evil" theme that is Koontz's trademark. If you want something else, something less traditional good/evil, read Stephen King.

This was a very good book. If you have read a lot of Dean Koontz books then you are used to the super-natural aspect that they sometimes have. I would suggest not reading them if you can not free up your mind a little because some on them, like this one, require an open mind for a part or two! If you can do that just a little then this book won't disapoint, but if you have to understand the science behind every aspect of a book then you will have a moment or 3 that will have you unhappy. Again, I loved this book and I look forward to the next one.

I have read all of the Koontz books,new and old, and was disappointed in the last few but "What the night knows" brought back the Koontz I love to read or listen to. Very enjoyable.

Back In Fine Form

The last Koontz novel I listened to was way below his standards. Great idea, poorly executed.

This one has plenty of energy and plenty of twists...a lot of supernatural activity...and definitely draws you in. If I could have changed one thing, I would have made it slightly less grisly...especially as some of the victims are kids. But I still really liked it, and will probably be back to listen to it again at some point.

Stephen Weber does a fairly good job of narration. He's not in the class of Patton and Guidall...but he's also a big better than average. He didn't distract from the story as so many narrators do. Solid overall.

What a disturbing book. I wonder how he thinks up story lines like this. The old Dean Koontz is definitely back. It is well written and narrated. If you want to be terrorized, this book is for you.

Dean Koontz is Back!

After a couple of disappointing offerings, Mr. Koontz has once again produced a story that is fresh, has a plot we all can follow and carries it through to the end. I give it four stars here because, in my opinion, he is generally (when on his game) a four star writer - with the notable exception of Watchers, the 5-star book that made me a lifelong Koontz fan - and that is Okay! His work is interesting, uncomplicated and fun to read. Thanks Dean!

I really love this author, he has written some of my all time favorite mysteries. This time however, I must agree with some of the other disappointed reviewers. Although the plot was fairly interesting on it's own, I agree that this story has some of the same aspects of the more recent novels, perfect marriage, perfect kids, rich rich family, fancy house with extra security, etc, etc. The novel lacked depth and intrigue for me, sorry. I too found it all too predictable and would be happy to welcome back Odd Thomas or something new that would remind us all of why we love this author so much. This novel pales in comparison to From the Corner of his Eye in my opinion. Still, I'm glad to have listened.

One of his best.

I love Dean Koontz books and some I like better than others. This one is one his best books. Get it!