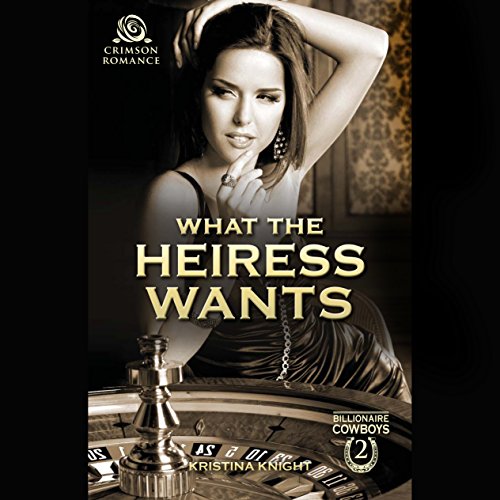 What the Heiress Wants

Denver publishing heiress Miranda Clayton craves more from life than society parties and shopping sprees, but her tycoon father refuses to take her seriously. Her solution? Beat him at his own game by going to work for his top competitor, Connor Reeves, in Las Vegas.

Connor isn't fooled by Miranda's new plan for a second. He knows exactly who she is; what he doesn't know is why she's pulling him into her games. After their first meeting, Connor knows what he wants - Miranda in his bed! But the more he's around his new vice president, the more he wants something deeper than a short-term fling. The question is does the lady want Connor - or his business?

"Carly Robins's narration reflects the sensual charm and determination of publishing heiress Miranda Clayton - who knows exactly what she wants and goes after it. Believing that she's not taken seriously at her father's company, she jumps ship and signs on with a rival company owned by Connor Reeves. Robins portrays Miranda with a mix of confidence in her abilities and anxiety that her true identity will be discovered at her new job. Miranda's feelings are juxtaposed with Reeves's quiet suspicions of Miranda and his restrained attraction to her. While the pace of Robins's narration quickens and her pitch is higher during moments of tension, her velvety voice flows smoothly to convey Miranda and Connor's blissful moments. Robins brings out the emotion in a romance that blends cutthroat business with pleasure. (AudioFile Magazine)