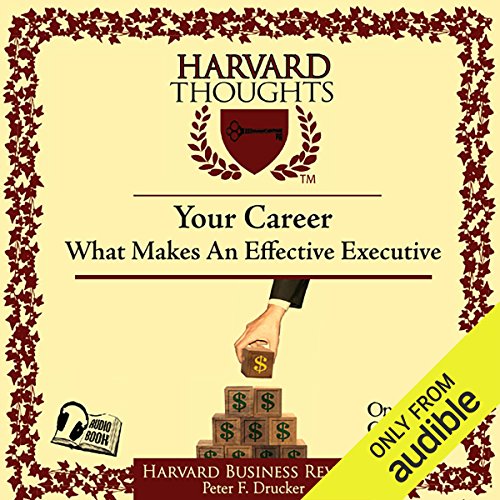 What Makes an Effective Executive

What Makes an Effective Executive

An effective executive does not need to be a leader in the sense that the term is now most commonly used. Harry Truman did not have one ounce of charisma, for example, yet he was among the most effective chief executives in U.S. history. Similarly, some of the best business and nonprofit CEOs Drucker has worked with over his 65-year consulting career were not stereotypical leaders. They were all over the map in terms of their personalities, attitudes, values, strengths, and weaknesses. They ranged from extroverted to nearly reclusive, from easygoing to controlling, from generous to parsimonious.

What made them all effective is that they followed the same eight practices:

One of Drucker's best

Drucker describes extremely clearly what effective executives all have in common. And he iterates that regardless of your personality traits, you can still run a successful company if you are an effective leader with strong leadership skills. He talks about what those skills are without a bunch of motivational fluff you see in other books. Everything in this book is valuable.

Only wish that it were longer

I listen to this short recording once a month to keep me on track as I run my company.

...but not as inspirational as I would hoped. However, I will do my best to put these ideas into action.

I love how clear and concise the message is. It is short and brief, but is very informative. It gives a blueprint of how a business should operate. It is one of the best investments of 20 minutes I've ever made. If you want a no nonsense approach to business that limits subjectivity and maximizes objectivity, this is a great start!

Must read this book. If, one wants to achieve success effectively. This is useful and applicable on an individual level as well, with some basic creative thought.

One of the best 27 minutes I've ever had. A must read for those in charge. Well worth the money.

Good little synopsis for a quick commute listen. Nothing too deep, though. Probably only got about one good note out of the listen.

Drucker's insights are still valid in today's fast pace world and this is a great short listen with lots of food for thought!

Short powerful to the point

I imagine this is like his book on the subject reduced to its essential points. Only other comment: while this is a business title, the narration is very flat making it easy to miss the fact that he had moved on to a new point.