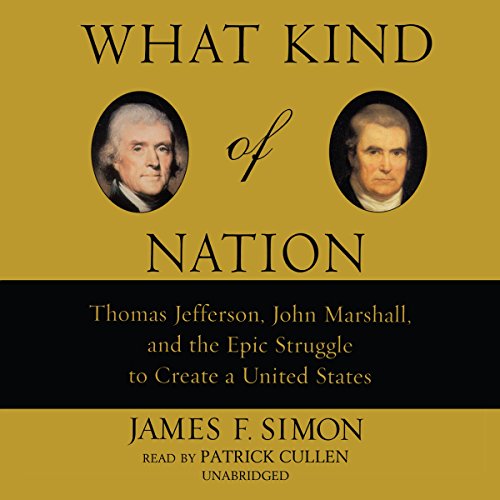 What Kind of Nation

The bitter and protracted struggle between President Thomas Jefferson and Supreme Court Chief Justice John Marshall defined the basic constitutional relationship between the executive and judicial branches of government. More than 150 years later, their clashes still reverberate in constitutional debates and political battles.

In this dramatic and fully accessible account of these titans of the early republic and their fiercely held ideas, James F. Simon brings to life the early history of the nation and sheds new light on the highly charged battle to balance the powers of the federal government and the rights of the states. A fascinating look at two of the nation's greatest statesmen and shrewdest politicians, What Kind of Nation presents a cogent, unbiased assessment of their lasting impact on American government.

It is often the case that what we know is limited to our perceptions. In the case of the United States our knowledge says it's always been what it is, then you read a book like this and you realize that the country was and is ever evolving. it did not announce itself upon the world whole, compete, and capable of being. instead the great men of history, Jefferson and Marshall had an idea of what it was and had to work towards those ends. it took time for the country to know what it was and what it would be.
grateful for books like this that help grow my perception and increase what I know.
it helps that it did so in an enjoyable way.

I wish this was required reading

The writer takes an inherently complex topic and makes it understandable for the rest of us. As a law student, it is a great start to your 0L summer reading. Heck it would even be worthwhile if you just really liked Hamilton and wanted to know more of what was going on during that time period.
Taking the AP exam? Give this a read and tie in some context to your studies.

Interesting but a bit too biased for me

The conflicting visions of Jefferson and Marshall vis a vis the shape of the United States is fascinating and key to understanding our history and our nation. Simon does a good job laying out a bit of biography of each, and then focusing on the rulings that highlighted their differences.

What I didn't like was that Simon often stated as fact the Jeffersonian view of Marshall, and Adams and the rest of the Federalists for that matter, without explaining the ideological context in which his opinion was formed. With such contentious material, historical, cultural and ideological context and background is really key to understanding both sides of the issues. Simon did not convince me that he was sharing the whole story.

All that being said, learning about John Marshall is absolutely worth it. I read this after reading McCullough's John Adams and Chernow's Hamilton, and am very glad I did. Although lay people (non-lawyers) may not know and appreciate Marshall's importance, it turns out that he had as much to do with shaping the United States as any founding father. But, I would recommend reading Without Precedent to learn about this fascinating, important and inspiring man.