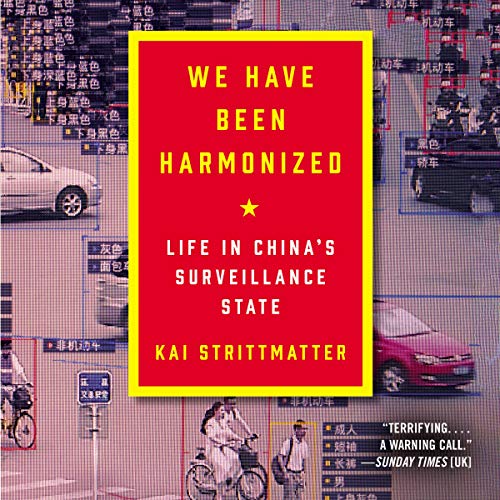 We Have Been Harmonized

As heard on NPR's Fresh Air, We Have Been Harmonized, by award-winning correspondent Kai Strittmatter, offers a groundbreaking look, based on decades of research, at how China created the most terrifying surveillance state in history.

China’s new drive for repression is being underpinned by unpre­cedented advances in technology: facial and voice recognition, GPS tracking, supercomputer databases, intercepted cell phone conver­sations, the monitoring of app use, and millions of high-resolution security cameras make it nearly impossible for a Chinese citizen to hide anything from authorities. Commercial transactions, including food deliveries and online purchases, are fed into vast databases, along with everything from biometric information to social media activities to methods of birth control. Cameras (so advanced that they can locate a single person within a stadium crowd of 60,000) scan for faces and walking patterns to track each individual’s move­ment. In some schools, children’s facial expressions are monitored to make sure they are paying attention at the right times. In a new Social Credit System, each citizen is given a score for good behavior; for those who rate poorly, punishments include being banned from flying or taking high-speed trains, exclusion from certain jobs, and preventing their children from attending better schools. And it gets worse: Advanced surveillance has led to the imprisonment of more than a million Chinese citizens in western China alone, many held in draconian “reeducation” camps.

This digital totalitarianism has been made possible not only with the help of Chinese private tech companies, but the complic­ity of Western governments and corporations eager to gain access to China’s huge market. And while governments debate trade wars and tariffs, the Chinese Communist Party and its local partners are aggressively stepping up their efforts to export their surveillance technology abroad - including to the United States.

We Have Been Harmonized is a terrifying portrait of life under unprecedented government surveillance - and a dire warning about what could happen anywhere under the pretense of national security.

Ce que les auditeurs disent de We Have Been Harmonized

A must listen on China

I’ve read about thirty China related books on audible and this is one of my favorites. A must listen. Connecting to George Orwell is a nice touch. Modern day description of 1984 come to life.

a sincere warning of what's coming our way in the West. Highly recommended read for those awake

This should be taught in High School Social Studies!

There are a few books that peel back the veil of what China is doing. On the surface it seems very morally sound but unfortunately their long-term plans do not align with what has made the United States so great. Their success in appealing to Westerners as well as dividing us even to the point of meddling in our politics. They’ve been teaching in our schools for decades. We need to start teaching in our own schools so we can prepare appropriately for this threat.

This is a well written and preformed audio book about a country that most Westerners have no clue about. If you want to understand Communist China and the way technology and money are changing the way WE think then this is a great way to spend a credit.
Terrific book regardless of your political affiliation.

I tried to enjoy this book...

I purchased this book hoping to learn more about how the Chinese government conducts its mass-surveillance of its citizens, and how it is attempting to expand those capabilities worldwide. I tried to enjoy the work, but I couldn't get past the constant references to how Donald Trump operated in the US (not that they weren't justified). Point is, if I wanted to read about how poor a job Trump did, I'll visit Salon or Vox or the Atlantic. You don't need to burn a credit on those sites. It's well written, but I just couldn't enjoy it.