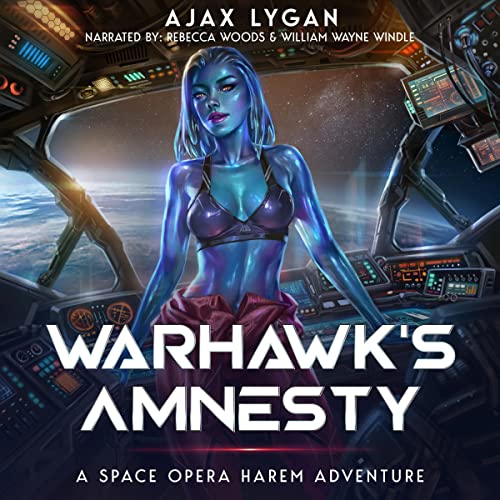 One week. Just one more week.

Inmate 5313 reached the end of his sentence after 10 grueling years. That is, until the wrong question led to a beating with an exclusive stay in the fridge.

Before the badges manage to lock him into cryostorage for a nightmare-fueled nap, several explosions send the prison barge plummeting into a frozen planet in unclaimed space.

This is the first day of Seb’s freedom, an ill-starred future that includes banding together with cutthroat mercenaries, bartering with sordid information brokers, and fighting against the galaxy's ruthless corporations.

He'll fight tooth and nail to fulfill his lifelong dream of building his own ship. But what's a ship without a crew? In a galaxy where everyone carries a blaster, Seb will need to find people he trusts.

The story goes through one extreme scenario after another, but is written fluidly and you don't realize how far the story has progessed until giving it a second read. The MC is competent and even though it's a harem the females act completely independent of MC and have their own profound character traits and personalities.
Rebecca Wood being the Narrator of the story was a great move. She has such a wide range of voices you easily get immersed into story. Windle appears to be new narrator and he does very well. He has the voice that can make even the most outlandish lines not sound condescending. He would have saved a few audiobooks that had overly arrogant sounding MCs.
Overall, this story hit all the points that make a good space opera. Looking forward to book 2 with all the set-up it is given.

What a great start to a series! Keeps your attention right from the start and just gets better as it goes on. A few explicit scenes but not too many to take away from the story. and the narrators did a fantastic job as well. Looking forward to the next release.

A deeply in debt college student commits corporate espionage to try and get out from under his debt. Ten years later he is just days away from getting out of prison when the transfer ship he is on goes down and everything is not as it seems. Now he must hide from those responsible as he tracks across the Galaxy.

Rebecca and William do a fantastic job with the narration!

This was a fun audiobook! I really enjoyed it and can't wait to find out what happens next!

This was a great story that is just beginning to build into something absolutely amazing.

No overpowered and attention hogging MC. Just a normal guy and his beautiful girls fighting for what they want and doing it as a team.

Can’t wait for the next book in the series.

5 stars all the way around. I honestly can't wait for book2. Rebecca and William ... ya'll did a wonderful job. Oh and check out Ajax's page for the extra covers' artwork. Those helped me alot with the visualization of the ladys..

Way better than I hoped, far exceeded my expectations

The narrators were great and really brought this one alive.

I’d been sitting on this one for a bit, because sci-fi, but I’m glad I listened, because I’m absolutely hooked.

The action picks up immediately, and the women who are introduced are the things good dreams are made of.

I’ll be checking out the next one for sure.

This was an amazing audiobook and I was very thrilled by the quality. WOuld recommend.

Ok so seriously this is a fantastic book. Rebecca woods makes everything in my life better first of all. But the story is fantastic. It starts out with plenty of action and exhilaration, but about half way through it gets a bit of slice of life action for relationship development. New series, and I’m anxious for more. Great job Ajax Lygan!

Outstanding start to a new series

I’ve been a fan of this authors work starting with The Aspect and then in the podcast A romp across Aedna.
The characters are well thought out and the harem elements are a good slow lead up. Nothing is rushed in any of these works. Another thing I think that is different is the very in depth way the world building is described. It’s lengthy and well thought out. It makes easier imagination on the reader or listener.
This character has some cool Snake Pliskin” vibes from escape from New York. He is flawed, but you feel for him.
The narrator does a very good job as well in acting out the multiple characters. The inflection is tight and solid.
I’m looking forward to more!