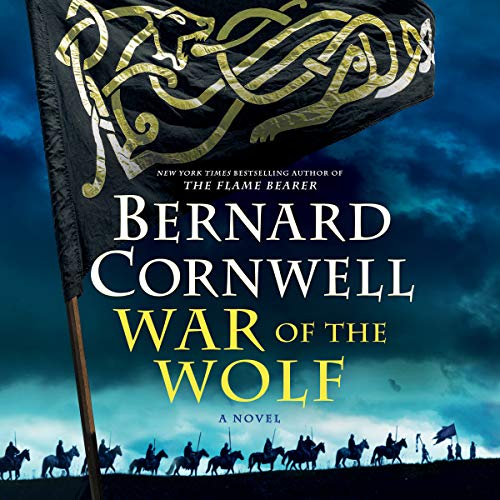 War of the Wolf

Bernard Cornwell’s epic story of the making of England continues in this 11th installment in the best-selling Saxon Tales series - "[L]ike Game of Thrones, but real" (The Observer) - the basis of the hit Netflix television series The Last Kingdom.

His blood is Saxon. His heart is Viking. His battleground is England.

"Perhaps the greatest writer of historical adventure novels today" (Washington Post), Bernard Cornwell has dazzled and entertained fans and critics with his best-sellers. Of all his protagonists, however, none is as beloved as Uhtred of Bebbanburg.

And while Uhtred might have regained his family’s fortress, it seems a peaceful life is not to be - as he is under threat from both an old enemy and a new foe. The old enemy comes from Wessex, where a dynastic struggle will determine who will be the next king. And the new foe is Sköll, a Norseman, whose ambition is to be king of Northumbria and who leads a frightening army of wolf-warriors, men who fight half-crazed in the belief they are indeed wolves.

Uhtred, believing he is cursed, must fend off one enemy while he tries to destroy the other.

In this new chapter of the Saxon Tales series - a rousing adventure of courage, treachery, duty, devotion, majesty, love, and battle, as seen through the eyes of a warrior straddling two worlds - Uhtred returns to fight once again for the destiny of England.

It was Good I miss Jonathan Keeble

I enjoyed the adventure.
Fate is everything
Fate is inexorable.
The 3 spinners that woven Ulthred's life made it incredible to follow the twist and turns.

Jonathan Keeble was the best performance.
although Matt Bates is good, it is not the same.

The books with Jonathan Keeble was an incredible journey
It is the same journey and I enjoyed it but....it will never compare.
"It is like having Mom's favorite meal made by someone else. It was good but it will never be like Mom's"

Another fun read in the series!

I have to admit I have not enjoyed each of the books in the series as much as others, but this was a good one. If you follow any of Bernard Cornwell's series, this was right up there. I enjoyed it.

Memior of an aging warrior

As Utred has aged in the series the feebleness of injuries long healed and the tide of fate that seems to drag him along in what he refuses todo all come to a head when the battle is no longer something looked forward to, but must be done. Utred isn’t dead yet and any ersling thinking to call him old is still a fool that is too slow.

I've been waiting for this book all year, and somehow in my head I thought it would be the last... to my relief it is just another chapter in Uhtred's life.
I thought the cadence of Matt Bates was slow and tired throughout the book, but then I thought - Uhtred is slow and tired - so the cadence was actually perfect when in context.
Many times during the book I felt like I've heard the story before - but some stories are worth hearing again so I didn't mind.
I was disappointed in the lack of participation of some of my favorite characters - but that is on me, not the author or book - I just love Uhtred the Younger and wish there was more of him in this book. Not my favorite book in the series, but it was worth the credit and a good addition to the overall series.

Just like every book in this series, I laughed, I cried, and in the end I was left wanting more Uhtred. I wish it would just go on and on...

Tune everything out, just to listen

I anticipated a beautiful ending to the Dane/Saxon tale, but I see that Mr. Bernard Cornwell still have tales to tell. I patiently awaiting for the upcoming novels. I can see two or three more novels but I am really pushing it with three. If you are a fan you will enjoy the telling of War of the Wolf. Got home and stayed in the car until it was over.

He did it again. Excellent book! If you liked the others you will really enjoy this one!!!

Every book BC writes I can’t put down. Uhtred of Bebbanburg is a Lord of Lords. Uhtred and England has grown before our eyes on Tv and this great series. Uthred is the lovable War Lord that always does the right thing. Can’t wait for the next book in this great series...

Great continuation of the saga.....I personally hope that Cornwell keeps this going!!! Excellent writing and Narration by Matt Bates. In my opinion Cornwell and Bates are made for each other!

Better than the Netflix Series