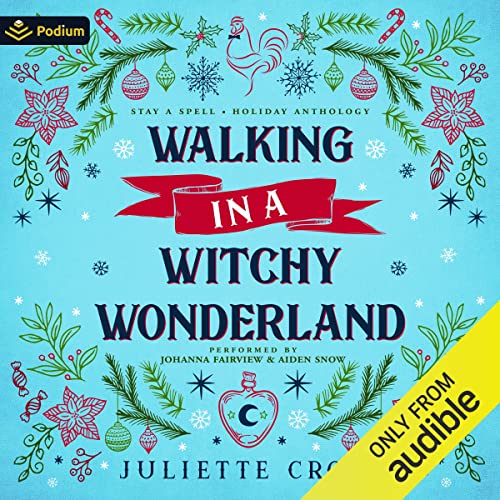 Walking in a Witchy Wonderland

Getting hexy for the holidays! Five sexy stories set in the Stay a Spell world you don’t want to miss, where mischief and mayhem dominate the holiday season for the Savoie sisters of New Orleans.

Bewitch You a Merry Christmas: Always the peacemaker, Evie conjures Christmas magic between a hexed hottie and his witchy neighbor, while Mateo and Alpha plan to do whatever it takes to get some alone time with their girl.

Rockin’ Around the Hexmas Tree: A dirty Santa gift with a very special hex boosts Devraj and Isadora’s sex life from sizzling hot to scorching.

Jingle Bell Jock: On New Year’s Eve, a new man puts the moves on Charlie. Tired of pining for his best friend, he’s ready to move on. Fortunately, JJ’s jealousy is just the right ingredient to move them well out of the friend zone.

You’re a Mean One, Mr. Grim: Her first glimpse of grim reaper Gareth Blackwater evokes a major case of insta-hate in Lavinia. In that same moment, Gareth is hit with insta-lust. Fate is playing with them both, and neither one is happy about it.

Already a fan of the series?Prefer audio, GET THIS

Once Juliette dropped that she'd be doing a holiday anthology with some of our favorites from the Stay a Spell series, I knew that I'd have to get my hands on the audio. The narrators are seriously EVERYTHING especially Aiden who brings are beloved heroes to life. You definitely won't be disappointed by narrators.

When a novella gives you a bit more than bonus scenes! If I couldn't love a series even more. I'm beyond happy that Juliette gave us something to tide us over until next year, when the next book comes out. Walking in a Witchy Wonderland is not a standalone... kinda, maybe? Just read the books in order, that's all I ask.

As much as I loved visiting the Savoies and their counterparts, I enjoyed seeing everyone's perspective about each couple. It was something that I didn't know I needed. There's really no getting past any of the sisters, they see everything.

If you were curious if we'd be getting any steam, pshhhhh, Juliette would never do us the disservice. The steam is here and my goodness, it's HOT. But not surprised ;-)

Such a fun read and probably something I'll re-read until next year. We do get a glimpse of of what's to come in the next books and my goodness, all the damn intrigue. I'm not sure how I'll be able to wait because I'm beyond ready for those books.

A delightful treat for Stay a Spell fans!

I like it. Time lines were a bit confusing though. The first three books had a different rhythm, these stories were like choruses the author wasn’t sure where to be placed. Enjoyed the short stories.

I can't wait for the next audio book. I don't have much time to read and so I really enjoy a good audio book. This has been a great series and I have been pleased with it.

I love this anthology of holiday novellas from the Stay a Spell series! Favorite couples are back, Evie and Mateo’s triplets are an adorable handful, and JJ and Charlie get out of the friend zone.

The narration is simply perfect, just as in the other audiobooks in this series! I highly recommend this anthology for fans of the Stay a Spell series by Juliet Cross.

Walking in a Witchy Wonderland by Juliette Cross

This was super sweet and fun!! This anthology is #3.5 in the Stay a Spell series and gives us small glimpses into the lives of our established couples from books #1-3 (Mateo x Evie, Devraj x Isadora, and Nico x Violet) and foreshadowing to future couples we’ll come to know and love. We also finally got JJ and Charlie’s romance!! My heart.

I loved every second of this, and now I’m back to (not so) patiently waiting for Grim and Bear It to come out.

Oh, I just loved these short stories and visiting with the Savoie sisters, their mates, and friends. Each story gave us a small glimpse in time - past, present and future in the series timeline. Just the perfect length for each story to be engaging and the characters to have depth. I especially loved hearing Charlie and JJ’s story and Livvy and Gareth’s. This is a great companion book to the other books in the Stay a Spell series but it could be read as a standalone as well.

Aiden Snow and Johanna Fairview did a phenomenal job narrating the story and characters into life with enough change of inflection, tone and cadence to voice multiple characters quite convincingly.

This was a short anthology that gave us a couple of (well, actually 5) quick views into the lives of the characters from prior stories. The anthology itself started slowly for me. The first couple of stories were okay, but there was a bit too much of the "coupleness". In other words, I never thought I would say that there was too much "sexy times" but....there was. At least for the first two stories.

What actually really excited me was the story about Charlie and JJ. We had been given snippets of their story over the course of the series, but never any specific details. I enjoyed seeing their story arc and that was definitely my favorite story from the anthology.

I also enjoyed the last story that showed Nico and Violet babysitting the three triplets (from Mateo and Evie) - that was funny - realistic, but funny.

The narrating duo was Johanna Fairview and Aiden Snow with Mr. Snow being my favorite of the two.

All in all it was an "okay" addition to the series, but if you missed it - no harm done.