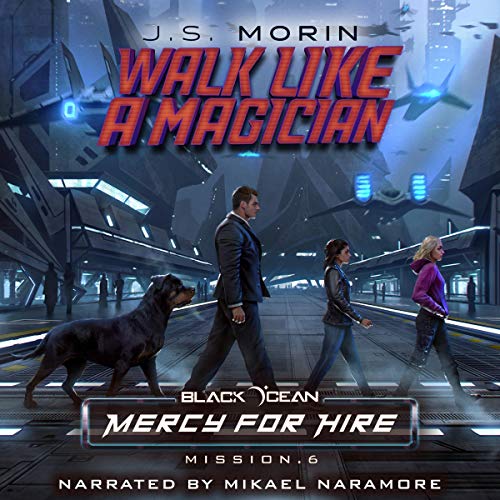 The witch is back!

Esper tracks the Cult of Ra to an arms factory on a grimy colony world. With limited magical resources, they're reduced to doing their vigilante act the old-fashioned way. But when their best efforts fall short, Esper is forced to make an impossible choice.

In the aftermath, Esper is going to have to reevaluate her priorities and rediscover what magic means to her. With her powers returned, so has the dark voice that haunts her day and night. A reckoning is coming, and the only way to get out alive is to give in and be the wizard she's always had inside her.

Walk Like a Magician is the sixth mission of Black Ocean: Mercy for Hire. It follows the exploits of a pair of do-gooder bounty hunters who care more about saving the day than getting a payday. Mercy for Hire builds on the rich Black Ocean universe and introduces a colorful cast for new and returning listeners alike. Fans of vigilante justice and heroes who exemplify the word will love this series.

Grab your copy and don't get left behind.

I love this group of characters and can't get enough! Just hoping Mr. Morin keeps this series alive!

Good per the usual

I loved it. it just seemed to get over too quickly is all. I think it could be a little riskier even. The accent of the "hillbilly samurai" and the idea of the character was pretty dorky, but it "kinda" grows on you.