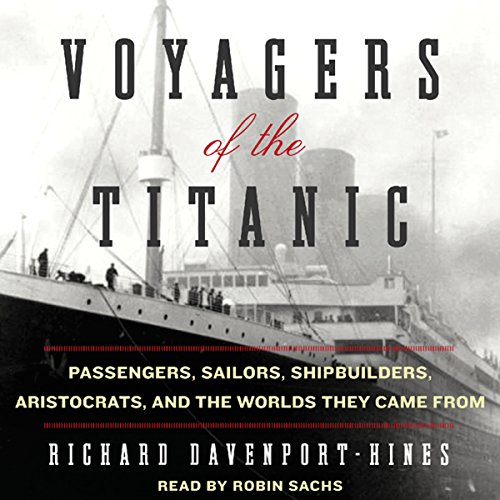 Voyagers of the Titanic

Late in the night of April 14, 1912, the mighty Titanic, a passenger liner traveling from Southampton, England, to New York City, struck an iceberg four hundred miles south of Newfoundland. Its sinking over the next two and a half hours brought the ship—mythological in name and size—100 years of infamy.

Of the 2,240 people aboard the ship, 1,517 perished either by drowning or by freezing to death in the frigid North Atlantic waters. What followed the disaster was tantamount to a worldwide outpouring of grief: In New York, Paris, London, and other major cities, people lined the streets and crowded around the offices of the White Star Line, the Titanic’s shipping company, to inquire for news of their loved ones and for details about the lives of some of the famous people of their time.

While many accounts of the Titanic’s voyage focus on the technical or mechanical aspects of why the ship sank, Voyagers of the Titanic follows the stories of the men, women, and children whose lives intersected on the vessel’s fateful last day, covering the full range of first, second, and third class­—from plutocrats and captains of industry to cobblers and tailors looking for a better life in America.

Richard Davenport-Hines delves into the fascinating lives of those who ate, drank, reveled, dreamed, and died aboard the mythic ship: from John Jacob Astor IV, the wealthiest person on board, whose comportment that night was subject to speculation and gossip for years after the event, to Archibald Butt, the much-beloved military aide to Theodore Roosevelt and William Taft, who died helping others into the Titanic’s few lifeboats. With magnificent prose, Voyagers of the Titanic also brings to life the untold stories of the ship’s middle and third classes—clergymen, teachers, hoteliers, engineers, shopkeepers, counterjumpers, and clerks—each of whom had a story that not only illuminates the fascinating ship but also the times in which it sailed. In addition, Davenport-Hines explores the fascinating politics behind the Titanic’s creation, which involved larger-than-life figures such as J. P. Morgan, the ship’s owner, and Lord Pirrie, the ship’s builder.

The memory of this tragedy still remains a part of the American psyche and Voyagers of the Titanic brings that clear night back to us with all of its drama and pathos.

"Voyagers of the Titanic," as its title implies, focuses on the people rather than the technical aspects of the wreck. Davenport-Hines organizes the stories into groups: among them the shipbuilders, the ship's officers, and the first, second, and third class passengers. I was particularly pleased to see so much attention being given to second class, which was given short shrift in the movie "Titanic" and in many other accounts of the disaster.

Up to the point where the iceberg strikes, each chapter is filled with interlocking mini-biographies of the people involved. The narrative is organized loosely in a kind of "six degrees of separation" style: branching out through the passenger list and giving a vivid sense not only of the people but of the world they inhabited.

The author reaps the benefits of this careful preparation in his narration of the disaster itself. These are not random people who show up on the boat deck: they're people we've met, spent some time with, come to have some opinions about. Davenport-Hines recounts the story of the wreck, the lifeboats, the rescue, the dissemination of the news: it's all familiar ground to Titanic buffs, but given here with superlative organization and a host of fresh details.

Anyone who's read more than one book about the Titanic knows how vastly different perceptions can be. Davenport-Hines takes a dim view of Senator William Smith's US Senate inquiry into the disaster, accusing Smith of "grating stupidity" and the hearings as "raucous scapegoating." Smith, of course, was virtually the hero of Wyn Craig Wade's book, "The Titanic: Disaster of the Century."

I don't think I would recommend this to someone as the first book to read on the subject - that would still have to be Walter Lord's classic - but it's a compelling listen, a very thorough account of the subject, and it should definitely be the second or third book on your Titanic list.

If you’ve read as many books and seen as many documentaries about Titanic as I have, you’ll willingly add this book to your list.

It’s like a little collection of biographies of people whom you already know a little about. Having seen movies and TV series and documentaries, you’ll recognize most names and already have an understanding of how the main characters relate to one another. This book fleshes that out in more detail by providing additional background information and interesting facts about the key players’ lives.

Survivor’s recollections of the sinking itself were compelling, as well as the long cold wait for rescue. (Wouldn’t that make an interesting movie? A couple whose vacation plans are interrupted when their boat (The Carpathia) alters course to rescue Titanic survivors…).

I was not expecting to learn anything new, but I did! Not just trivia like how many napkins and nutcrackers and wine bottles were on board the Titanic (LOTS) but about how so many passengers were bound for Canada for example, and what their plans would have been had they survived the sinking.

The book also includes a lot of details of the days in New York just after the sinking; I found this the most interesting of all because this part of history is often overlooked. Attention is usually always focused on the boat, very little to the people left behind. I had no idea there were so many imposter-grievers! People pretending they lost loved ones in the sinking!!

The “what ever happened to” section at the end where we learn the long term fate of survivors is poignant (although a little ghoulish) because it exposes how an experience like this can impact a person deeply for life.

It was a great read – I highly recommend it.

Outstanding in every way

This is the only book I have read about the Titanic, so I don't have others with which to compare it. That said, I couldn't be more delighted with this book. After I finished listening, I also bought it in hardcover.

Davenport-Hines writes with eloquence, erudition, and authority, and Sachs' elegant narration matches the quality of authorship.

The focus of the book is what attracted me to it: the people and "the worlds they came from." From the workers whose back-breaking labor fueled the ship to the pampered existence of the wealthiest passengers in First Class, the sociological reality of the time is illuminated through details of everyday experience. To me, this is the most fascinating part of reading history. I enjoy minutiae, which this author provides in abundance.

Wonderful period information. Full of generally unknown detail. Paints a portrait of an era, as well as a ship. The narrator captures voices from the past.

History is fascinating! No more than the sinking of the Titanic. I really wanted to get into this book and find out more about its passengers and the horrors they faced. The sacrifice with a stiff upper lip! It is all here except that the narrative is so dry and the performance sub-par. What a shame! There are parts within the book that is so harrowing and heart breaking as I knew it would be. As I listened, I lost my way due to the excruciating detail of names, places and relationships. Perhaps I need to listen to it again with a different mindset to capture the background of the individuals of first class through steerage. The story deserves it.

I enjoyed "Voyagers of the Titanic" much more the second time than the first time I listened to it. It seemed very dry and boring with lots of numbers and statistics and lists of names and where people were from, but the next time I listened to it, I was able to listen to the story behind all those people and it was very interesting indeed.

What did you love best about Voyagers of the Titanic?

It was an interesting - I learned a lot. The author folded in all of the information and details beautifully....

He made the tragedy far more "personal" with so many stories of the individuals involved with both the construction of the ship and those on the voyage.

Which character – as performed by Robin Sachs – was your favorite?

Hard to specify that with this type of book. I think the "regular" people he talked about ..such sad stories.

I certainly got teary...

The narrator did a simply outstanding job....

Fantastic read for the Titanic buff

When you have read as many books on the Titanic disaster as I have, it is really difficult for me to find a new slant on the shipwreck. This author has done just that for me, he has found a new way to tell the story, from the viewpoint of the people who participated. Instead of focusing on how the ship reacts to the iceberg, he focuses on how the people react to the disaster. You feel as though you get to know the people who planned the ship, those who built the ship, those who sailed on the ship and those who survived the ship and went on to live out the rest of their lives. I was deeply inthralled to learn so much about the people. A fantasic read for the true Titanic buff. The reader for this title was excellent and I thoroughly enjoyed my audio experience.

What made the experience of listening to Voyagers of the Titanic the most enjoyable?

I always find it fascinating to read the personal stories of the participants in an event - good or bad - and this book reveals insights into the passengers and crew that you don't see in most histories. I recommend it for any Titanic enthusiast or person interested in the lives of people of the period.

What was one of the most memorable moments of Voyagers of the Titanic?

Understanding the impact on families who lost loved ones.

A Penetrating Picture of Titanic

What did you love best about Voyagers of the Titanic?

All the various letters from the individuals who sailed on the Titanic provides a unique picture of life on board. It gives a very thorough picture of those who were on the ship from across all of the classes and crew.

What other book might you compare Voyagers of the Titanic to and why?

My immediate comparison is to Lost In Shangri-La.

I did, because Sachs was able to bring each of the characters to life in their own words.