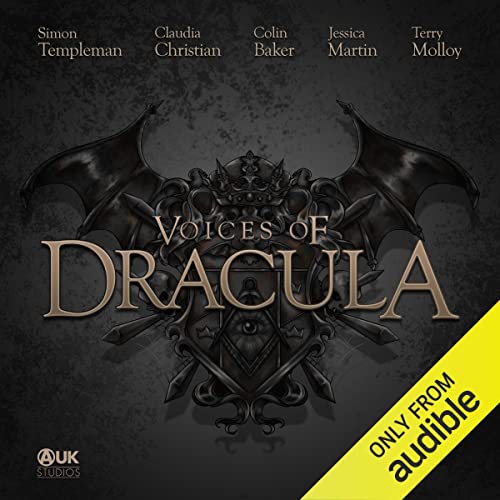 In writing Dracula, Bram Stoker created a universe full of rich characters, dark and foreboding locations, and a tangled web of loyalties, relationships and motivations. Despite the story being fictional - at least one hopes that’s the case - many elements within the story were reflections and analogies of the Stoker family and their history.

Narrated by some of the leading voice actors of today, Stoker’s short stories are dark, twisted and of course hugely entertaining. Simon Templeman (Legacy of Kain, Dragon Age, Dead Space 3, Charmed and so much more) plays Dracula, with all the expertise and finesse one would expect from such a lauded performer, whilst Claudia Christian (Babylon 5, 9-1-1, Disney’s Atlantis: The Lost Empire) is the mysterious Thief. TV’s sixth Doctor, Colin Baker (Doctor Who, Kingdom, Hustle), masterfully narrates vampire hunter Van Helsing’s stories, whilst Terry Molloy - most famous for playing the Doctor’s on-screen nemesis Davros - takes the part of Renfield. Jessica Martin (Doctor Who, The Sandman) completes the line-up as Mina Harker.

Keep up the great work.

Loved being able to get more in-depth insight characters within the Dracula mythos. It wS especially nice to have them in short "bites" that made listening while doing things around the house. I didn't feel guilty for having to stop listening (didn't want to stop, but sometimes the schedule dictates time available) and didn't have to remind myself of any bits of the story by the time I got back to the recording. The ebb and flow of the storytelling was also reminiscent of Bram Stoker's style, but with a more contemporary structure. Well done. I look forward to more.