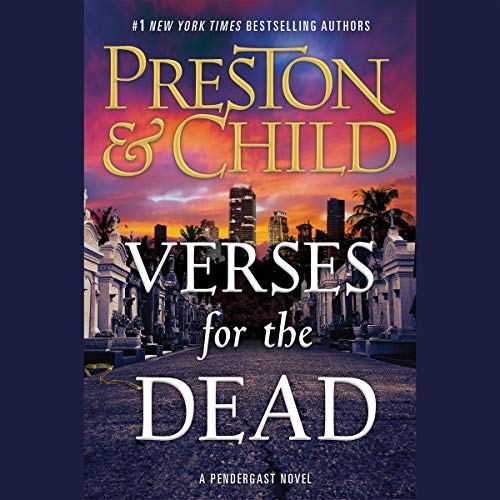 Preston & Child return with their number-one best-selling series, confronting FBI Special Agent Pendergast with the one challenge he never expected: a partner.

After an overhaul of leadership at the FBI's New York field office, A. X. L. Pendergast is abruptly forced to accept an unthinkable condition of continued employment: the famously rogue agent must now work with a partner.

Pendergast and his new teammate, junior agent Coldmoon, are assigned to Miami Beach, where a rash of killings by a bloodthirsty psychopath are distinguished by a confounding M.O.: cutting out the hearts of his victims and leaving them - along with cryptic handwritten letters - at local gravestones, unconnected save in one bizarre way: all belonged to women who committed suicide.

But the seeming lack of connection between the old suicides and the new murders is soon the least of Pendergast's worries. Because as he digs deeper, he realizes the brutal new crimes may be just the tip of the iceberg: a conspiracy of death that reaches back decades.

Let me start by saying if someone is going to leave a poor rating on a newly released book I would appreciate if a review was also posted. I don't think this is fair to the author or potential listeners. Luckily for Lincoln and Child, I believe they have enough dedicated readers who will ignore the low ratings without an explanation why.

Pendergast's newest book had me cringing at the beginning. Woman goes to the cemetery to visit with her deceased husband. She brought her Pekingese dog with her and ends up having a tug-of-war with him and the human heart the dog has found on top of another grave.
All of the Pendergast novels are very detailed and this one is no exception. This story is so intricately woven with details so specific you can close your eyes and see the different scenes unfold.
Of all the Pendergast novels, this one is as close to believable as I've seen. But again with the Lincoln/Child novels I don't look for believability, I look for a thrilling mystery with an outrageously shocking motive (it is!) that only Pendergast, with all his oddities can solve.
In this newest book Pendergast is teamed up with a partner (Coldmoon) who is part American Indian. Initially he is told by the new SAC to basically spy on Pendergast because of his strange ways. Things don't quite work out the way either expected.
I would really like to continue but I don't want to spoil this book for anyone else.
Renee Auberjonois as always does a wonderful job narrating.
If you found this review helpful please indicate so.
Thank You.

Another excellent Pendergast novel. While not a six or ten star read like Still Life or The Relic, this was fun engaging listen. I enjoyed it immensely.

An excellent addition to the series. Pendergast fans will not be disappointed. At least one reference to past events in SA Pendergast's new partner opens the door for a stands alone novel about his early career as well.

As usual, Rene Auberjonois' narration is superb. I would love to see Hachette Audio or Audible redo the first two books if the series with him as the narrator.

Pendergast doing what he does best

I found this a solid, highly enjoyable story that kept me engrossed from beginning to end. As much as the drama of Pendergast's personal life is always interesting, it can be like a very rich delicacy - best savored in small doses between other flavors. For me, this book was a perfect, pallet cleansing break-away that allowed Pendergast to do what he does best while introducing some other interesting characters and dealing with a typically interesting and plot-twisty Preston and Child mystery. The authors did a great job and I enjoyed every minute.

The wealth of characters who make up this fictional universe and the authors' ability to make you care about them even when they only pop up occasionally has always been a strong point for this series, and Agent Coldmoon was a great addition in this tradition. It was entertaining watching him and Pendergast interact, and he was an interesting character in his own right as well. I dare to hope that this will not be the last we have seen of him and that like many other recurring characters in the series we may see him again in future stories.

There was interestingly less of a true "monster" supernatural/weird science focus in this book than many of the previous, but I think that worked well for this story. It's good to mix things up and have variety, and I like the way the situations in this book were handled. Not every single little question was answered, but all the important ones were and it felt realistic somehow.

Mr. Auberjonois also deserves all the credit in the world for his wonderful narration. I don't know if I've mentioned it before, but it should definitely be mentioned since he does an absolutely magnificent job in this book, and in all previous ones. I really believe that no one else could bring this world to life quite the way he does and I very much enjoy and appreciate it.

Overall I thoroughly enjoyed this book and my only complaint would be that I wanted it to go on longer! I always mean to make these books last, and then I always binge them far too quickly and am sad when they are over. Already looking forward to the next one!

Decent listen ..but not amazing....

Good story but not great.

The plot is involved. The story just doesn’t have that magical feel like some of the previous Pendergasts . But Rene was marvelous as usual. Hope you like Miami.

IMHO not the best.

This is the first time that I haven’t given five stars to this series. For some reason this book just did not click with me. Usually I can’t put the “book”down can’t wait to finish it not so with this one. Yes I will continue to read the series just hope this was a one time thing.

I miss the multiple, complex plot lines and natural science points of interest

I’ll read any Pendergast novel with great enjoyment, and this one had a nice twist few will see coming. I also liked the new character, Agent Coldmoon. Compared to the early works of the series, however, it lacks the complexity of the multiple, grippingly suspenseful, richly interwoven plots. I also miss the interesting tidbits of natural science that enhanced the appeal of the earlier works. Except for some inconsequential mention of carnivorous plants, at the beginning, this feature was largely absent.

Not the best Pendergast

If the Pendergast novel The Cabinet of Curiosities was a 10 (and in my opinion it was), then by comparison Verses for the Dead is a 4.5. Not the best by far, but since it was Pendergast it was still entertaining.

Good but not up to Pendergast standards

As usual Lincoln and Child did a good book...that being said, am disappointed, as this is not the Pendergast we know....not in this book and not in last one that was done either. Good police detective story but missing Pendergast unusual shenanigans, and have just made him into an ordinary FBI agent with superior intellectual skills. In this book and the last one... the old Pendergast seems gone
Was disappointed by Smithback...thought he was being resurrected, or had maybe just been in hiding in witness protection.
Saving grace in this one....we did not hear much from the lackluster, no personality Constance Greene. Also gone is Digasta.
Miss his personality and would love to see more of Cory Swanson with her fiery personality, along with...never fail to get your attention Diogenis..

The long awaited next Pendergast

I love listening to Auberjonois, especially as Pendergast. Maybe the story could be a bit less far-fetched in some books, but I would listen to any story the man tells. He shouldn't try to speak German... without more schooling... but the stories spun are very entertaining.

I highly reccommend this book to all Pendergast fans. His side-kick partner would be an appreciated futute character.