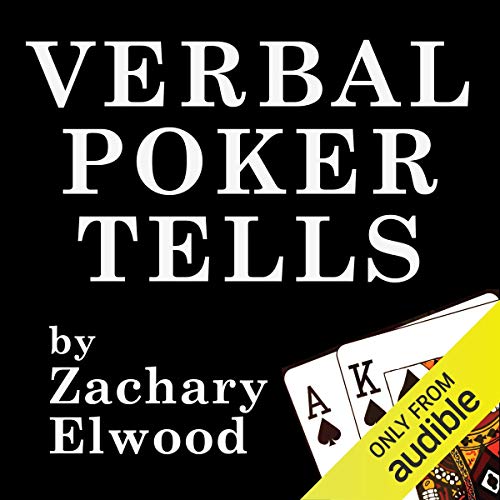 When poker players talk, they sometimes reveal information about their hands. Verbal Poker Tells describes the most common and reliable verbal patterns poker players have. More importantly, it gives you a framework for thinking about and analyzing verbal behavior at the poker table. The author analyzes many real poker hands: some from televised poker shows such as The World Series of Poker, Poker After Dark, and High Stakes Poker, some played by the author, and some submitted by other players.

Where does Verbal Poker Tells rank among all the audiobooks you’ve listened to so far?

It's a completely different audiobooks as it deals with vocal and physical tells. It's dry topic unless you're a student of poker.

What other book might you compare Verbal Poker Tells to and why?

Have you listened to any of Zachary Elwood’s other performances before? How does this one compare?

Where does Verbal Poker Tells rank among all the audiobooks you’ve listened to so far?

What other book might you compare Verbal Poker Tells to and why?

There are no other books or audio books that I know of that explore verbal poker tells with this much depth or even at all. For audiobooks on poker perhaps Phil Gordon's Little Green Book or Jarred Tendler's Mental Game of Poker because these are books with good but different information that are appealing to be listened to over and over again.

It is not a novel. All of the information is palatable and useable immediately.

The idea that when someone is bluffing they are less like to "limit their range" verbally. Brilliant concept explained by the author of the book,

I am so appreciative of the knowledge and wisdom of this book. I do not know how I ever played without listening to it before. I now have an idea of what players most likely mean by what they say and also know what not to do in my own playing behavior.

The title says it all and is the greatest praise I can bestow. Elwood's calm, observant, logical and humble nature is evident in his writing, and after listening to his trilogy multiple times I have immense respect for this author. Your books will be on my shelf and in my audio library both the remainder of my life sir.

I enjoyed Verbal Poker Tells and strongly recommend the book.


If you're reading this type of review, you're obviously interested in poker and trying to improve your game. You also must be interested in verbal poker cues and trying to make decisions based upon what your opponents are saying while you're playing a hand against them. This book is not going to revolutionize your game without a solid poker foundation. Still, I will admit that playing in more live tournaments recently, this book made me a lot more comfortable with reading casual player's verbal cues and has been well worth the time and money invested in the book, including the audio version.

I like Elwood's approach, which is trying to identify reliable verbal patterns. Elwood admits in the opening portion of the book that: "I've tried to establish a behavioral baseline that will, more often than not, be reliable. I don't pretend that the patterns in this book are universal, one-size-fits-all patterns. But if I've accomplished my goal, the patterns in this book will be reliable for recreational poker players more often than they're not reliable."

The standard comparison of this book is going to be to Joe Navarro and Mike Caro's work. I've never been a particular fan of Navarro even though I've read several of his books. Why? Navarro stuff certainly is interesting. Still, the patterns he refers to in his writings may be useful in an FBI interrogation or other contexts, but I never really found something that gave me an "ah-ha" moment for poker. Contrast that with Elwood, who did give me several "ah-ha" moments in his three-book series, and I continue to have more of these moments with additional runs through the material.

I am an active sports official, so I spend a lot of time reading individuals and verbal communication and body language at many sporting events. You can get pretty good at reading people that are attempting to deceive you in that context. For example: Did the pitch actually hit the batter, or are they faking being hit? But poker? It took several reads of Elwood's books to understand that I was falling for a pretty simple level of deception regularly at the poker table. Playing poker for a couple of decades, I admit that this was something that I missed until several go at of all three of Elwoods books. Until this sunk in, I had no idea how much I was falling for this fundamental concept from his books. This one concept alone has been transformative for me in several situations that left me scratching my head many time in the past at the poker table.

As for Caro's stuff? Even though much of Caro's stuff is decades-old, it has stood the test of time and is relevant for me. That's what I like most about Elwood's work; it builds upon Caro's work in a modern framework with additional layers and depth with some contrast. If your interested in this aspect of poker, I think you will find it valuable to spend time with both authors.

The Audible version of the book is excellent as well, and I enjoy reviewing the book periodically in that format as well.

So why am I writing this review? It's long overdue. I have had a few contacts with Elwood but only on poker forums and a brief email exchange where I did receive digital a copy of this book to review, trying to reconnect with someone we mutually knew. I had already purchased the audible version of this a couple of years ago book along with the other two books in the series in several different formats. Yes, receiving the digital copy was the catalyst for writing this review, but it also reflects my honest feelings about the book. The offer of the book put this book ahead of dozens of other books that I enjoyed but just never had the nudge to write a review.

Another reason I just like Elwood as an author. Elwood is humble in his approach to teaching. He has a style that presents useful information in a way that does not sound like an oracle preaching to his reader, which is common in many poker books today. Poker writing is tough because you expose yourself to a lot of second-guessing from your potential readers who all think they are pretty smart themselves on the topic. From a distance, I have seen him handle criticism with nothing but class.

In the end, it's though a review should come down to the content of the book and if it will help you become a better poker player. I can't answer that for you, but it has helped me read the verbal patterns poker table, enhanced my game, and has even helped me in few situations away from the poker table.

This book can take your game to a higher level

Reading tells and hiding your own tells are just as important as playing fundamental poker. This book opens a brand new world to me and I found that I missed so many good spots in the past. I will keep practicing and sharpen my skill. Keep up the grind guys.

a must-read for anyone looking to get better

this book is a must-read not that this will guarantee you will win however it will definitely improve your game dramastically this is definitely worth checking out I promise thank you for your time I love this.

Don't waste your time or money on this book...author may as well be selling snake oil.

Listened to it on 5 hour drive to poker room, listened to it while playing 2-5. I noticed many of the tells were spot on! Not something you can use every hand but will likely save you a bet a couple times a day.

interesting and very compelling book, opened up another Avenue to learning and improving my poker skills. I really appreciate the authors time and effort to publish something that I believe is invaluable to improving a poker players skill set.

This has been probably top 5 poker books I have read.

One of Pokers greatest audio books regarding verbal behaviour. Very applyable in local to mid stakes games. High Impact on your win rate. Especially the examples are making the book enjoyable to Listen to.