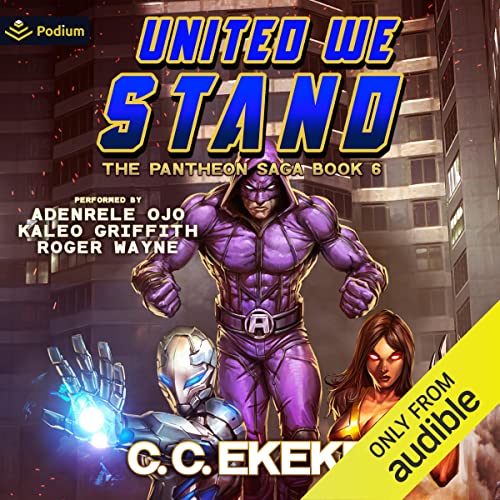 Greyson Hirsch has carved a bloody path of destruction across America in his war against superheroes. Fully embracing the villainous persona of Damocles, he now dedicates himself to ridding the world of these “false messiahs".

His next target is San Miguel’s own Aegis, known to friends and family as Hugo Malalou. By slaughtering Aegis and his team of Paragons, Damocles hopes to crush the symbolic face of this new generation of heroes.

Hugo is equally motivated to stopping Damocles’ reign of terror, bringing him closer to a shadowy powerbroker hell-bent on burning the current world order to ashes. But Hugo’s efforts are derailed when a close friend is corrupted by an ancient evil that could plunge San Miguel and beyond into nightmarish chaos.

Now he is forced to make an impossible choice - stop Damocles, or save his friend's life. The only option this young hero has is to roll the dice, causing destructive consequences no matter what he chooses.

United We Stand is a rollercoaster ride from start to finish dealing with magic, time travel, trust, betrayal, and super hero slug feasts. The storylines could be taken from your favorite comic book, but comes from diverse and inclusive world with characters hailing from every race and creed.

The writing style, narration, and voice acting all mimic what I imagine having a comic book read to me would sound like, with some of the descriptive passages seeming reminiscent of an original comic book script.

not a good follow up to a great series

This book was very anticipated but when read was a huge let down. The story introduced so many different characters I couldn't keep up. The plot was very predictable and the lead ups left me shaking my head. The obvious death of important individuals or kidnapping goes unnoticed for several weeks by heroes and government is so far fetch I had to stop reading . The ending is a obvious ploy to buy the next instead of relying on the stories merit. Thanks for ride CC and I hope your next book series stays true.

Well read by Narrators. The characters were likable or rotten as the case should be. I just get so frustrated with cliffhangers!

This series seems to be written by a sex starved teenager. Starts out great but the series quickly falls off a cliff with random magic users and werewolves being introduced in a clumsy way to a superhero verse. Beyond that, readers don't need a sex scene in -every- chapter. While there is a time and place for that in stories, this author seems a bit stuck on that and it detracts from the story.

This book continues the fantastic story of heroes in an alternate earth. The story line is great and keeps the reader/ listener engaged in every detail. I really hope that C.C. Ekeke is working on the next book now. It has been a really engaging Book series.

This book was pretty confusing to me, this could just be me but i don’t remember Max being introduced to the story. It felt like she was just put there and was completely normal. Was there another book i missed? I don’t remember her being in book 4. Plus this is getting out of hand with all the time traveling, magic, and alien stuff, i missed when it was just a simple superhero story. And i dont like that cliffhanger, not a fan of it.

I hadn't even finished the book before I found myself begging for the next one!!!!

Keeps getting better and better

Loved it can't wait for the next book! I love how real CC Ekeke makes his books and the suspense that he leaves you in in the last chapter is pretty crazy.