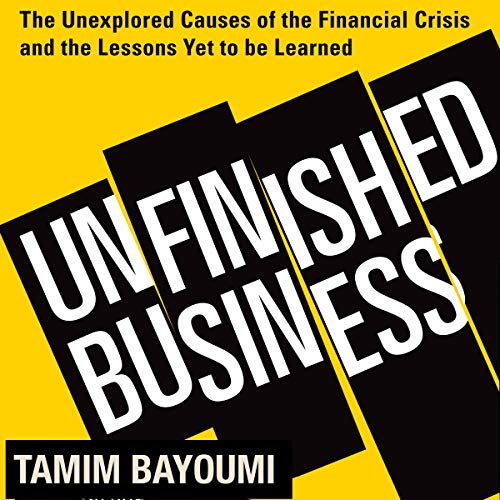 There have been numerous books examining the 2008 financial crisis from either a US or European perspective. Tamim Bayoumi is the first to explain how the Euro crisis and US housing crash were, in fact, parasitically intertwined.

Starting in the 1980s, Bayoumi outlines the cumulative policy errors that undermined the stability of both the European and US financial sectors, highlighting the catalytic role played by European mega banks that exploited lax regulation to expand into the US market and financed unsustainable bubbles on both continents. US banks increasingly sold sub-par loans to under-regulated European and US shadow banks and, when the bubbles burst, the losses whipsawed back to the core of the European banking system. A much needed, fresh look at the origins of the crisis, Bayoumi’s analysis concludes that policy makers are ignorant of what still needs to be done both to complete the cleanup and to prevent future crises.

The audiobook is published by University Press Audiobooks.

“Bayoumi has succeeded in saying something both new and true about the financial crisis of 2007-12 in this important book.” (Financial Times)

”Provides excellent insights into how this led to the crisis, especially in terms of the different economic philosophies competing for influence.” (Choice)

“Bayoumi's impressive coverage of both sides of the Atlantic sheds new light on the crisis.” (Library Journal)

it was very technical and a bit over my head. But it was extremely thorough and enlightening

Sophisticated, really digs into the dynamics

This work lifted me out of the simpler good-guys-bad-guys model I had, showing how, alongside the mistakes of regulators, the incentives of all players fed into a machine hurtling toward its own collapse. There is a fine picking-over of the distinct, but connected evolution of banking systems in USA and Europe, that progressed inch by inch into this unstable system. This can be seen as yet another place where the once-upon-a-time certitudes of globalization alongside lingering individualism and jealousies of nation-states had unseen conflicts and undercurrents bound to resurface jarringly in our lives. Creative actors will always reshape advantageously into the spaces between rules and rulers. This includes the small investor and depositor as much as the big sophisticated firm. At present most actors are looking elsewhere, with an unfixed system that bodes to crash again. I can think of no better primer than this one (assuming a reasonable sophistication going in.)