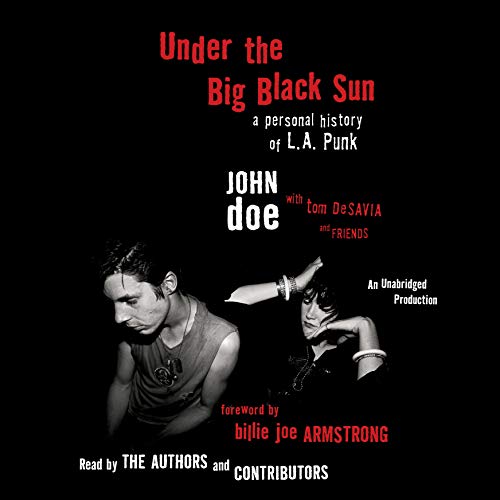 Under the Big Black Sun

Under the Big Black Sun

Under the Big Black Sun explores the nascent Los Angeles punk rock movement and its evolution to hardcore punk as it's never been told before. Authors John Doe and Tom DeSavia have woven together an enthralling story of the legendary West Coast scene from 1977 to 1982 by enlisting the voices of people who were there. The book shares chapter-length tales from the authors along with personal essays from famous (and infamous) players in the scene. Additional authors include: Exene Cervenka (X), Henry Rollins (Black Flag), Mike Watt (The Minutemen), Jane Wiedlin and Charlotte Caffey (The Go-Go's), Dave Alvin (The Blasters), Chris D. (Flesh Eaters), Jack Grisham (T.S.O.L.), Teresa Covarrubias (The Brat), and Robert Lopez (The Zeros, El Vez) as well as scenesters and journalists Pleasant Gehman, Kristine McKenna, and Chris Morris. Through interstitial commentary, John Doe "narrates" this journey through the land of film noir sunshine, Hollywood back alleys, and suburban sprawl - the place where he met his artistic counterparts, Exene, DJ Bonebrake, and Billy Zoom - and formed X, the band that became synonymous with and in many ways defined L.A. punk.

Under the Big Black Sun shares stories of friendship and love, ambition and feuds, grandiose dreams and cultural rage, all combined with the tattered, glossy sheen of pop culture weirdness that epitomized the operations of Hollywood's underbelly. Listeners will travel to the clubs that defined the scene as well as to the street corners, empty lots, apartment complexes, and squats that served as de facto salons for the musicians, artists, and fringe players that hashed out what would become punk rock in Los Angeles.

A love song to the early punk days in LA.

Would you listen to Under the Big Black Sun again? Why?

I will without a doubt listen to Under the Big Black Sun again. There were so many brilliant moments that were expressed in such a way that it needs to be listened to more than once. Great stories that take you right there into the punk scene in Hollywood. I was there but I wasn't up close and personal with all the bands like these folk. Well, some but not as many. Everybody is in this book and they don't hold back.

There are too many great story tellers and stories to mention but I do have to say John Doe. His stories are all poignant, to the heart of things and gripping. Mike Watt did an amazing job, has the best voice. Robert Lopez told the sweetest of the stories and Tom DeSavia writes with a great life force. Jack Grisom killed it with his in your face story that I found appealing because he comes across honest and to the point. Quite startling at times.

This was by far the best audio version to ANY book I have listened to because all the authors lend their voices to their own stories. They all did an amazing job. Loved it and plan to keep Under the Big Black Sun on my desk top forever.

Much of this was close to home because I went to many of the same shows, knew many of the same people, went to the same clubs and stomping grounds and listened to the same music. In a way, this took me home, back to a past that I think of with mixed feelings but mostly good. It took me back to my coming-of-age story and I ate it up!

X always put on a good show and I was happy to be blessed to be amongst this group of outcasts and artistic types. The music the center stone to it all and this band put their souls into it. This book should definitely be read and for certain it's the old punks that will enjoy it the most. There is a real feeling of history here.

I loved being in John Doe's shoes. Most of us will never know what it feels like to be that alive. To be on stage and sharing a performance that feels as true to God that a non-religious person can feel. He takes us there with him and the view is spectacular.

Exene Cervenka writes with passion as she shares her love of The Doors and the music. In the day, I loved her Ike this and as a fan we didn't need her to be any more glamorous than she already was. To me, she was truth and it came across in the music she sang.

The common trend in most of these stories are about how things eventually started to change in LA. As she says, "That openness and nurturing nature of the scene in 1977 and thereabouts was changing."

The deterioration of something good is always a disappointment.

One of the better music books I've read

And I've read a lot of music books. The wildly divergent viewpoints regarding the same events was a truly excellent editorial decision. Highly recommended.

A vivid portrait of a blazing moment in time.

What did you love best about Under the Big Black Sun?

The magnitude of this collection really starts to hit as you hear voice after voice detail the stories of their punk soaked youth.

Under The Big Black Sun is more than just a book, it's a historical document, which peels back the layers of life, music, and rebellion of the early LA punk scene.

Die hard fans will love this book, but anyone curious about music evolution in America will be transported by the simmering and shimmering energy of this singular moment in music history.

Amazing for musicians and fans of all music, not just punk

Covering the birth, life and “death” of punk, this book is a heartbreaking treasure trove for anyone who ever picked up an instrument and set out to make music. Amazing stories in this collection. As a musician, I was riveted, even though I had only passing familiarity with most of the bands.

This is also a story about America, about how weirdos, freaks and have-nots founded their own American culture and saw it flourishing, then whither when their creation rose to unexpected heights.

The History of LA Punk...Told Loud and Clear!

John Doe and many others that were there and lived every moment of it, tell the story of the Los Angeles Punk scene and do so brilliantly. I love the fact each person that wrote a chapter is brought on board to read their respective chapter. A great move and one thing I love about audio books such as this one. A beyond great listen and full of history and depth.

Great listen, love how each author does their own reading and there are nice audio clips of songs in between chapters. Great account of the early LA punk scene, how it went from an inclusive and eclectic scene to something narrow, vile, and predictably toxicity “masculine” is a sad commentary, but you hear from all perspectives, this is a great listen and One that you could listen to multiple times.

Many Voices -Each Wanting Freedom from Conformity

I loved this audio book for its performances, writing, and raw honesty. The format of this book is my favorite thing about it. Each contributor reads their own words, which is very powerful. It is also a relief - just in case the reader is not enjoying the style of a particular contributor. I also appreciated that many perspectives of the events are represented and respected. This work met (even exceeded!) my expectations. I expected it to document all of the ways that LA Punk rock influenced music and culture. An added bonus was the way the contributors described and brought attention to the entire scene, especially the bands and venues from the surrounding areas in Southern California.

I caught the tail end of this movement, while growing up in AZ and later CA. I saw many of these bands live. I loved the stories, loved that the contributors read their own chapters, and I loved the musical interludes. Fun, nostalgic listen.

X is one of the greatest American bands of all time, and this audiobook perfectly captures the LA scene they were born from. A true cast of characters indeed. Wow, the different narrators were as much fun as the story and helped me feel like I was part of that scene. Highly recommended.

The next best thing to being there

When people talk about punk rock, London and New York are always part of the conversation. And I always bring up the importance of Los Angeles. Yes, I love The Clash and the Ramones, but the L.A. punk scene gave us X, Black Flag, Los Lobos, The Blasters, and even The Go-Go’s. Narrated by those who were there, this is essential music history.