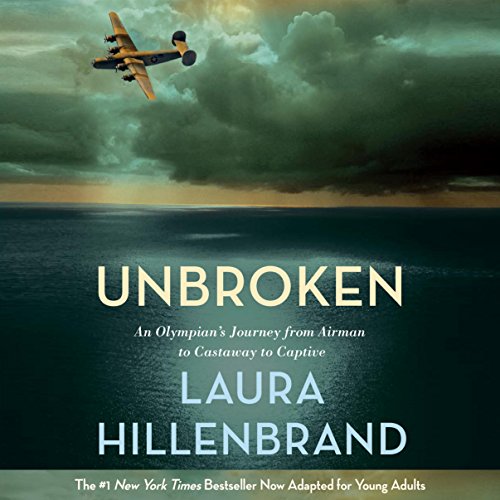 In this captivating young adult edition of her award-winning number one New York Times best seller, Laura Hillenbrand tells the story of a former Olympian's courage, cunning, and fortitude following his plane crash in enemy territory. This adaptation of Unbroken introduces a new generation to one of history's most thrilling survival epics.

On a May afternoon in 1943, an American military plane crashed into the Pacific Ocean and disappeared, leaving only a spray of debris and a slick of oil, gasoline, and blood. Then, on the ocean surface, a face appeared. It was that of a young lieutenant, the plane’s bombardier, who was struggling to a life raft and pulling himself aboard. So began one of the most extraordinary sagas of the Second World War.

The lieutenant’s name was Louis Zamperini. As a boy, he had been a clever delinquent, breaking into houses, brawling, and stealing. As a teenager, he had channeled his defiance into running, discovering a supreme talent that carried him to the Berlin Olympics. But when war came, the athlete became an airman, embarking on a journey that led to his doomed flight, a tiny raft, and a drift into the unknown. Ahead of Zamperini lay thousands of miles of open ocean, leaping sharks, a sinking raft, thirst and starvation, enemy aircraft, and, beyond, a trial even greater. Driven to the limits of endurance, Zamperini would respond to desperation with ingenuity, suffering with hope and humor, brutality with rebellion. His fate, whether triumph or tragedy, would hang on the fraying wire of his will.

Featuring an exclusive interview with Zamperini, this breathtaking odyssey - also captured on film by director Angelina Jolie - is a testament to the strength of the human spirit and the ability to endure against the unlikeliest of odds.

"This adaptation of Hillenbrand's adult best seller is highly dramatic and exciting, as well as painful to read as it lays bare man's hellish inhumanity to man." (Booklist, starred)

"This captivating book emphasizes the importance of determination, the will to survive against impossible odds, and support from family and friends. A strong, well-written work." (SLJ)

Great Audio Book for Parents & Kids In The Car

This is a wonderful story of strength, faith and making it through extremely difficult times and coming out stronger on the other side. I read the original version and was happy to see the young adult version in an audio book format. My 10 year old son and I really enjoyed listening to it in the car. One word of warning for parents though; the F word is used in one place when they are talking about being in a Japanese POW Camp and they are telling how one of the Japanese guards made one of the American soldiers teach him English. The soldier taught the guard to say the F word as part of an everyday greeting. It was actually a funny tidbit, but just be ready for the one word in case you are listening with kids. Also, some of the descriptions if abuse in the Japanese POW Camps and the sharks trying to eat the men in the boat may be a little intense for young children. But not really worse than some of the popular stories many of us read as kids.

We all loved it!

I listened to this on a long car ride with three boys between 11 and 13. My thirteen year-old actually stopped playing a video game to listen (a first) and my eleven year-old didn't complain about the long trip even once (another first).
The story is fascinating, and the intense and gruesome parts from the adult version are toned down perfectly for older kids and still good for adults. I think I would have let my kids listen to this as young as 8 or 9 maybe.
One warning , if you are heading to the beach - there's a fair bit about shark attacks.

This is my second time to read this book. I consider this one of the greatest books I have ever read. And the best part is how it ends. Captivating throughout it shows how a man was able to find peace and forgiveness after unimaginable and unending suffering. Don’t waste your time going to the movie. Please read this book

I love this story! Very inspirational. Besides the one f word, it was just amazing.

So engaging! What a magical and inspiring story. Now I want to see the movie!

An amazing, riviting and inspirational story of resilience, perseverance, and positivity. Thank you for your service.

It's the best book I ever read

Loved the story but disappointed the author chose to include the F word in chapter 29, thus eliminating it from being used in my classroom.

I enjoyed this book so much. It made me sigh, cheer, cringe in fear, and even burn with anger. But the end is spirit and soul lifting and I wept with a lump in my throat.
Louis Zamberini missed going to the Olympics by a hair and enlisted at the end of WWII. A daring flyer-bomber who survives a crash in the ocean, only to become a POW in a Japanese prison. What happen there, later for years, and then the moment of redemption is truest magnificent. I heartily recommend this book.

Amazing book with a great story

I think the only think I didn’t like was nothing it was the best book I have ever read
The sound effects and the speed of the book I think my favorite and most executed part of the book.

One of best biographies ever read!

Will keep you up at night, move you to laughter, then to tears, inspire you and you will walk away encouraged and excited to share this amazing life!