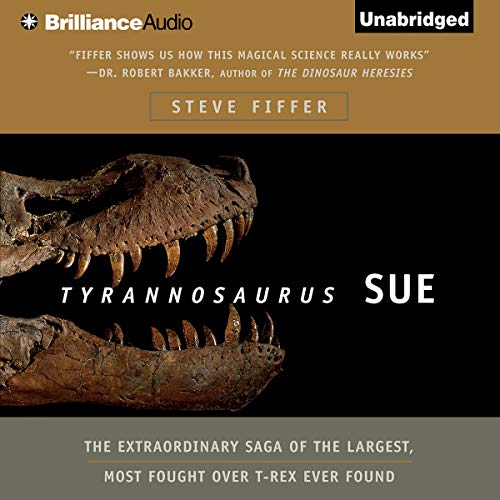 In 1990, Peter Larson, with his team of commercial fossil hunters from the Black Hills Institute, discovered the most complete Tyrannosaurus Rex specimen in history. He dubbed it "Sue" after the field paleontologist who first saw it sticking out of a sandstone cliff on the ranch of Maurice Williams, a Cheyenne River Sioux Tribe member in South Dakota's badlands. Because the skelton was 90% complete, its study promised to yield up priceless information on the life and habits of the T Rex. Larson made out a check to Williams for $5,000 to purchase the bones, and planned to make Sue the centerpiece of a museum that he and his brother had dreamed for years of building.

In 1992, however, federal agents raided the Institute and seized Sue, triggering the greatest custody battle in paleontological history. In the end, Sue would be auctioned off to Chicago's Field Museum.

Tyrannosaurus Sue is the definitive insider's look at how this dramatic discovery, and the ensuing legal struggle, played out. Everyone from the Jurassic Park crowd of dinosaur lovers to those who delight in a well-told, exciting true story will enjoy this audiobook.