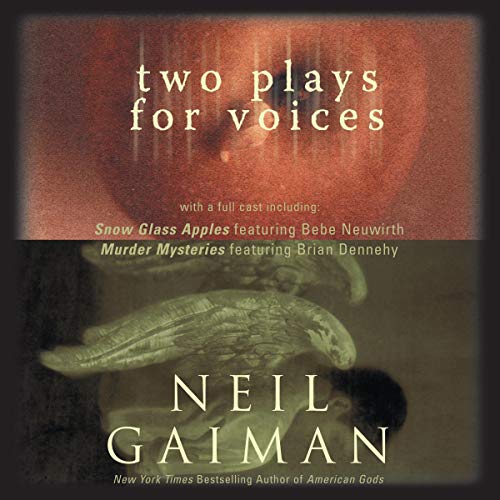 These are two original plays for voices from the critically-acclaimed, best-selling, and award-winning author of American Gods.

In Snow Glass Apples, once upon a time there lived a young princess with skin as white as snow, with hair as black as coal, with lips redder than blood. Most people think they know what happens to this young unfortunate girl. Most people are wrong. Tony-award winning actress Bebe Neuwirth stars as a wise queen who wants nothing more than to reign over her kingdom peacefully but is forced to match wits with an inhuman child who has an unnatural taste for blood.

In Murder Mysteries, a mystery noir set in heaven's City of Angels before the fall, the first crime has been committed. It is an awful one. While the angelic hosts labor to create the world and its workings, one of their number is mysteriously slain by one of their own. Brian Dennehy stars as Raguel, Angel of Vengeance, who is mandated by Lucifer to discover both motive and murderer in this holy dominion that had so recently known no sin.

I Love this Author

Neil Gaiman is an absolute treasure of a writer. I could say he takes familiar stories and reworks them from unique perspectives. But that would be a gross understatement. These "plays" have a really high "Oh My God!" count.

But I was disappointed with these recordings. They come from the sci-fi channel's original series called "Seeing Ear Theatre", which is published on their website. The problem is that there is an awful lot of "production noise" (music, background sounds, etc) which is intended to add to the ambience of the performance. Unfortunately, on my Otis player the noise tended to obscure the dialogue.

So here is my suggestion. Buy this recording for the pleasure of listening to it on some really good speakers on your PC. The performances are truly wonderful.

One of my favorite audiobooks ever.

Wow! Neil Gaiman, to me, is the best writer alive today. He may be one of the best writers ever. This is a treat. I had read Snow Glass Apples before, but listening to the whole Audio production with Bebe Neuwirth as the Queen made it even better. I've read Smoke and Mirrors and I remembered the first part of the Murder Mysteries story as a real-life anecdote that Gaiman lived when in LA. Either I'd never read the fictional story, or I had completely forgotten, but I doubt it. It's fantastic. Every word, every character, every dialogue... the whole production, casting, production, music and, of course, Gaiman's prose, receive five ginormous stars from me.