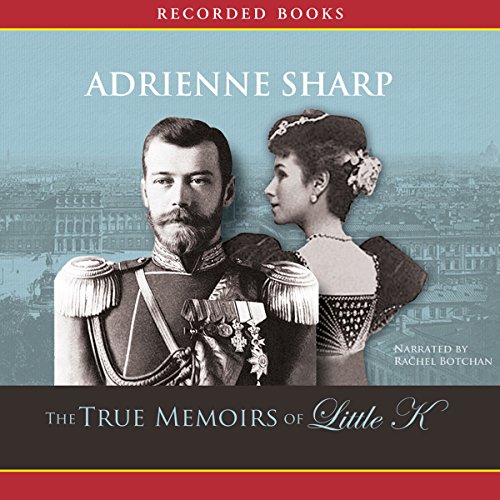 Booklist called Adrienne Sharp’s White Swan, Black Swan, her acclaimed collection of short stories focusing on the world of dance, “breathtaking” in a starred review. Here Sharp returns once again to the stage in a beautifully crafted tale of love, ambition, and a country’s growing political unrest.

Now 99 years old and living in Paris, former prima ballerina of the Russian Imperial Ballet Mathilde Kschessinska sits down to write her memoirs. At the age of 17, Mathilde caught the eye of Nicholas II, and the two began a passionate affair. But once Nicholas became tsar and married, Mathilde was cast out of his life. Heartbroken, Mathilde began affairs with two of Nicholas’ cousins. Yet she never forgot where her heart truly lay. A grandiose portrait of Russia before the fall of the house of Romanov, The True Memoirs of Little K effortlessly blends historical fact with sumptuous fiction. Sharp’s elegant prose is perfectly captured here by narrator Rachel Botchan.

I just finished this marvelous epic, and I have goosebumps. I've read many Romanov accounts both fictional and non-fictional, so is there really anything else to learn? Yes. Sharp tells the story through the lens of a prima ballerina merging the world of the stage with the stage of royal life. The main character, while at times petty and arrogant, demonstrates wit and resourcefulness that makes her ultimately a worthy heroine. The prose is approachable, vivid and occasionally brilliant but not pretentiously so, which is quite refreshing. The reader does a fine job, except I would have preferred an English or European accent. Somehow this exotic world isn't fully realized by American accents. Still, a five-star literary experience.