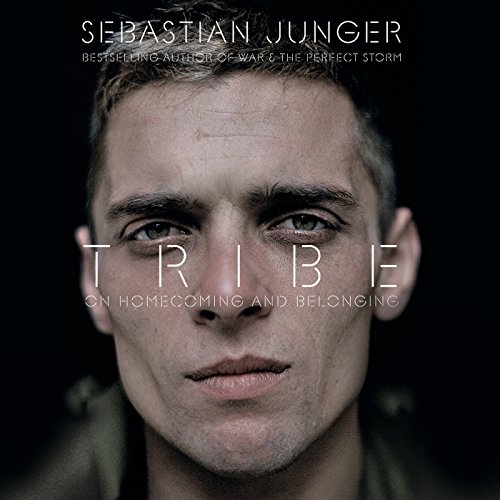 Tribe: On Homecoming and Belonging

Tribe: On Homecoming and Belonging

From the author of The Perfect Storm and War comes a book about why men miss war, why Londoners missed the Blitz, and what we can all learn from American Indian captives who refused to go home.

Tribe is a look at post-traumatic stress disorder and the challenges veterans face in returning to society. Using his background in anthropology, Sebastian Junger argues that the problem lies not with vets or with the trauma they've suffered but with the society to which they are trying to return.

One of the most puzzling things about veterans who experience PTSD is that the majority never even saw combat - yet they feel deeply alienated and out of place back home. The reason may lie in our natural inclination, as a species, to live in groups of 30 to 50 people who are entirely reliant on one another for safety, comfort and a sense of meaning: in short, the life of a soldier.

It is one of the ironies of the modern age that as affluence rises in a society, so do rates of suicide, depression and, of course, PTSD. In a wealthy society, people don't need to cooperate with one another, so they often lead much lonelier lives that lead to psychological distress.

There is a way for modern society to reverse this trend, however, and studying how veterans react to coming home may provide a clue to how to do it. But it won't be easy.

"An incredible work of frontline journalism." ( Independent, Books of the Year)
"In his acute observations of soldiers both in battle and at rest, Junger paints a vivid and realistic portrait of the fighting in Afghanistan, often bitterly funny and desperately sad." (Patrick Hennessey, Literary Review)
"The bloodiest and most compelling book you are ever likely to read on the enduring carnage in Afghanistan." ( The Times)
"One of the best books about war you will ever read. Beautifully written in unshowy prose and thoughtful, honest and profound. A masterpiece of the genre." ( Mail on Sunday)
"An intense account.... Junger uses his documentary skills to ask his comrades tough questions about killing, dying, loyalty and friendship. The result is a book not just about war, but about the limits of courage and, yes, love under pressure." ( Guardian)
"Absorbing and original.... Junger has found a novel and interesting lens through which to view the conflict in Afghanistan, and he captures many things a lesser writer might miss." ( New York Times)
"It takes a very good book to carry off a title as portentous as War, and Sebastian Junger has written one.... An outstanding war report: a precise and gripping account of some of the fiercest battles involving American soldiers in recent times." ( The Economist)

Good listen. The author tries as best as he can to answer questions regarding happiness and modern western society.

Time to turn the world around!

Loved it! struggled a bit but got there. The narrator was good. Time to change!

A guide for lost Young men

Sometimes you listen someone put wods on something that was already known. Tribe was that for me.

As one who was not in the military but moved my family of seven overseas in a remote desert region, experienced hard things and a shame/honor/communal society, then moved to a boarding home to raise 25+ teens with a staff of five, only to return to the west after 5 years, I saw for myself much of that this book identifies. It helped me appreciate the lives of our military friends and more clearly understand our own challenges when reentering American culture and the isolation we felt - as well as the strange longing to return to our former lives, our tribes.

I can't think of a more important book for Western civilization and especially the USA at this moment.

This book is nice and short. The reader is a bit monotone at times but otherwise makes a good job of reading it out. The stories and studies shared in this book should be required reading nowadays in my opinion. It says something about how we've reached an extreme in modern society, that will likely lead to our own destruction.

We need to get back to our roots and merge that with modern society so we can live fulfilling lives.

The most satisfying parts were those about tribal native American societies and the mining stories.
Overall, plenty of insights to love and think about, also to apply in the real world.
I am happy with the purchase.

The book speaks well to how difficult it is to be human in a culture that insists on pretending that everything is okay even amid horrible suffering and calamity.

my the most favourite book on audible

Loved the great personal and historical stories of solidarity and tribalism.

The only very slight criticism would maybe be the structure. Everything melted together a bit.

As good as I'd been told

Fascinating and captivating. I found myself finishing this book in no time. It really hits home some of the most important aspects of humanity.