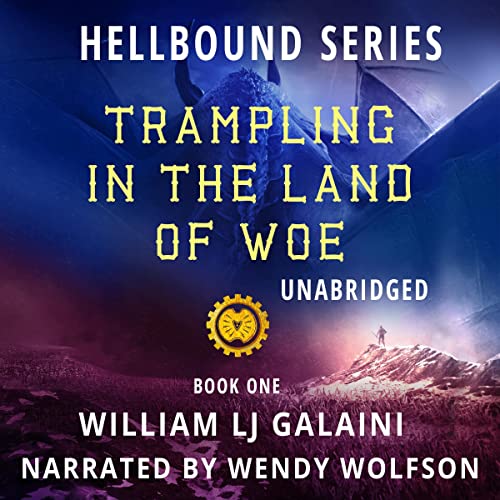 Trampling in the Land of Woe

In New Dis, Purgatory, there is no rest for the dead. Sprouting from the rim of Hell’s depths, not even this bohemian city of the afterlife—full of mercantile enterprises, engineering innovations, and political intrigue—is immune to the tragedies filtering down into it as war and endless suffering rage on Earth above.

Hephaestion, general, confidant, and lover of Alexander the Great, has one goal: rescue Alexander from the torment of Hell. Yet far more souls bar his way than he’d ever anticipated, and Hephaestion, with the help of new friends and comrades, will have to use both brains and brawn against some of the underworld’s most unsavory opponents.

Evolved Publishing presents a tale set in an industrialized Dante’s Inferno with steampunk trappings, in the first book of the Hellbound series or religious sci-fi/fantasy adventures.

“Fantasy readers looking for something different—say, Dante on steroids—will find everything they are looking for right up to the unexpected conclusion...” (Diane Donavan, Midwest Book Reviews)

the author weaves an intricate and interesting story and manages to take the reader on a pretty amazing journey through a portion of Dante's hell. Central to this first book are themes of love, loss, longing, and most importantly journey to find peace.

this is one of my favorite book series the underlying message of the story is a wonderful study on love and how it effects us the dantes inferno steampunk backdrop is interesting and the story and action moments are fun to read .Wendy Wolfson did an entertaining job bringing the characters to live and made several of my favorite scenes from the book better with her performance of the dialog