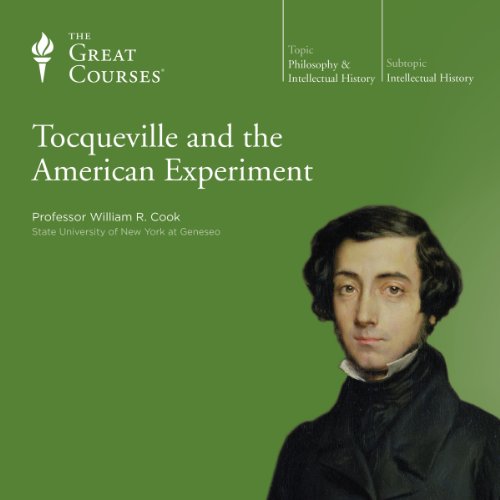 Tocqueville and the American Experiment

Participate in a spirited exploration of Alexis de Tocqueville and his unique observations of this young nation that resulted in the two volumes of Democracy in America. How is it possible that perhaps the greatest book about U.S. democracy ever written was penned by a Frenchman visiting this country 175 years ago? Why is it still relevant in today's ever-changing political landscape?

Tocqueville, a 25-year-old French nobleman who journeyed here in 1831, wanted to observe firsthand the successful political experiment that was evolving in the United States and take his findings home to France, which was itself trying to shape its own young democracy. The remarkable book that resulted has been called both the best book ever written about democracy and the best book ever written about America.

Published in two parts, one in 1835 and the second in 1840, it reveals, in its 700 pages, insights about democracy and the American character that have led both liberals and conservatives to claim Tocqueville as their own, often by citing the very same passages, and often out of context. Over the course of 24 spirited lectures, Professor Cook leads you on an engaging and energetic discussion on Tocqueville, his journey, his writing of Democracy in America and, most of all, his thoughts on the young nation he was observing.

You'll learn what Tocqueville had to say about the meaning of family in a democracy, race and the damage done by slavery, the crucial role of women, religion as a moral guide, the dangers of turning religion to political ends, and more. Today, Tocqueville can be both a guide and a reminder of the cultural context in which democratic institutions can develop and flourish.

The author took up Tocqueville prior to running for office a few years prior. If what you are looking for is an understanding of Tocqueville's visit, impressions of America and their relation to democracy as understood by the author and Tocqueville, the author does an admirable job.

It is only natural to ask questions about the Tocqueville visit in relation to the founding or in relation to today's society, but the author is focused solely on Tocqueville's firsthand account of his experiences in America. For the author to have veered off into these tangents, would have detracted from the focus, clarity of the book. Tocqueville spent almost a year in America and seems to have been an exceptionally insightful young man. This book will certainly challenge and inform your views of the Republic, democracy, and America in the early 1800s. Highly recommended.

This is a long book (24 courses) and that is perhaps the only criticism I had of the course. Much of what Tocqueville wrote is of interest to today and/or in context of the founding, but almost all readers will find their interest during the course to wax and wane. For me there were only a few topics where I just didn't have much of interest. Women in America, the sciences and education in America. Its not that the points weren't of interest but I feel as if the 1830 ish view and today's view are not an interesting juxtaposition, which is a big reason why I read courses / books like this.

Book is highly recommended for anyone looking to understand Tocqueville's visit and its relation to democracy. This is a cornerstone course. It won't answer any of your burning questions but it will certainly lay a strong foundation for understanding the roots of democracy in America. With democracies failing all over the world I think a course like this should be required reading for old and young alike as we are almost certain to live to see whats old come new again.

I consider myself a tough critic of political commentary, but in this course I thought Professor Cook did an amazing job of presenting a well-organized and thoughtful analysis of de Tocqueville's extraordinary "Democracy in America." Cook seems to have made the study of this work one of the focuses of his academic career, and his presentation includes many relevant facts that are not included in the book itself but are very helpful in understanding how de Tocqueville arrived at some of his conclusions and how, in some cases, he might have been mislead by relying on incomplete or inaccurate assumptions about the county he was traveling through. Cook also sprinkles in a number of personal anecdotes to illustrate the practical implications of some of de Tocqueville's observations and for the most part I found those anecdotes helpful and not distracting. I also felt Cook's presentation was free from any obvious personal political biases. Even of someone feels the need to read the original work (which at this point I do not, although I am considering buying a copy of the book to refer to from time to time), I would recommend listening to this presentation first since I suspect doing so would sharpen the reader's ability to think critically about what they were reading. I tremendously enjoyed this course.

Professor Cook speaks with enthusiasm and at a pace that seemed appropriate for the material -- i.e, fast enough to retain the listener's interest but not so fast that the material could not be absorbed. So four stars for the vocal performance.

What made the experience of listening to Tocqueville and the American Experiment the most enjoyable?

I think Professor Cook's enthusiasm for de Toqueville and the fact that he developed this course out of his own personal interest makes for very engaged listening. Reading the class notes that are included with this purchase expand and cement my new knowledge. Dr. Cook is a very organized thinker.

What other book might you compare Tocqueville and the American Experiment to and why?

I can only compare this book to my first and incomplete read of Democracy in America by de Toqueville. I stopped reading the original text because I felt I was only comprehending it on the most superficial level. I am taking this course so i can know more about the man, the times and the themes of the book. I expect that I will then be able to read Democracy in America in full and with greater understanding and depth after this class. The bonus is that Professor Cook steers the listener/reader to de Toqueville's journals, a biography .and a website to continue study on different aspects.

What about Professor William R. Cook’s performance did you like?

I found his voice a bit difficult to listen to at first until I realized how compelling his knowledge and enthusiasm was for the topic. Then I forgot about his voice and appreciated what a good educator he was. His enthusiasm for the topic is contagious.

I think I am fascinated about de Toqueville, the man, the times and the enduring observations he made. The purpose of this course is to find how his writings can be used to inform our thinking about democracy in today's times. Also, there are many tidbits of knowledge that are super fun to know like the movement to change prisons into penitentiaries so inmates could develop penitence for their crime instead of just learn how to be a better criminal! I guess that was rehabilitation 1.0.

I am inspired to learn more. Dr. Cook is opening the door to easy learning about a classic on democracy and America.

Truth is timeless. Dr. Cook does a great job of highlighting the foundational truths that are timeless and that Americans should hold dear, strive to implement and fight for their preservation.

General outline of de Tocqueville’s Democracy in America was fine. However the lecturer spent much too much time talking about himself and his village in upstate New York. I found that annoying.

I cant get past his voice. It causes feelings of disgust in me even after many hours of exposure. I had to return this. I strongly dislike Cook.
I can't hear someone repeatedly say "gee wiz" with that speech impediment and willfully continue to listen.
There is also a lot of filler and not very many important points about Tocqueville's theories and ideas which is too bad because they are important and can be very interesting and useful.
Hard pass :(

everyone should hear this!

great course! everyone need to take this course. very informative and interesting. listen to the course you will not be sorry.

Fantastic performance. Deep and entertaining at the same time. Notable explanations of the concept of local democracy by examples of present day towns' decision making.