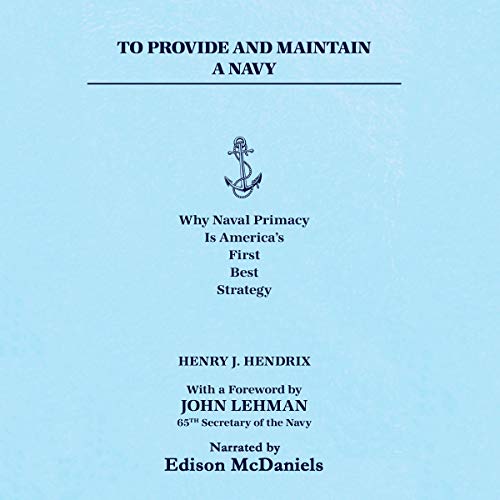 To Provide and Maintain a Navy

The national conversation regarding the United States Navy has, for far too long, been focused on the popular question of how many ships does the service need?

To Provide and Maintain a Navy, a succinct but encompassing treatise on sea power by Dr. Henry J. "Jerry" Hendrix, goes beyond the numbers to reveal the crucial importance of Mare Liberum (Free Sea) to the development of the Western thought and the rules based order that presently governs the global commons that is the high seas.

Proceeding from this philosophical basis, Hendrix explores how a "free sea" gave way to free trade and the central role sea borne commercial trade has played in the overall rise in global living standards. This is followed by analysis of how the relative naval balance of power has played out in terms of naval battles and wars over the centuries and how the dominance of the United States Navy following World War II has resulted in seven decades of unprecedented peace on the world's oceans.

He further considers how, in the years that followed the demise of the Soviet Union, both China and Russia began laying the groundwork to challenge the United States maritime leadership and upend five centuries of naval precedents in order to establish a new approach to sovereignty over the world's seas.

It is only at this point that Dr. Hendrix approaches the question of the number of ships required for the United States Navy, the industrial base required to build them, and the importance of once again aligning the nation's strategic outlook to that of a "seapower" in order to effectively and efficiently address the rising threat.

Excellent case for the benefits of a strong Navy.

Dr Hendrix is very effective at laying out the reason for a strong Navy. Also, this work states the case for a stronger industrial base to support the needed growth.