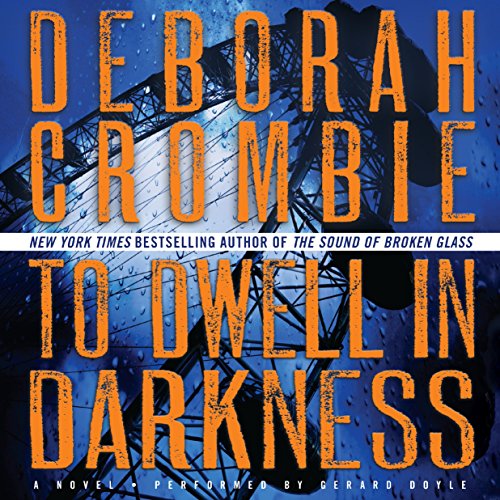 To Dwell in Darkness

In the tradition of Elizabeth George, Louise Penny, and P. D. James, New York Times best-selling author Deborah Crombie delivers a powerful tale of intrigue, betrayal, and lies that will plunge married London detectives Duncan Kincaid and Gemma James into the unspeakable darkness that lies at the heart of murder.

Recently transferred to the London borough of Camden from Scotland Yard headquarters, Superintendent Duncan Kincaid and his new murder investigation team are called to a deadly bombing at historic St. Pancras Station. By fortunate coincidence, Melody Talbot, Gemma's trusted colleague, witnesses the explosion. The victim was taking part in an organized protest, yet the other group members swear the young man only meant to set off a smoke bomb. As Kincaid begins to gather the facts, he finds every piece of the puzzle yields an unexpected pattern, including the disappearance of a mysterious bystander.

The bombing isn't the only mystery troubling Kincaid. He's still questioning the reasons behind his transfer, and when his former boss - who's been avoiding him - is attacked, those suspicions deepen. With the help of his former sergeant, Doug Cullen, Melody Talbot, and Gemma, Kincaid begins to untangle the truth. But what he discovers will leave him questioning his belief in the job that has shaped his life and his values - and remind him just how vulnerable his precious family is.

I have loved every one of Deborah Crombie's books since I read the first few in print some years ago. While I certainly have favorites, none have disappointed. But this latest, happily anticipated and awaited continuation of the story of Duncan and Gemma has satisfied in every way, way beyond expectations. The characters continue to develop in interesting ways, and this particular story segment is timely and well crafted. I find myself so enjoying the story that I want to hurry along, and at the same time I want to go slowly, holding off on completing the story and savoring every part. Sweet dilemma.

What did you love best about To Dwell in Darkness?

Deborah Crombie once again embroiders a touching yet suspenseful story.

Melody. She has her own interesting set of issues and seems to have been most deeply changed by the events of this story. I'm wondering how she'll fare.

The English spirit infused in the story. I'd be reading it with an American point of view and might miss things which he emphasizes.

Neither. It's not that kind of book. It's sit on the edge of your seat king of book.

Can't wait for next one.

I'm thinking of the stories more as installments rather than stand alone novels. a story is told amidst the main characters.

I discovered Deborah Crombie a couple years ago. She has become my favorite writer. I love her characters. I love the way she describes locations in a way that makes me feel I've been there. I love her intricate and surprising plots.

The mystery starts early in this book and keeps on until the end. I made the mistake of listening to it at bed time one night. I got so involved in the story I stayed awake much too late.

Gerard Doyle is one of the best narrators I've heard. I love the tone of his voice. He is able to distinguish the characters enough so that I always know who is speaking, yet his voice never overshadows the story.

One of my favorite authors.

Interesting detail moved along by the historical back drop. Personal story of the central characters serves as an excellent emotional backdrop.

I have always enjoyed this series. I believe that Deborah Crombie writes very well--and this was nicely narrated by Gerard Doyle.

In this book, Duncan and Gemma are each dealing with different cases, but Duncan has the greater role, as he is trying to trace the people who seem to have been involved with a frightening bombing incident at St Pancras' train station.

What I really like about this series is that it consistently presents very good mysteries to work out, and the main characters are a touching blended family who always manage to make their kids a priority--despite their busy lives policing. Something I'm noticing though, is that there seem to be so many peripheral characters, that it slightly detracts from Gemma, Duncan, their kids & close assistants in a way that feels (to me) as though the good tension that held with the earlier books is loosening a bit.

Nevertheless, in a series of this sort--where one has followed from the beginning, it is difficult to criticize--expanding acquaintances is the way of life--so it makes sense. But I think I did enjoy the earlier ones a bit more. Still recommend!

What made the experience of listening to To Dwell in Darkness the most enjoyable?

Having read all of her previous books in this series, it was like rejoining a family. She keeps the tension, however, by always adding new and complex characters. The mix of plot twists, domesticity and kittens is irresistible.To

Kitt, Toby, Gemma, Melody ... well, most of them. Why? They are real and familiar, yet human enough to keep one engaged.

The mother cat with the kittens, when first discovered, is a sure favorite. However, there are many. This question is pretty irrelevant in the context of a complex mystery.

Many. I shall not elucidate because I would not want to be a spoiler.

If only there were more living authors as talented as Deborah Crombie ....

I love this series though I’ve skipped those with the female narrator. In every book I’ve learned something along with a great story. Highly recommended.

Great read. A lot of action. Like able characters. Can not wait until the sequel

start with the beginning of the series

This is not a stand-alone book. I think you must need to read these in order. I was able to get 2 hours into it, but the plot line wasn't much advanced, it was mostly the individual characters being concerned for each other, that took up a lot of time. 1/5 of the way in and the many main characters have just touched base with each other and reassured themselves of each others safety. or not. (not giving anything away here). Didn't really care for it. the "detective"-ness of it is subpar. more of a character study i think, and since I have no previous involvement or investment in the the characters, it is completely uninteresting.