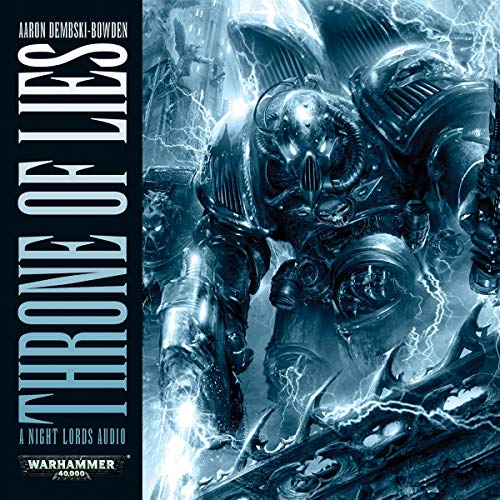 The Night Lords are among the most feared Chaos Space Marines in the universe. They prey on their victims from the shadows, stalking the faithful of the False Imperium in their ultimate quest to destroy the Emperor.

The warband of the Exalted, travelling aboard The Covenant of Blood, are recovering from the events at Crythe Primus. But their dark crusade against the loyal Imperial forces continues, and they will leave a trail of blood and terror behind them as they seek the truth behind the death of their primarch, the feared Night Haunter.

Well done audio drama that offers a glimpse into the Night Lords. Voice acting was good.

It felt wrong having different voice actors all of a sudden. Instead of the rough accented English in book one they're all speaking British-English? Doesn't do it for me.

Why. why? why do the nightlord s always make me so sad. lol. A good listen though.

This is probably the BEST audio book black library/games workshop has ever done. I was blown away.

Good for being cheap

While I miss the original Russian slavic ascents of the series, it was real nice to hear that Vox distortion. Worth the $6

Fantastic audiobook, dialogue was spot on and storyline was fun to listen too . If you liked the night lords you will like this book

extremely short. can be summed up in about one paragraph not worth the money. I should have just read the Wikipedia entry.

The art of Night Lords.

This was like a bath of warm water after days of sweating and struggling. It is just refreshing.

Great story with good acting and sound effects. Although it's more like an hour long audio drama, the story is by far one of the most well written and enrapturing tales I've heard from the 40k universe in a while.

good book but too short

I really enjoyed this book, but I found it to be too short. perhaps I am just too used to other 40k books that i have read or listened to. it was worth my time to have a listen though.