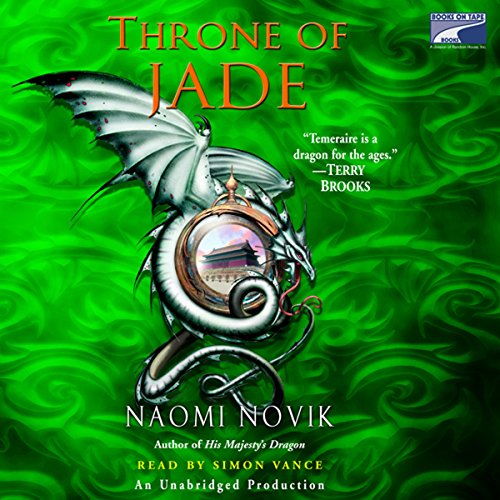 When Britain intercepted a French ship and its precious cargo, an unhatched dragon's egg, Captain Will Laurence of HMS Reliant unexpectedly became master and commander of the noble dragon he named Temeraire. As new recruits in Britain's Aerial Corps, man and dragon soon proved their mettle in daring combat against Bonaparte's invading forces.

Now China has discovered that its rare gift, intended for Napoleon, has fallen into British hands, and an angry Chinese delegation vows to reclaim the remarkable beast. But Laurence refuses to cooperate. Facing the gallows for his defiance, Laurence has no choice but to accompany Temeraire back to the Far East, a long voyage fraught with peril, intrigue, and the untold terrors of the deep. Yet once the pair reaches the court of the Chinese emperor, even more shocking discoveries and darker dangers await.

"Throne of Jade is a solid second entry in what is shaping up to be an intriguing series." (Bookmarks Magazine)

Loved the book, just thought I'd point out an issue with the recording. Part 2 of the download for me started about 40 minutes from the end of the book! by trial and error I discovered that the part 'begins' about 1 hour and 9 minutes after hitting play. So, if you have no idea what's going on when you start part 2, fast forward and give it another try as this is an excellent series.

This book continues where the first one left off. The relationship between the dragon and the sailor explored further, and to the point where It start become cumbersome. This book is pedestrian and repetitive compare to the first book. There is some intrigue in the story line, but that does not take place till last few chapters of the book. If I have to read this book over again, I probably will skip few chapters in the middle and not lose much in the story line.

Narration is great as Simon does a great job and because of his work, I was able to complete the book. If you have some time to waste go for this book, but it is as good as the first one.

I verified with Audible's folks that the stream had been fixed before downloading the files. They assured me it was but I remained skeptical. I just finished listening and all is well. Thank you Audible!

A fantastic continuation of book 1

This book continues the first book's excellent historically-based theme while nicely picking up the plot soon after the conclusion of the first book. I was pleasantly surprised to not only see little time lapse, but that this book did not introduce some random new plot device, but instead continues with the story of what China thinks about Temeraire's current condition, which was brought up many times near the end of the first novel.

Naomi displays once again an excellent knowledge of life at sea and the amazingly thought out logistics of her world. Wonderfully detailed descriptions of another of her world's civilizations fill the tail end of the novel.

I am still a bit annoyed with the odd time jumps that appear inside the story, but this time the beginning of important events are not cut off, which was my primary qualm with the first novel. Other than that, my only complaint are minor "conveniences" that would occasionally push the plot in favor of the good guys, such as a perfectly timed arrival or lucky not-quite-related events. Most of these, however, are things that could very well have happened and do not force you to "suspend your disbelief" much at all. Both of these complaints are minor and greatly overshadowed by the book as a whole.

From an audiobook standpoint, Simon Vance does a fantastic job portraying the various characters' voices, including very authentic-sounding accents! He also has a voice that is easy to listen to for long periods.

I really love these dragon tales but I found that this story could have used some structural shifting. The author got bogged down on the long sea journey and did not spend enough time on the China section. Really unbalanced seemingly. I did love the sea serpent attack and battle with the dragon. Awesome. Will keep reading these!

A bit of a drop off from the last book

I loved the first book in the series. But this book felt like a big drop off from the last book. It is a little boring in some parts even. Interesting but not action packed. I felt like it could have been edited down a little into a shorter book.

If you are expecting this book to be as good as the first, please throttle your expectations. The series overall is interesting but the author did the bare minimum to keep the reader/listener interested. I thought it was very interesting to hear about the Chinese during the book, but that was one of the few interesting parts of the book. I am hoping that the next book will continue on from the first book and we can put this book behind us.

The author does a great job immersing the reader into the time period of our faithful loving heroes. Dragons like I have never read about them before. original and imaginative. I will be reading more of these for sure.

The performer is outstanding as well. In an audiobook it's not just the author who has to sell the title it's the performer as well. Simon Vance was just as big a part in the immersion I felt in listening to this tale as Naomi was writng it.

A Good Continuation to the Story

The only reason I didn't give this story five stars is because it seems to escape from the setup it built in the first book and instead took the story to China. However, the epic settings and detailed scenes do the series justice.

I wish there were more books like this. Will Lawrence is a terrific hero.